The Albin Polasek Museum and Sculpture Gardens is located in Winter Park, Florida. It was the former home and studio of Czech-born sculptor and painter, Albin Polasek. The museum celebrates Polasek's life and work—comprising over 200 of his sculptures—as well as sculptures of other American artists. The museum offers guided tours of the house and the three-acre sculpture garden. The house was placed on the National Register of Historic Places in 2000.

View of the house from the back and the gardens. The statue is Polasek's "The Sower," one of his most famous statues. 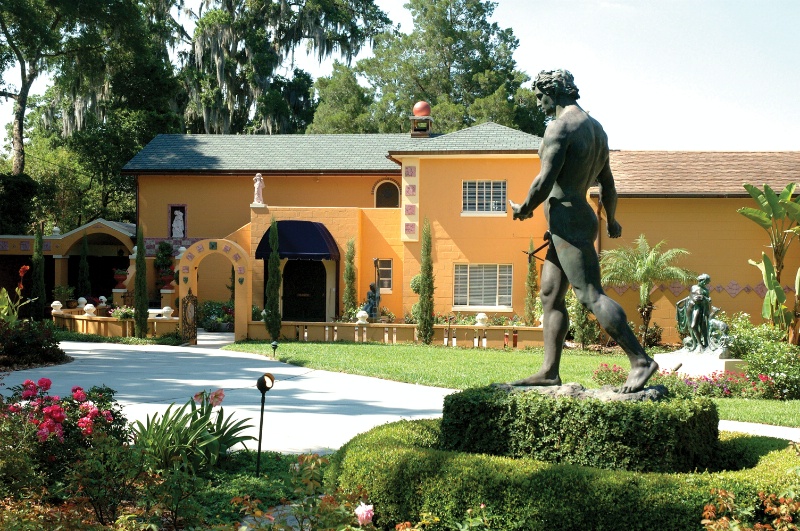 Albin Polasek was born in an area of what is now the Czech-Republic in 1879. His skills as an artist were apparent from early age. His brothers, who had moved to the United States in the late 1800s to attend seminaries to become Catholic priests, encouraged Albin to move as well. He arrived in 1901 and made his way to Minnesota. He attained American citizenship in 1909. Eventually, Albin became the director of the Depart­ment of Sculp­ture at the Art Insti­tute of Chicago and held that position for thirty years before retiring in 1949.

He moved to Winter Park that same year and established his home there. Over the years Albin expanded the house and continued to work despite a stroke that left him in a wheelchair in 1950. He decided to establish the Albin Polasek Foun­da­tion in 1961 and opened his house to visitors.