On August 19, 1846, U.S. Brigadier General Stephen W. Kearny dispatched two engineers to select a location for constructing a fort that would secure U.S. authority over Santa Fe, New Mexico. The United States had been at war with Mexico for three months. Kearny’s troops entered the city the previous day without incident. Wishing to leave a force in Santa Fe that would maintain U.S. control while he led part of his army on to California, Kearny’s men quickly located the site for a fort. Named after Secretary of War William L. Marcy, the fort dominated the Santa Fe skyline until its closure in 1891. 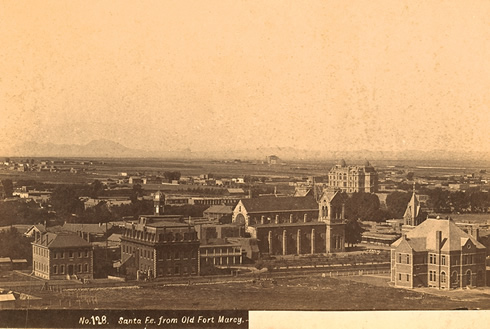 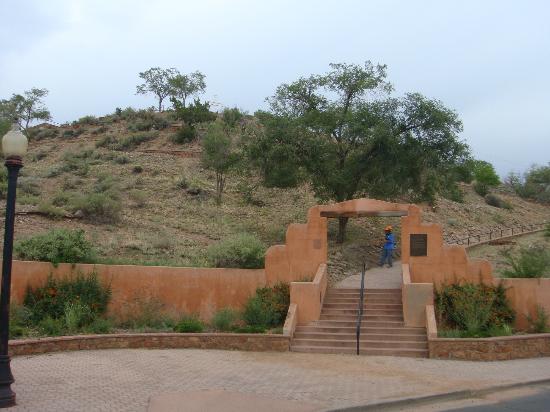 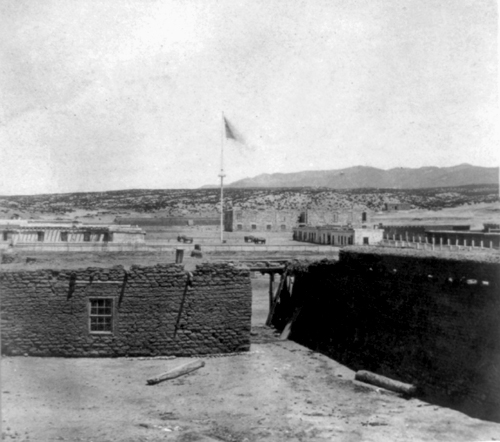 The United States declared war on Mexico on May 13, 1846. In June, Brigadier General Kearny left Fort Leavenworth, Kansas with orders to take New Mexico on his way to California.1 On August 18, Kearny and his men entered Santa Fe without incident. Mexican Governor, Manuel Armijo, had abandoned the city. On August 19, Kearny assigned engineers Lt. Jeremy F. Gilmer and Lt. William H. Emory the task of selecting the location for a fort that could command Santa Fe.2 Gilmore and Emory quickly selected a hill near the city center as the fort's location.
The hill upon which Fort Marcy was constructed was the location where natives launched attacks against the city. On August 22 a plan for the fort’s design was approved. Construction soon began under the direction of Lieutenant Gilmore and L.A. McLean. While approximately 100 of Kearny’s men provided much of the labor, 20 local masons were also engaged in the project. Construction of the irregularly shaped fort was completed by the end of September 1846.3

Located just north of the City Center and standing approximately 200 feet above it, Fort Marcy commanded a remarkable view of Santa Fe and the surrounding territory. In his 1912 book, Prince L. Bradford describes the panoramic view as being “unparalleled in beauty.”4  Fort Marcy was large, building walls measured five feet thick and nine feet in height. The fort featured an adobe block house and an eight-foot moat. Construction revealed native occupation of the site. Being of earthen construction the forts walls began to erode quickly. Eventually, the fort was incorporated into a 17-acre site reserved for military use.5 Fort Marcy remained an active military post until 1891. On October 24, 1891, the site was handed to the U.S. Land Office to be placed on public sale.6

In the early 1900s, the abandoned buildings of Fort Marcy became a problem for the city of Santa Fe. Efforts were made toward reestablishing a military presence at the facility. Some local residents were using the buildings for commercial or residential purposes without paying rent or taxes.7 These efforts were unsuccessful. In 1939, the Fort Marcy property was advanced as a potential site for a new state capitol building.8 This effort was also unsuccessful. Most of the fort’s structures are barely visible today. The site, however, still offers the excellent panoramic view for which the site is so well known.