Constructed in 1907 for a congregation that dates back to the end of the Civil War, the First African Baptist Church was the one of the leading centers of civil rights activity during the 1960s. The congregation began when African American members of Tuscaloosa's First Baptist Church decided to separate themselves from the white leadership of the church in the aftermath of the Civil War.

This historical marker stands outside of the church. 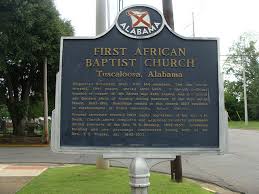 The structure was designed and built by members of the congregation in 1907. 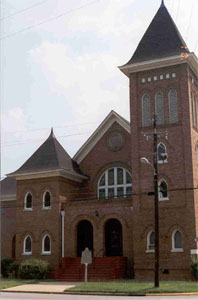 Reverend T. Y. Rogers took leadership of the congregation in 1963, with Martin Luther King Jr. delivering the sermon at Roger's installation as the church's new leader. In the next few years, Rogers led the congregation and community through several campaigns that challenged segregation and white supremacy. On June 9, 1964, members of the city's Black community held a mass meeting at the church and prepared to march to the courthouse which officials had finally agreed to integrate. Rather than allow the marchers to test the new policy of racial integration at government facilities, a white mob attacked the marchers, using baseball bats, cattle prods, and other weapons to beat the participants. The police soon joined the mob, attacking and arresting marchers in an event known as "Bloody Tuesday."