Known colloquially as the Soledad Mission or Mission Soledad, California’s thirteenth Spanish mission located near the present-day town of Soledad, California. It was is named for Mary, Our Lady of Solitude. Built halfway between Mission San Borromeo in Carmel and Mission Antonio de Padua in present-day Jolon, Mission Soledad irrigated the otherwise desolate valley around with water drawn miles away from the Salinas River. Never one of California’s most prosperous missions, it fell victim to extreme neglect for more than a century after the Mexican Secularization Laws took effect in 1834. The chapel and part of the mission were restored through heroic effort in the 1950s and 1960s. With further funding, it is hoped that more of the original mission can be rebuilt.

Original Mission Soledad Bell located outside by entrance in 2003. Since then it has been moved inside museum for safety and replaced with a smaller bell. 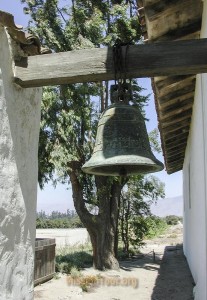 Mission Soledad as it looked in an 1850 sketch. 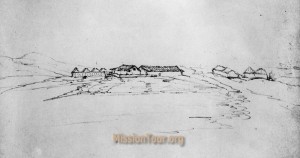 The original mission church has been restored, along with the old padres' quarters. 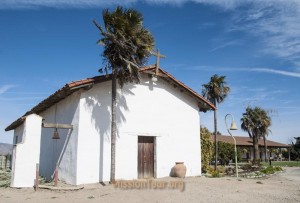 Map of phasing plan for restoration of Mission Soledad, currently displayed on the museum wall. With further funds, more of the mission can be rebuilt. 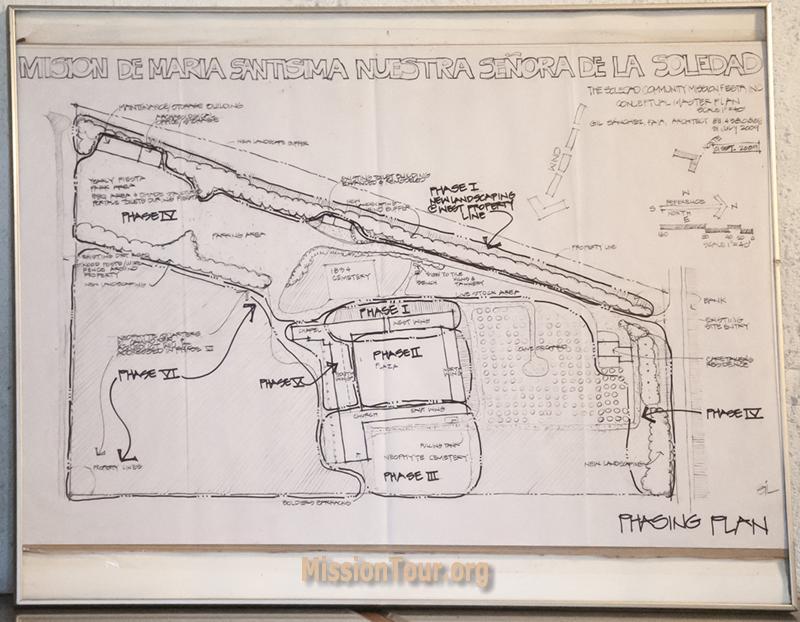 The original mission ruin as it appears today 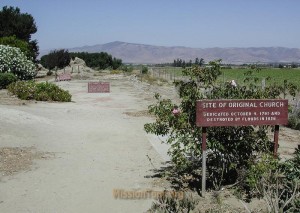 Grave of Father Ibanez, Soledad's longest-serving Franciscan padre. The mission's first decade was marred by friars who were condemned as lazy and inefficient by Presidente Fr. Lasuen, who removed them from Alta California and had them replaced. 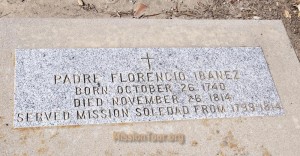 Aerial shot of ruins with overlay of mission structures. More funds are needed to rebuild the classic mission quadrangle. 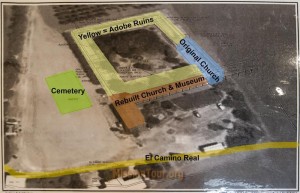 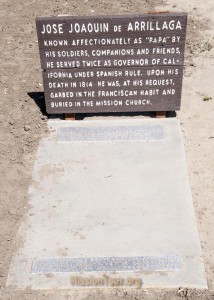 Henry Miller's sketch of Soledad in 1856. His description of the mission's decrepitude aptly summarizes it's condition for much of the next century, before it was restored with funds from the Native Daughters of the Golden West in thr 1950s. 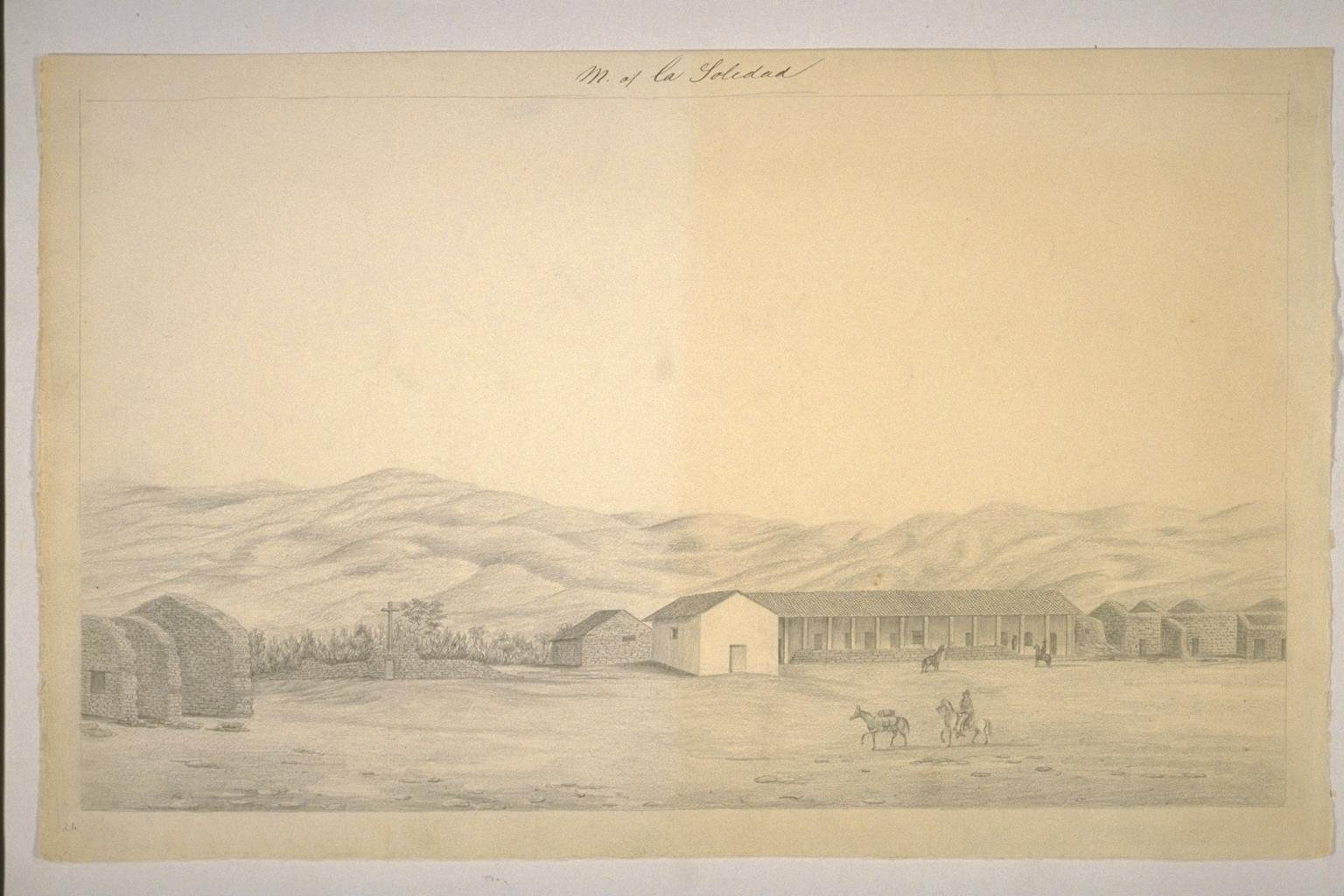 Ruins of the church in 1898. Without care and upkeep, adobe walls crumble quickly when exposed to the ravages of time and weather. 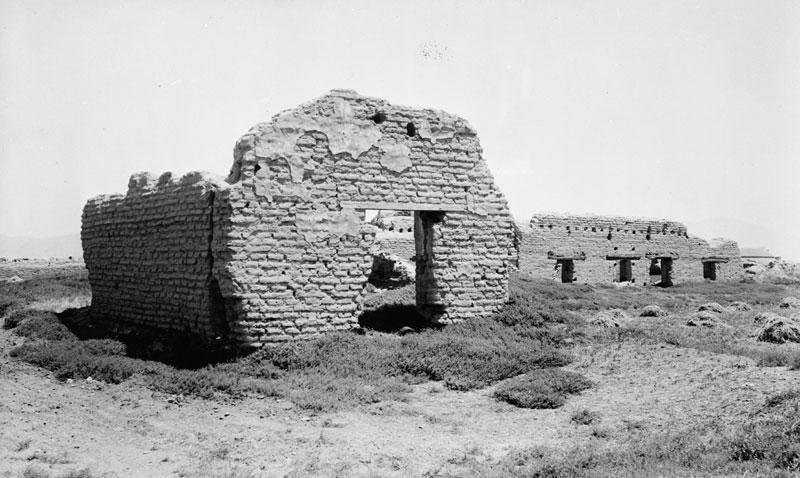 Edward Vischer's depiction of the mission in 1873. The white chapel at the center was the only building consistently maintenanced after ownership passed out of Franciscan hands in thr 1830s. 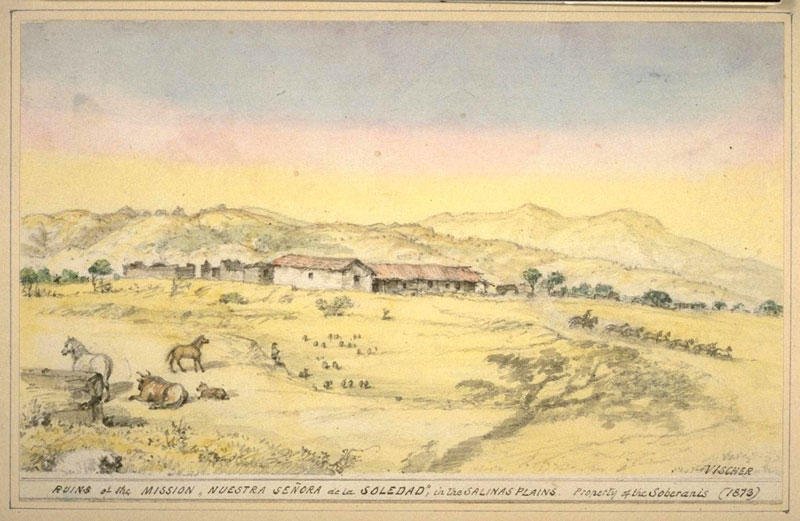 Harry Downie working at the Carmel Mission in 1939. He was instrumental in restoring a number of missions, but is particularly reverenced for his work at Carmel. Soledad Mission would be one of his last. 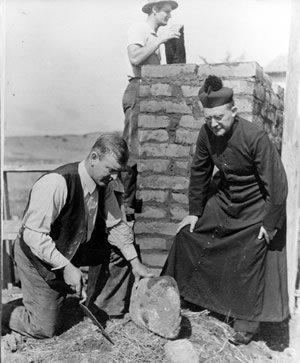 During 1769, on their march north to find Monterey, Captain Gaspár de Portolá and Padre Juan Crespí followed the Salinas River. They camped by the river in a brown and desolate valley. Curious Indians were asked about the area and the only word Padre Crespí thought he understood was soledad, Spanish for loneliness. Father Junipero Serra passed through the area in 1771 after founding Mission San Antonio de Padua. When he asked an Indian her name he also heard soledad.

On the October 9, 1791, Serra’s successor Father Fermin Francisco de Lasuén designated the site for California’s 13th mission, intended to bridge the 78-mile gap between the second Franciscan mission at Carmel and Mission San Antonio de Padua to the south, which had been founded third in the chain of missions. By placing the new Mission Nuestra Señora de Soledad (Our Lady of Solitude) in this otherwise remote place, travelers in the area would never be more than a day’s journey from a mission.

The valley floor was a dry, windy plain that experienced intense heat during the summers, yet grew equally cold during the winter seasons. Building was slow, requiring a year just to erect a temporary church. The first large permanent church came along six years later, in 1797. Soledad became the thirteenth mission out of twenty-one eventually established by the Spanish in California.

With an irrigation system built to convey water from the Salinas River via five miles of aqueduct built between 1796 and 1805, the Mission gradually transformed the valley into a place prosperous for agriculture. Despite this development, the extreme weather took its toll on a long succession of the Mission’s padre--over time roughly 30 were assigned to Soledad, an unusually high number among the California establishments. In 1803, Padre Florencio Ibañez began his tenure at the Mission. His 15-year stay was the longest of any Franciscans assigned to Soledad.

The main church was enlarged in 1805, but Soledad never attained the populations and productivity achieved by most of the of the other missions: that same year, the population of neophytes (converted Native Americans) peaked at 688. By contrast, the populations of most missions built steadily for much longer, many peaking at over 1,000 neophytes between 1810 and 1820. Soledad did, however, enjoy a unique diversity of tribes: the Chalon, Ohlone, Yokut and Esselen Indian tribes all had members at the mission. Nor was the Mission idle after this peak period. Later friars were more able administrators and the aqueduct was extended to a full fifteen miles in 1816, along with other improvements--though no new buildings were constructed between 1810 and 1832--a rare long period of inactivity among the missions.

During a tour of the missions in 1814 the first Spanish Governor of Alta California (Upper California), José Joaquín de Arrillaga, visited his friend Padre Florencio Ibañez, then assigned to Soledad. Arrillaga fell ill while staying at the Mission, however, and died in the Franciscans’ care. He was buried under the church floor, clothed in a Franciscan monk’s habit at his own request. His gravesite is marked at the mission. In 1818, Ibañez also died and was similarly buried under the church--the only padre to serve at Soledad who is buried at the mission. That same year, Argentinian pirates under the command of Hyppolyte Bouchard landed and seized nearby Monterey. The Spanish soldiers of the Monterey Presidio sent their families southward to safety at Soledad Mission. Bouchard soon left to raid southern California.

The years 1824, 1828 and 1832 brought devastating floods from the nearby Salinas River. Each time, the mission was reconstructed, but a sharp decline soon followed the final flood of 1832. The mission population fell away and two years later the Mexican government, hostile to the old Spanish rule represented by the mission system, initiated Secularization Laws and stripped the missions of their properties. The church was slowly abandoned. During Mass in 1835 Father Vicente Francisco de Sarría, the last Franciscan Father to lead the mission, fell at the altar and died the following day. The remaining neophytes built a litter and carried his body south to Mission San Antonio de Padua for burial.

Soledad rapidly fell to ruin. In the 1840s the final Mexican Governor of California, Pio Pico, suspecting it was only a matter of time before the United States seized the region during the Mexican War of 1846-48, sought to profit as much as possible by selling the confiscated missions and their land. With Soledad in a ruinous state, he was only able to eke $800 from selling what remained to Feliciano Soberanes. To his credit Soberanes did his best in 1850 to restore a chapel built in 1832--the last structure built by the Franciscans. Roof tiles were stripped from a number of the other structures and sold, leaving the interiors open to the elements and hastening Soledad’s decay.

In May of 1862, President Lincoln signed a decree that formally returned mission lands to the Catholic Church. At other missions, Catholic priests gradually returned and began rebuilding the parishes as best they were able. At Soledad, however, little but the front facade remained at the site and it was not reoccupied. It remained thus for nearly a hundred more years.

Finally in 1954, the Native Daughters of the Golden West began the restoration of Mission Nuestra Señora de la Soledad. First to be restored was the white chapel, rededicated October 9, 1955, on the Mission’s anniversary day. The padres’ residence wing was restored in 1963. Original building methods and materials were used to reconstruct these portions from data compiled by Harry Downie, who was a key figure in the restoration of several missions. Restoring the present buildings required the casting of 33,000 adobe bricks. The original floor of the church was located in the 1960s, along with the graves of Governor Arrillaga and Padre Ibañez.

Plans to restore the entire quadrangle have been made; its outline can still be seen in the adobe mounds. Lack of funds have put the plans on hold for now. The phases of this plan are displayed on the Museum wall. The Mission’s chapel, which is an active parish, is open to the public, along with a museum, grounds, and gardens. The Mission was entered in the National Register of Historic Places in 2014.