Mason Temple Church of God in Christ is one of the first African American churches in the Memphis area. The church provided a place for many African Americans to worship, as well as a meeting place for Civil Rights leaders and members of the black community. National civil rights leaders such as Martin Luther King Jr. addressed community members at this historic church, one of many ways that the church was an important part of the Civil Rights Movement. The church is listed on the National Register of Historic Places.

On April 3, 1968, Martin Luther King gave one of his most famous (and the very last) speeches, which is known as the "Mountain Top". Tragically, he was assassinated the next day.

An inside view of the church 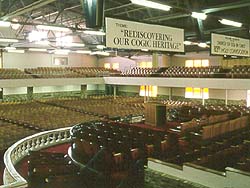 Mason Temple Church of God in Christ was established in 1938 and named in honor of its founder, Bishop Charles Harrison Mason. Mason was a missionary in Arkansas before traveling to other cities and eventually settling in Memphis. Before the church was built, members gathered together for services in the living room of one of their missionaries, Mother Mary Maynor. At this time, there were only twenty-five members of the congregation. Members of the congregation saved money and worked to construct the church between 1940 and 1945.

The first full-time pastor of the church was Elder E.N. Brockington, who worked to better the church as a whole. These improvements included helping to make changes within the church building. He resigned in 1978 in order to begin establishing another church in the area. After having several intern pastors, Elder James L. Lee became pastor in 1982. Under his leadership, the building was expanded. The new church opened on December 18, 1982.

During the Civil Rights movement of the 1950s and 1960s, Mason Temple Church of God was a meeting place for many African American leaders such as Dr. Martin Luther King Jr. On April 3, 1968, one night before his assassination, he gave one of his most famous speeches that is often referred to as the "Mountain Top" due to his stirring use of this familiar theme in Christian theology.

King was in Memphis that day to support a strike that involved approximately 1,300 sanitation workers, many of whom were also members of Mason Temple Church of God. These black workers faced discrimination, low pay, and unsatisfactory working conditions. City officials and law enforcement cracked down on the striking workers in ways that led national union leaders and civil rights activists to come to the city.