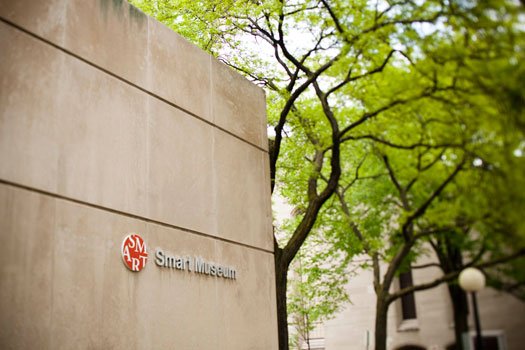 The Smart Museum of Art was dedicated and opened in October of 1974.  Originally run by the university’s art department, the museum gained its own administrative authority in 1983 with a focus on public outreach.  The museum underwent an extensive program expansion in the 1990s, reaching out to local schools and University of Chicago faculty.  After celebrating its 40th anniversary, he museum is currently undergoing gallery reinstallation.

Named for David (1892–1952) and Alfred (1894–1951) Smart, who launched  Esquire during the heart of the Great Depression and then followed that endeavour with Coronet, a pocket-sized magazine with the slogan “infinite riches in a little room,” and Verve, an oversize avant-garde quarterly that featured original art by Matisse, Chagall, and Picasso. In the postwar years, they also produced short instructional movies through Coronet Films. The success of Esquire offered the Smarts an opportunity to establish the Smart Family Foundation in 1967, which resulted in a gift to the University of Chicago -- the museum was born.1

“Through its holdings and its programs [the Smart] will offer countless and infinitely varied possibilities for the study of the visual arts. The discovery and the exploration of those possibilities, very much in the great tradition of experimentation and creative research which so characterizes the University of Chicago, is the task of the faculty, staff, and students now and in the future.”—Edward A. Maser, founding director of the Smart, 1974.2

Associated with the University of Chicago, the museum focuses on education of art in addition to (hopefully) being a world class displayer of art. By 1983, the museum expanded its philosophy to included greater public outreach by launching educational programs for local public schools as well as local art-focused programs.3

Further expansion commenced in 1999 when Smart received a $5 million bequest from Paul and Miriam Kirkley to establish an endowment for art acquisitions. During the 2000s, the museum hosted exhibitions that included Between Past and Future: New Photography and Video from China (2004), Echoes of the Past: The Buddhist Cave Temples of Xiangtangshan (2010), and Feast: Radical Hospitality in Contemporary Art (2012) toured nationally and internationally.4

Now home to 15,000 pieces, visitors can view anything from fine art brought to Chicago from around the globe to historical, ancient Chinese relics.