The story of Topeka begins with transportation. Cyrus K. Holliday wanted to build a railroad because he saw an opportunity for greater fortune and the development of the nation. He secured the funds to begin the endeavor and chose a site on the banks of the Kansas River. The Great Overland Station fulfilled his vision when it opened as a Union Pacific Railroad passenger station in 1927. After a fire damaged the station in 1992, Railroad Heritage, Inc (RHI) agreed to renovate and rehabilitate the museum. Renovation took place between 2000 and 2002, and the station is now a public museum and tourist destination. RHI is a not-for-profit corporation whose mission is to preserve the rich railroad heritage and other significant history of Topeka and northeast Kansas. Of particular interest to lovers of food and history is the Harvey House experience, offered by RHI as both an educational service and a fundraiser. Historical Harvey House luncheons can be scheduled for groups of 25 or more Tuesday through Friday between 11:00 a.m. – 2:30 p.m.

The Great Overland Station opened as a Union Pacific railroad passenger station in 1927. 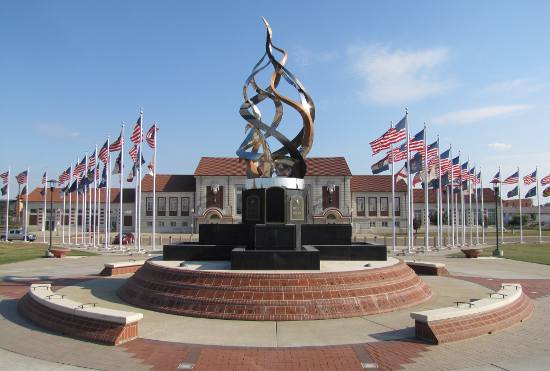 Historical Harvey House luncheons can be scheduled for groups of 25 or more Tuesday through Friday between 11:00 a.m. – 2:30 p.m. 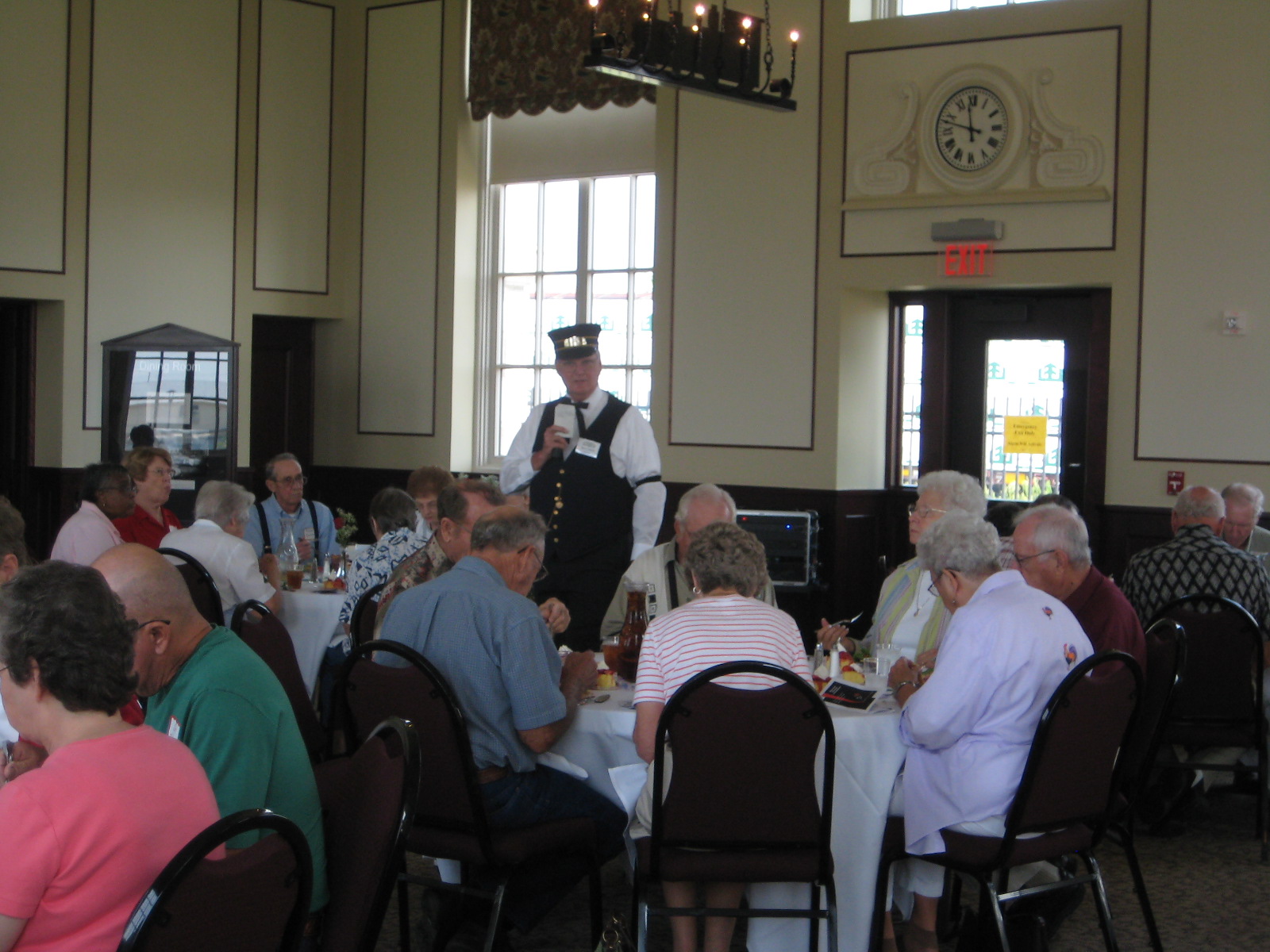 Main Waiting Room at the Station 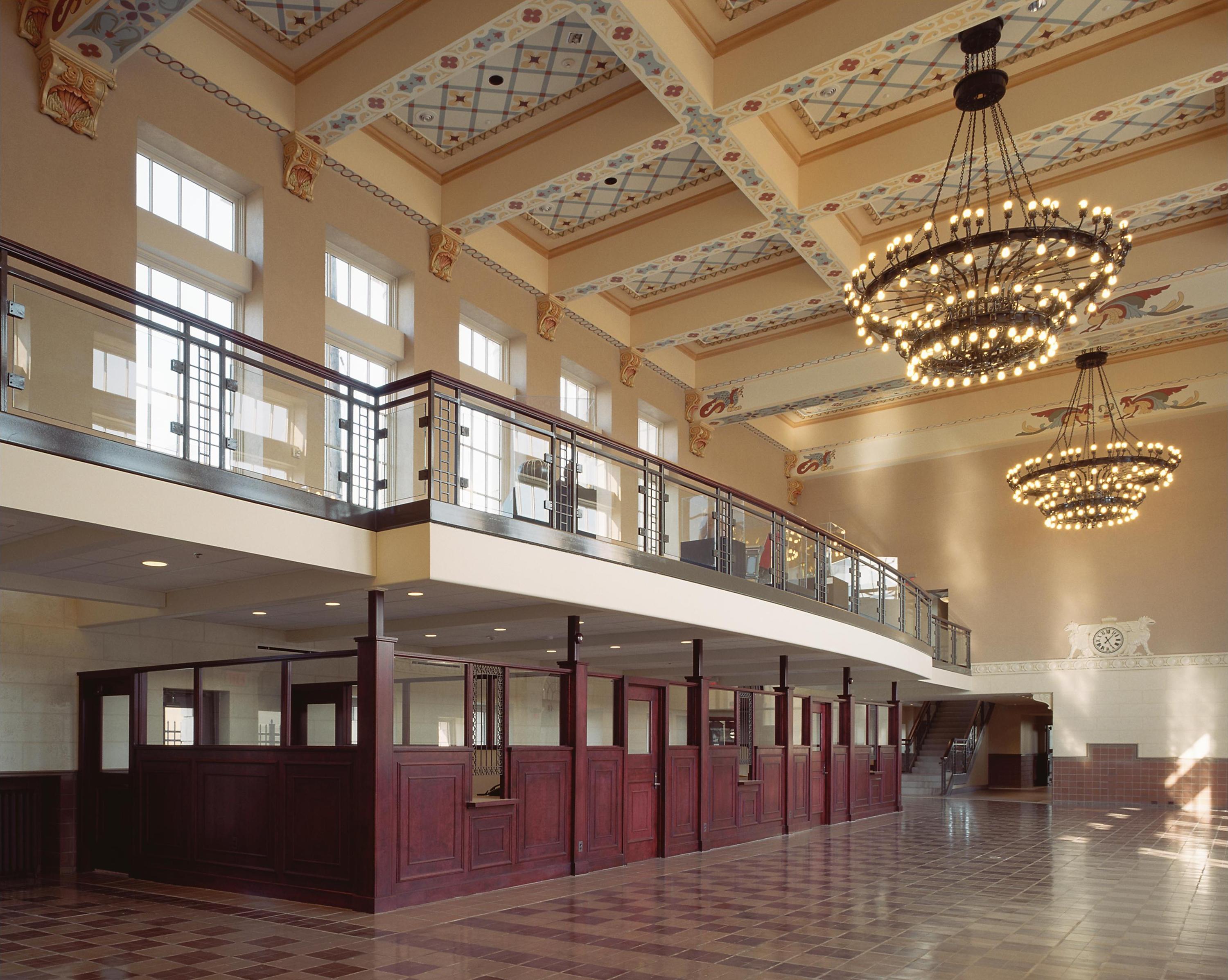 History of the Great Overland Station

Since 1850, when Millard Fillmore signed the railroad land-grant act, transportation via rail served as one of the most important economic and social factors in the development of the west throughout the 19th and early 20th centuries. Opened on January 27th, 1927 and designed by renowned architect Gilbert Stanley Underwood, the Great Overland Station expanded upon this essential role by accommodating the Atchison, Topeka & Santa Fe Railway, the Chicago, Rock Island & Pacific Railroad, and the Missouri Pacific Railroad.

From the Great Overland Station, which was considered to be “one of the finest passenger stations on the line,” provided critical connections westward and to many small rural towns through Kansas.

The Great Overland Station also builds upon the rich history of its location at 701 N. Kansas Avenue. Around this site, the legendary Pappan brothers would ferry Oregon Trail travelers across the Kansas River (called the Kaw River). Years later, runaway slaves seeking freedom in the north crossed this site along the underground railroad. The site is also associated with Indian Chief Burnett, George Armstrong Custer, Buffalo Bill, and Wild Bill Hickok.

The Great Overland Station was an active passenger train until May 2nd, 1971, when the last passenger train left the station. Abandoned in 1988 and damaged by fire in 1992, the RHI organization sought to preserve this essential facet of Kansas history by leasing the property and preventing the building’s demolition.1

According to RHI’s Mission Statement, the history of the museum and its significance is as follows:

“The history of this area has national significance which will resonate with people from across the nation. There are exciting and important stories to be told: the birth and growth of the Santa Fe Railway; the Union Pacific’s race to create the first transcontinental railroad; the role of railroads in developing and settling the American West; the social heritage of African-Americans, Hispanics and European immigrants who worked for the railroads and built our communities; the troop trains of World Wars I and II; memories of the “glory days of steam” and the elegance of the railroad depots.  By interpreting these stories we will pass the experiences and memories from older to younger generations and study the values inherent in those experiences - leadership, perseverance, enterprise, vision, dedication, risk and dreams.  The archives of the Santa Fe at the Kansas Museum of History, the Union Pacific archives in nearby Omaha, and the actual stories from hundreds of Topeka railroad workers provide a rich source of materials for exhibits and education.”2

In addition to the Harvey House Luncheons, the current Great Overland Station receives continual praise for its contribution to culture and history in Topeka. Some popular exhibits featured at the museum have included the “Santa Fe Calendar Exhibit,” “Emerging from the Ashes,” and many others. The permanent exhibits explore the history of the station, the city of Topeka, and railroad culture. Some of these exhibits include “Display of Kansas trains dating back to 1932,” “Photographs Flood of 1951 and 1966 Tornado,” and “History of Topeka from 1800 to present,” among others.3

The elegant former Union Pacific Station, designed by renowned architect Gilbert Stanley Underwood, provides a beautiful setting with its soaring ceilings and intricate ornamentation.  Ever-changing exhibits are designed to bring stories to life with hands-on activities, docents and photographs.  Outside, visitors will encounter train engines, wagon trains, trails and water features amid the stirring sight of the flags of the 50 states. Trains rumbling past link past to present and enhance the learning experience.

Complementing the station as another key component of the entire project is the development of the area surrounding the Station from Kansas Avenue to Topeka Boulevard and reaching south to the Kansas River.  It is a site ripe for development, encompassing enough space to create a large community park and provide access to activities along the river.  As with the Station, the site connects past to present with significant stories: Pappan’s Ferry, an important Oregon Trail crossing beginning in the 1840’s; the Kaw Indian habitation; the French influence; the early frontier town that Buffalo Bill and George Armstrong Custer frequented; the underground railroad; and the birthplace of Charles Curtis, 31st Vice-President of the United States and grandson of Louis Pappan and great-grandson of White Plume, the Kaw Indian chief.

The third key component of this project is the development of the arts and entertainment district along historic North Kansas Avenue, where unique storefronts from the 1800’s survive.  As envisioned in the 1999 North Topeka Revitalization Plan (developed by the Topeka/Shawnee County Metropolitan Planning Department in cooperation with North Topeka on the Move Association “NOTOMA”), this district will have shops, restaurants, and entertainment venues.  With restored storefronts, new streetscapes, new and/or rehabilitated housing, and the riverfront developed for community recreation, this area will be a focal point to revitalize the core of our city, attracting young people as well as tourists.  Such major redevelopment will enhance economic development throughout the community and create new jobs.  The Great Overland Station is seen as the catalyst and major anchor of historic North Topeka’s redevelopment.

Together, the major components of Great Overland Station, riverfront park and historic arts and entertainment district will preserve our heritage, bring our community together, educate children and visitors, create new jobs, and attract tourists to visit and spend time in Topeka.2