Chicago Museum of Science and Industry

The largest science museum in the Western Hemisphere, the Chicago Museum of Science and Industry is home to 40,000 square feet of interactive exhibits and 35,000 artifacts. Based on 2009 attendance, the museum was the second largest cultural attraction in Chicago. One of the leading attractions at the museum, German submarine U-505 was produced for Germany's Kriegsmarine during World War II and was captured by the US Navy on June 1944. Visitors can tour this U-boat, which provided the Allies with a multitude of classified information. Among its diverse and expansive exhibits, the Museum features a full-size replica coal mine; a German submarine (U-505) captured during World War II, which is the only German U-boat in the United States; a 3,500-square-foot model railroad; Pioneer Zephyr, the first diesel-powered streamlined stainless-steel passenger train; the Apollo 8 spacecraft that carried the first humans to the Moon; Science Storm; You! The Experience; Baby Chick Hatchery; The Great Train Story; Toy Maker 3000; Genetics: Decoding Life; Earth Revealed; Colleen Moore's Fairy Castle; Farm Tech; and Tech Flight. The museum also features an 800 seat auditorium, 2 small theaters, and a 5-story, domed Omnimax Theater. The Museum of Science and Industry encourages and inspires children and other visitors to learn and strive in the fields of science, technology, medicine, and engineering. The museum's Center for Science Education offers teacher education courses and youth programs, featuring learning labs and after-school science clubs.

Museum of Science and Industry 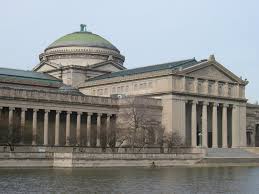 The Museum of Science and Industry is housed in the former Palace of Fine Arts from the 1893 World's Columbian Exposition; designed by Charles Atwood, the building is the only remaining one from this world exposition. Initially endowed by Julius Rosenwald, the Sears Roebuck and Company president and philanthropist, the museum was supported by the Commercial Club of Chicago and opened in 1933 during the Century of Progress Exposition.

German U-boat U-505 was a type IXC submarine which was larger than the conventional submarines produced by Germany weighing 1,200 tons. Production of this vessel began June 12, 1940, but it wasn’t until May 25, 1941, that the ship set sail. Over U-505’s lifespan, it conducted 12 patrols and sunk 8 allied vessels serving in the wolf pack Hela. June 4, 1944, U-505 was picked up on radar by an anti-submarine task force near Cape Verde. After close water combat, the submarine was damaged and abandoned but not destroyed. From the ship, 58 members were captured and the ship was salvaged for Allied use becoming USS U-505. Following the end of the war, the United States had no use for the ship and planned to use it for gunnery practice in the ocean. Instead, the ship was purchased by the Museum of Science and Industry in Chicago for use as an interactive educational exhibit.

Starting at the DuSable Museum of African American History, this trail moves north to include a variety of monuments, markers, museums, and other landmarks related to women's history. This trail is a work in progress; more entries will be added soon.