Traveling northwest from the Topeka city center along SW 4th Street or SW 6th street, drivers and tourists may stumble upon Potwin Place Historic District, a neighborhood that looks entirely different from the rest of the city. As opposed to blacktop or pavement, Potwin Place has red bricks forming the streets. Victorian, Italianate, and Queen Anne style houses are set back behind deep and expansive lawns. Roundabouts appear at nearly every intersection. Located between NW Grove Avenue and SW Willow Avenue as well as between SW Woodlawn Avenue and SW Greenwood Avenue, the Potwin Place Historic District stands out among any other district in Topeka for its architectural elegance and living history. From its 19th century designs to the overall character of the district, Potwin Place was listed on the National Register of Historic Places in 1980.

Potwin Place Centennial Quilt, made in 1988 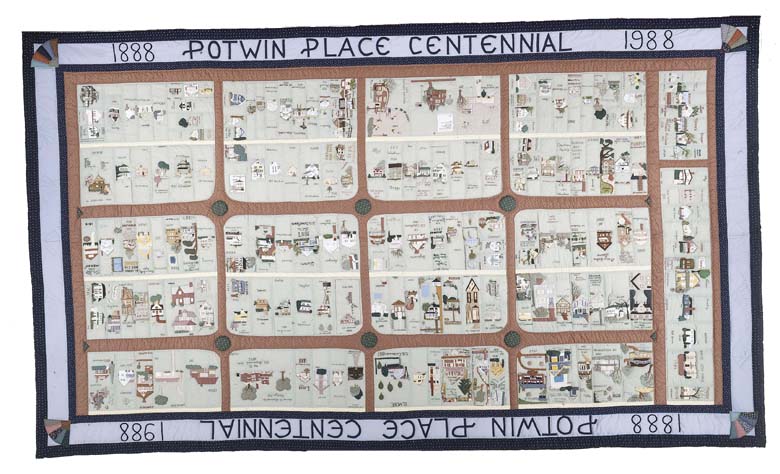 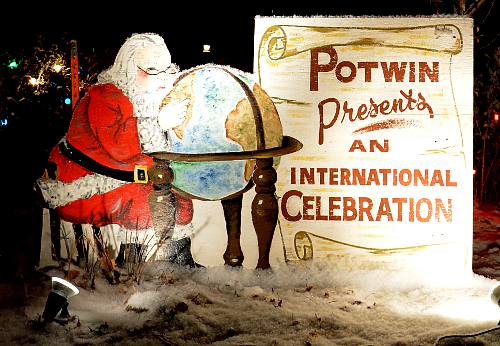 Example of a home on Greenwood Avenue 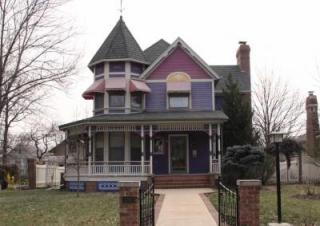 The Potwin Place Historic District dates back to 1869 when Charles Wolcott Potwin, a banker from Zanesville, Ohio, purchased around 70 acres of land from a half-blood Shawnee. The purchase was just one of many that Potwin acquired in Topeka at that time, but he didn’t plot the land for residential use until 1882.

Plotting the land, Potwin divided the 70 acres into 80 lots, each of which were about 122 1/2 feet wide and 205 feet deep. In addition to two, 100-foot-wide dirt thoroughfares running north and south and over 200 elms planted along the streets, Potwin included circular parks at the avenue intersections. By 1885, the lots were available for purchase, costing an average of $5,000 (the equivalent of nearly $122,000 today).

Therefore, early residents of Potwin were considerably wealthy. Potwin reportedly mandated that every house within the neighborhood would have to cost at least $2,000 to build (about $50,000 today). This required minimum reflected Potwin’s idea of an exclusive, prosperous development, but he soon realized that the newcomers to the district were spending considerably more than the minimum to build.

The first constructed house, out of the original six in 1885, was located on 337 Woodlawn. Most of the early residents were lawyers, businessmen, politicians, and other professionals who could afford substantial dwellings. By the end of 1888, only one house had cost the minimum $2,000, and on January 1st, 1889, the Topeka Capital newspaper reported that Potwin Place was “increasing rapidly both from immigration and natural causes, and wealth keeping pace with the new arrivals; bright, progressive, prosperous Potwin."

In 1888, Potwin was incorporated as the City of Potwin, though Topeka had already set forth a series of plans to incorporate large areas of suburban territory, including Potwin. Topeka residents had grown resentful since many of the Potwin citizens were making their money in Topeka without spending it there as well, and the incorporation issue became somewhat controversial.

In 1899, Topeka successfully incorporated Potwin, which was mostly due to the fact that Potwin lacked necessary public services, such as a fire department. Since then, however, Potwin continued to be a prosperous area of the city.

The National Park Service (NPS) accepted Potwin Place into the National Register of Historic Places in 1980 for several reasons. Although the district’s history illuminates the spread of suburban culture in Topeka, the architectural importance and distinctive identity of the neighborhood, unlike anything else in Topeka, classified the neighborhood as an essential characteristic of the city reflecting 19th and 20th century life.

Most of the residences in Potwin Place, many of which date back to the late 19th century and the early 20th century, stand as distinguished elements by virtue of design character. Red brick roads and the circular parks at the avenue intersections are some of the most easily visible historic elements.

Looking at the houses, however, visitors to the neighborhood can discover a variety of Victorian, Italianate, and Queen Anne style homes. Most homes feature fishscale shingles on the gables, turned posts and balusters, and windows with stained glass borders. Many of the 19th century homes with simple, late-Victorian style include predominately large front gable forms with extensions flanking or skirting them.

The early 20th century homes are typically two or two-and-a-half story structures with large front porches and palladian windows or columnnar supports of the porches. This architectural style reflects a taste for classicism, including colonial revival and beaux-arts.

What makes Potwin Place significant is not only the enthralling designs and home styles, but also the harmonious mix of 19th and 20th century architecture, continuous in taste as well as scale.1