George Albert Smith, 8th Prophet/President of The Church of Jesus Christ of Latter-day Saints, lived in this home for the majority of his adult life until his death in 1951. He is remembered for his service with Boy Scouts, Sons of the American Revolution, the tremendously successful welfare operations to send supplies to battle-torn Europe following WW2. He was also the first LDS President to give a talk at a General Conference for the church on television as well as being the first LDS President to travel to Mexico. He also appeared on the cover of TIME magazine. *Home is now a private residence

Apostle Ezra Taft Benson (and later 13th President of the LDS church) was assigned by George A. Smith to oversee the church's welfare efforts in Europe. Benson on the left and 2 counselors walk among debris in a European city. 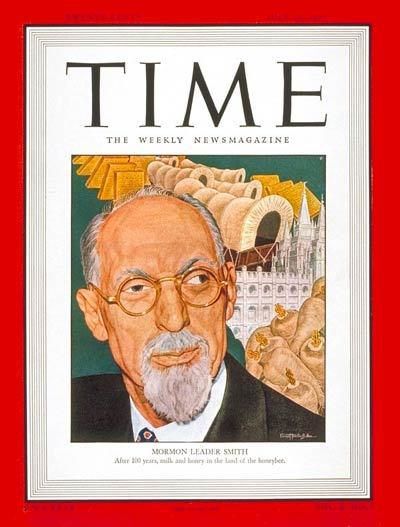 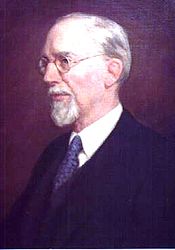 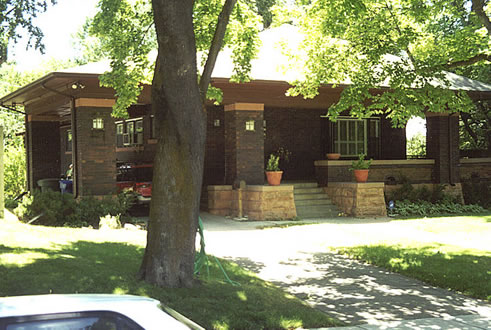 Born in Salt Lake City, Utah Territory, Smith was one of nineteen children of Mormon apostle John Henry Smith and one of his plural wives, Sarah Farr. His grandfather, for whom he was named, was also an LDS Church apostle as well as a cousin of church founder Joseph Smith. John Henry Smith and George Albert Smith are the only father and son pair to have been members of the Quorum of the Twelve at the same time, having served in the Quorum together between 1903 and 1910.

Smith attended high school at Brigham Young Academy, graduating in 1884. He next graduated from the University of Deseret (later the University of Utah) in 1888. In 1896, he had joined the Republican Party and campaigned for William McKinley, who became President of the United States. He also favored Theodore Roosevelt, McKinley's successor.

While surveying for a railroad as a young man, Smith's eyesight was permanently impaired by glare from the sun. After 1903, Smith found his frequent travels debilitating and began to show prominent symptoms of physical weakness. He was eventually diagnosed with lupus erythematosus, a chronic debilitating autoimmune disease.

Smith was known for his patriotism and joined various American patriotic groups. He was also an ardent supporter of the Boy Scouts. In 1934, the National Council of the Boy Scouts of America awarded him the prestigious Silver Buffalo Award. Smith was an avid genealogist and family historian and was named national vice president of the Sons of the American Revolution in 1922.

On May 25, 1892, Smith married Lucy Emily Woodruff, the granddaughter of Wilford Woodruff, in the Manti Temple. The couple later had three children. Lucy had spent much of her time growing up in the household of her grandfather, Wilford Woodruff, and looked on him as almost more of a father than a grandfather. Smith's son, George Albert Smith, Jr., became a professor at Harvard Business School.

Just prior to his marriage to Lucy, Smith served as a Mutual Improvement Association missionary throughout many areas in Southern Utah.

Smith and his new wife, Lucy, were missionaries in the LDS Church's Southern States Mission, with J. Golden Kimball as their president, from 1892 to 1894. Smith was appointed mission secretary.

Smith was called as a member of the Quorum of the Twelve Apostles in 1903. From 1920 until 1923 Smith served as president of the church's British and European missions. In this capacity, he preached in the United Kingdom, Ireland, France, the Netherlands, Switzerland, and Germany. From 1921 to 1935, Smith was the general superintendent of the church's Young Men's Mutual Improvement Association. In 1935 he was succeeded in this position by Albert E. Bowen.

With the death of quorum president Rudger Clawson in 1943, Smith was sustained as President of the Quorum of the Twelve Apostles and served in the position for two years.

With the death of Heber J. Grant, Smith became president of the church on May 21, 1945. When World War II ended, Smith helped send supplies to Europe and was also known for his efforts to revitalize missionary work. He publicly denounced the activities and political influence of the American Ku Klux Klan. Smith dedicated the Idaho Falls Temple on September 23, 1945. Over his lifetime, he traveled approximately a million miles fulfilling church assignments.

Smith was the first church president to visit Mexico while in office. He went there to complete the reconciliation of and return to the church a group of apostates in Mexico known as the "Third Conventionists".

For the LDS Church's centennial in 1947, George Albert Smith was honored on TIME magazines cover. Though the cover art features gold dollar signs on the beats and a myriad of Golden Plates (from which LDS members believe the Book of Mormon was translated from) in the background to showcase the church's financial health, the cover emphasizes on the church's pioneer history, Salt Lake Temple, the Book of Mormon and George Albert Smith.