The Arkansas Governor’s Mansion has been home to Arkansas’s governors since 1950. Designed by Cromwell Architects of Little Rock, this 3 story, Georgian-Colonial style home sits on 8.5 acres with a brick walkway that connects the main house to the East and West wings. The home is complete with a formal living room, a state dining room, a library, a grand foyer, an atrium, a lower atrium, and a grand hall. 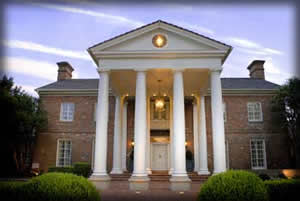 In 1944, the Arkansas Federation of Women’s Clubs began to campaign for funds for a permanent residence for the state’s governor.  Their first legislative attempt failed, but in 1947, their second was successful in getting a Governor’s Mansion Commission of $100,000.  Construction began in 1947 and officially opened on January 10, 1950 with a well long public open house.