The Arkansas Museum of Discovery was founded in 1927 and is the oldest museum in the state. The museum was created through the leadership of Julia Bernell Smade Babcock and originally designed to help visitors learn about Arkansas's history and the experiences and contributions of state residents. Today the museum serves as an interactive and engaging science center in downtown Little Rock that offers summer camp opportunities, educational school and public programs, Saturday workshops, Science After Dark for adults, Spark!, Tinkerfest, and Wiggle Worms.

Here is a image of the entrance to the Museum as it stands today.

This image provides a look inside the Museum of Discovery. 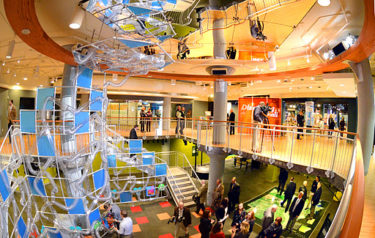 The museum originally opened as the Museum of Natural History and Antiques in 1927. Originally located on Main Street in Little Rock, Babcock gifted the museum to City Hall in 1929. The Arkansas Museum of Discovery was shut down in 1935 because the City Hall could not supply the room for its artifacts. It reopened in 1942 at MacArthur Park, where it remained for 55 years. The museum has changed names several times, as it became the Museum of Science and Natural History in 1964, and the Arkansas Museum of Science and History in 1983. When the museum reached its accreditation in 1993, it had amassed over 14,000 artifacts. During the 1970s the museum dedicated itself to creating more museum and outreach programs to better engage and educate the community.

The museum moved to its River Market location and changed its name to The Arkansas Museum of Discovery in 1998 and focused on providing interactive exhibits for youth that focused more on science and technology.The museum merged with the Children’s Museum of Arkansas and became a Smithsonian Affiliate in 2003. In 2011, the museum underwent extensive renovations and became a full-fledged science center.

The museum fills up two floors with dozens of galleries. The main three areas of the museum are the Discovery Hall, Earth Journeys, and Amazing You. Discovery Hall is dedicated to the various physical sciences; Earth Journeys explores natural sciences relative to the Arkansas landscapes; and the Amazing You area focuses on biology and health sciences. The Arkansas Museum of Discovery has made large strides since its founding and is continuing to grow today.

This walking tour takes users to a variety of Little Rock landmarks along the south bank of the Arkansas River. The tour includes museums and cultural sites such as the Bill Clinton Presidential Library.