Only ten weeks after the United States declared war on Germany, government officials announced their intention to create a National Guard Training Camp at Waco. Through the combined efforts of Waco businessmen and the federal government, the City of Waco set aside 10,700 acres of cotton fields and farmlands as well as $5 million to construct administration offices, a tent city, a hospital, and several other military buildings. Named after Medal of Honor recipient Lt. Gen. Arthur MacArthur, the Camp was built to hold more than 45,000 people. However, no more than 28,000 lived and trained at the Camp at any point in time. The first troops who arrived at Camp MacArthur in 1917 were mostly from Wisconsin and Michigan--members of the 32nd Infantry Division of the National Guard. With the tens of thousands of recruits arriving in Waco, the city experienced a significant economic boost. After the war, some servicemen who had been stationed at Camp MacArthur returned to Waco with their families. Although Camp MacArthur officially closed on March 7th, 1919, its memory and importance to the city of Waco lives on. Visitors to the city can find a historical marker at the original site at the corner of 19th and Park Lake. The marker is located near a parking lot for a grocery store.

Base Hospital at Camp MacArthur 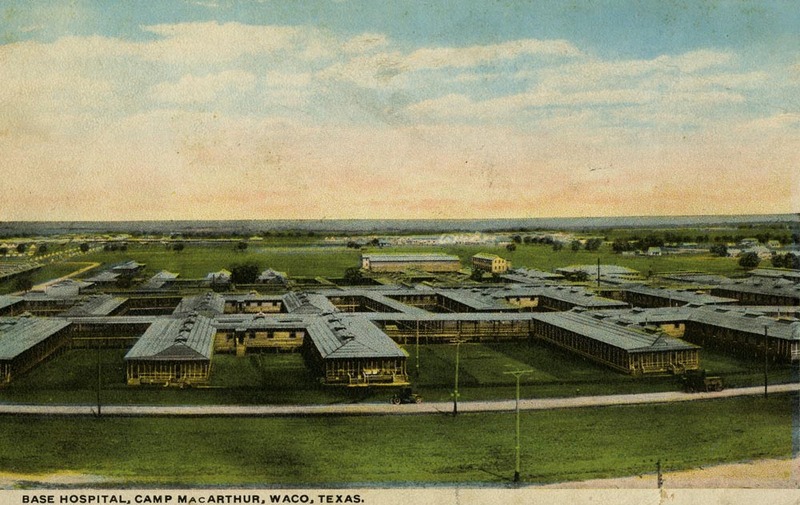 Staff of the 32nd Division 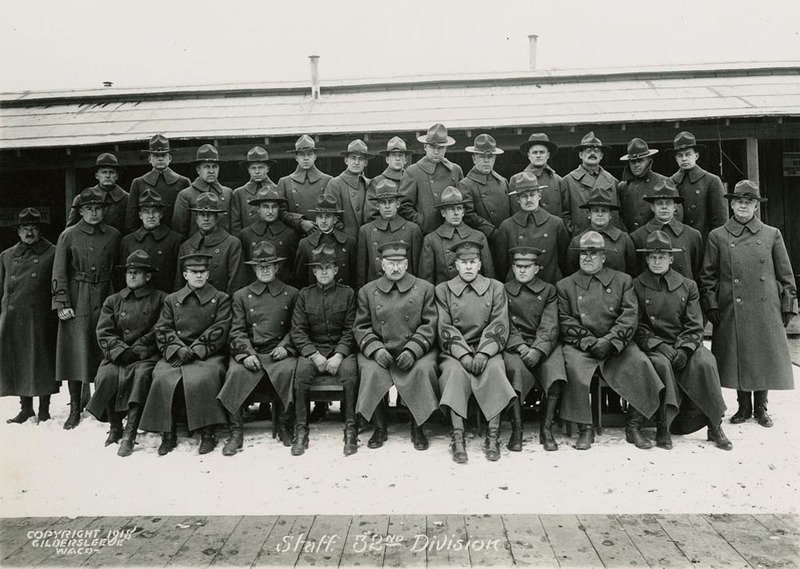 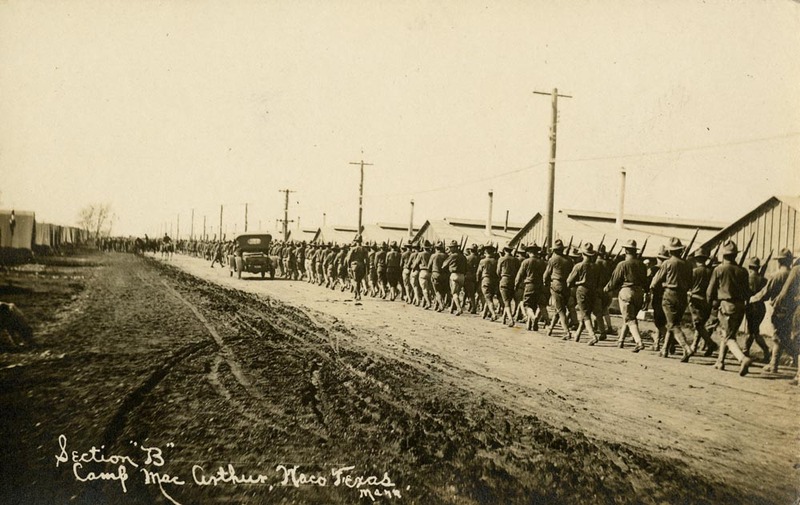 America's reluctant entry into WWI in 1917 was marked with by animosity toward Germany combined with national pride and worry over the horrors of the Western Front. At the same time, however, the war turned out to be economically beneficial for many cities across the United States.

History of the Camp

WWI was a complicated matter, and the US population was either strictly anti-Kaiser or, like many of the soldiers in Britain, France, and Germany in 1914, driven by nationalist fervor in the Great War environment. Three years after the war’s start in Europe, the US declared war against Germany. However, the US lacked military manpower to fight in the war, and the federal government mandated the construction of 16 National Guard training camps across the country.

In Waco, with the help of a $5 million grant and aid from local businessmen, Camp MacArthur began construction on July 10th, 1917. By September, with most of the administrative offices, the tent city, and other military buildings ready, trainees from Wisconsin and Michigan arrived.

Camp MacArthur served three essential functions: an infantry replacement and training camp, an officers’ training school, and later as a demobilization facility. The Guardsmen who first arrived in Waco as part of the 32nd U.S. Infantry Devision would eventually join the American Expeditionary Forces near Langres, France, on February 24, 1918.

The soldiers in the 32nd, also known as the “Red Arrow” division, distinguished themselves in France for their successful and tenacious attacks on enemy positions, and they garnered the name of “Les Terribles.” Many of the soldiers trained at Waco would eventually receive military decorations from foreign governments.

In addition to the trainees from Wisconsin and Michigan, recruits from Texas, Arkansas, Missouri, and New Mexico arrived in Waco. Following the war’s armistice on November 11th, 1918, the camp functioned as a demobilization facility, and it officially closed on March 7th, 1919. Materials from the camp’s infrastructure would later be used for the US-Mexican border as well as for Waco’s Edgefield neighborhood.

How the Camp Transformed Waco

The most significant effect that Camp MacArthur had on Waco was the economic prosperity the influx of soldiers brought to the modest town. At the time, the camp doubled Waco’s population and gave local businesses a large demographic for sales.

Furthermore, the town’s morale also skyrocketed. This could be seen with the Cotton Palace Exposition of 1917, which featured exhibits such as a bullet-ridden German biplane. This economic prosperity and morale remained after the war, and Waco was booming until the Great Depression devastated the town.

The presence of the camp and US Army’s insistence on decreasing distractions also played a major role in the closing of Waco’s red light district, known as “The Reservation.”1

Named for and dedicated by Lt. Gen Arthur MacArthur, U.S.A., veteran of Civil War, outstanding officer in Phillipines, 1898-1902, Father of Gen. Douglas MacArthur. Founded July 18, 1917, to train 32nd division, National Guard, in First World War. Capacity was 45,074--at time when Waco had a population of 32,000. First had troops from Michigan and Wisconsin; later, Arkansas, Missouri, New Mexico, Texas. The 32nd went to France in Feb. 1918. MacArthur became an infantry replacement and training camp and officers training school. Demobilized 11,000 in Dec. 1918.2