The La Concha Motel was once a Las Vegas motel modeled after “Googie” style architecture. Opened in 1961, the motel remained open for several decades until its closure in 2003. Though the Motel was threatened with the prospect of demolition, it now stands as the visitor’s center for the Neon Museum.

A view of La Concha. 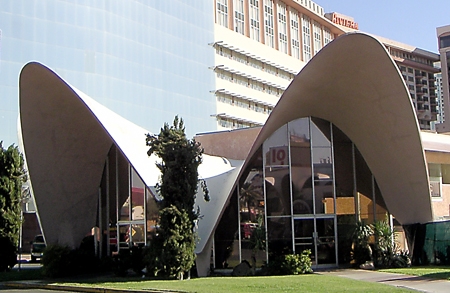 In the late 1950s, M. K. Doumani desired to build a hotel that would stand out in comparison to the many hotels and casinos scattered across the city of Las Vegas. In order to realize this ideal, Doumani called on the architect Paul Revere Williams, who was widely respected for his architectural work. Williams agreed to the proposal, and in 1961, he had a design for a stylish hotel which would stand out from the rest of the glitzy hotels on the Strip. The La Concha opened later that year, and though it was not nearly as large as other motels in the area, sporting only 100 rooms, it was immensely popular, and it was highly regarded for its architectural design.

Although the La Concha Motel was beloved by patrons for several decades, it ultimately could not keep up with its competitors. The Motel closed down in 2003, and it was announced that it was to be slated for demolition. Conservationists quickly came to the La Concha’s aid, however, and worked with the owners to find a new home for the Motel, rather than demolish it. In response to this, citizens, as well as the Historic Preservation Commission of the City of Las Vegas, the Preservation Association of Clark County, and the NV State Historic Preservation Office all collaborated to find a home, ultimately settling on the Neon Museum, who wanted the building to act as their visitor’s center. Due to difficulties moving the structure, it was cut into eight separate parts and transported to the Neon Museum, where it was reassembled.