This historic stone mansion was built in 1741 by influential Dutch merchant Cornelius Low. At the time, it was one of the largest and most expensive houses in New Jersey. While many of the nearby houses of the colonial era in this area featured stone foundations with wood framing, the use of stone has helped this historic home remain much as it did in the 18th century. Today, the mansion houses the Middlesex County Museum and offers free tours of the property which include a variety of artifacts as well as historic furnishings.

The Cornelius Low House was built in 1741 as the home of a wealthy merchant of Dutch ancestry, this two-story stone house is now the Middlesex County Museum 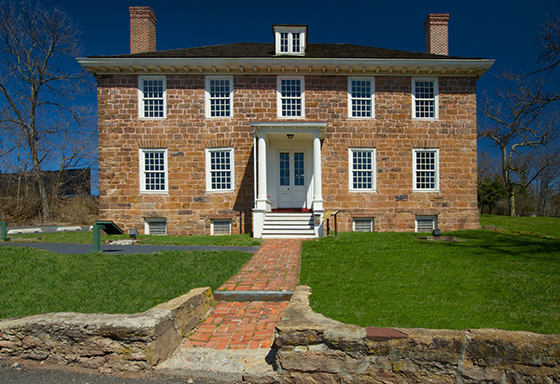 Cornelius Low, Jr. was the son of Dutch immigrant Peter Cornellessen Low, who arrived in the Dutch colony that would later become New York in 1659. He was also the third child in a total of fifteen children in his family. Low established himself as a merchant first in New York. In 1695, Low would marry a woman named Margareta Van Borsum and then moved on to become a very successful merchant in the town of Newark in the state of New Jersey in the 1720s. He was divorced from his first wife and then married another woman named Johanna Gouveneur in 1729. The couple had plans to move to a emerging port community known as Raritan Landing. With his shipping capabilities, Low became a successful businessman around that area.

A big flood happened in 1738 which resulted in Low and Johanna losing their first home since it was located along a wharf near Landing Lane. Low obtained new property which would become the house built in 1741 and he called it “the new house on the mountain.” This new house allowed Low to keep a close eye on the wharves and his warehouse. The British occupied this part of New Jersey during the American Revolution and destroyed some of the homes of colonial rebels. As a supporter of the King, however, Low's home was spared and Low would die in the year 1777. The house would be passed on to other generations and families.

Most of the families who have occupied the house were wealthy and could afford the necessary repairs the house needed to keep it going. Today, this house is one of two properties that is left over from Raritan Landing. The county of Middlesex brought the property in 1979 and renovated it to become a local heritage museum. Many years before it was bought by the county, it would be placed on the National Register of Historic Places on May 27, 1971. Prior to it becoming a museum, an archaeological dig performed by Hunter Research of Trenton dug up old items from the house like clay pipe pieces, glass pieces, old tiles, and a British military button.