Situated along the Minnesota River, the Traverse des Sioux State Historic Site marks one of the most important events in Minnesota's history. For thousands of years, the Dakota lived and worked at Traverse des Sioux, located on the lower Minnesota River. By the early 19th century, European American fur traders, missionaries, and adventurers were frequent visitors. Then in 1851, this site witnessed the signing of the Treaty of Traverse des Sioux between the US government and the Dakota that would lead to the US-Dakota War a decade later. Follow the paths used by generations of Dakota and early French fur traders as you learn about the deeply complex historical significance of the site. Take a self-guided tour along the 10,000-year-old Minnesota River Valley trails. Placards scattered along the trail share information about Dakota culture, the 1851 treaty, and its effects on people, transportation, the fur trade, and the town of Traverse des Sioux.

The river at Traverse des Sioux. 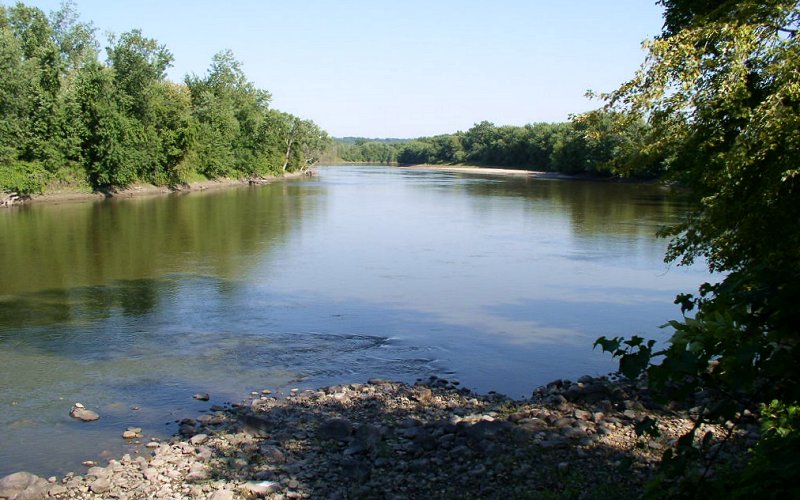 Map of the Minnesota River. The red line marks a trail that veers northward and crosses the river at Traverse des Sioux.

The word "traverse" is the French word for crossing and this was an appropriate name as the site was a fording point for Native Americans and fur traders. The river flows southeasterly to Mankato then head northwards, passing the park. Over time the site became a well established community of fur traders as well as those of interracial heritage—mixed bloods.

The government agreed to pay the tribes in large installments over time. After the treaty was signed, the tribes asked for a second copy and then received a third. However, the third was not a copy at all, but rather documents listing claims by traders and mixed bloods against the tribes; the documents also stated that these claims would be funded by the money the tribes would receive. The tribal leaders, not knowing English, were tricked into believing that the third "copy" was indeed that. This deception was one of the factors that led to the U.S.-Dakota War of 1862 that lasted from August to December of that year. Thirty-eight Sioux were hanged in the largest mass execution in U.S. history and the government terminated the Sioux's Minnesota reservations in 1863.