The site of the Rowland Theatre building was previously occupied by the Pierce Opera House. Owned by Philipsburg businessman J.H. Pierce and built sometime before 1889, this three-story building was destroyed by fire, along with several other downtown buildings, on December 30, 1910. In 1915 the Rowland family purchased the property and immediately began making plans for the construction of a building which could house live theatrical performances as well as conventions and public meetings. The theatre is currently owned by Philipsburg Borough and leased to Rowland Theatre, Inc. a 501(c)3 non-profit. It is located in the Philipsburg Historic District.

In this 1913 photo, Congressman Charles Rowland is the man on the right 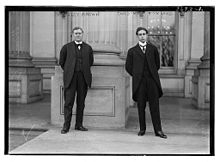 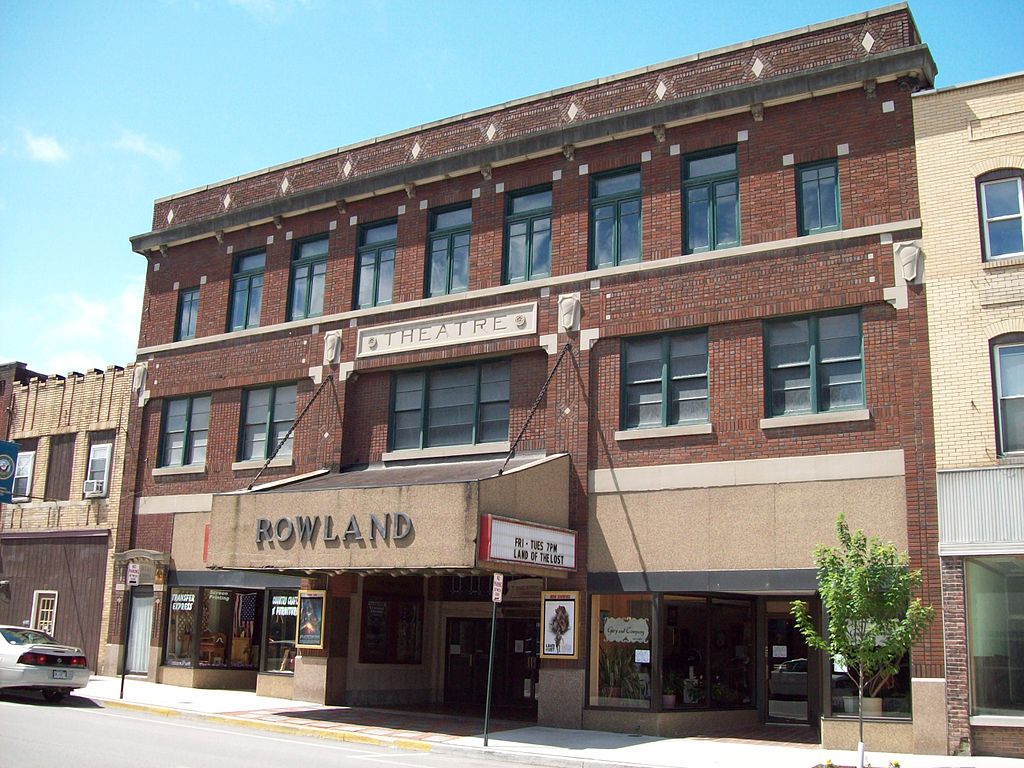 A band performs in front of the Rowland. Believed to have been taken during its opening in 1917. Other sources state that this photo was taken on the 1890s when the building was the Pierce Opera House before it was destroyed by fire in 1910. 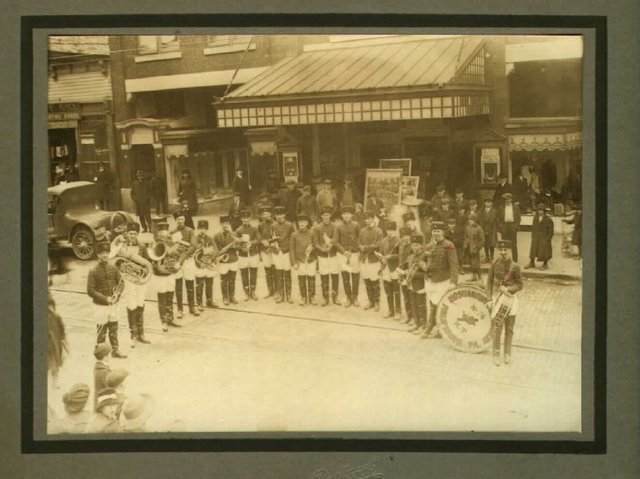 Auditorium and balcony, circa 1917 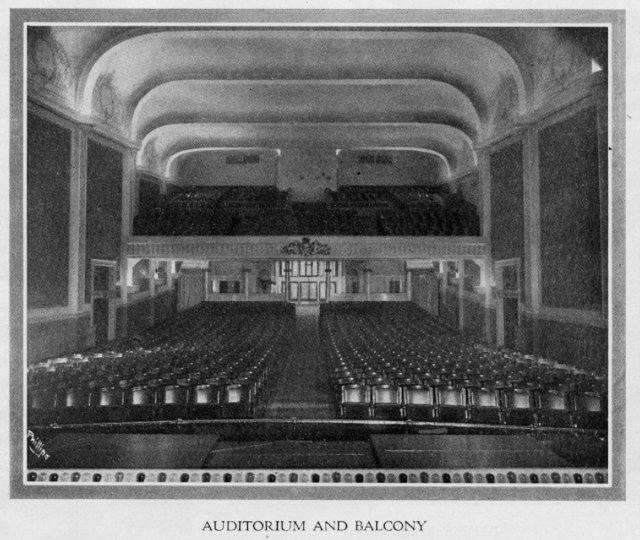 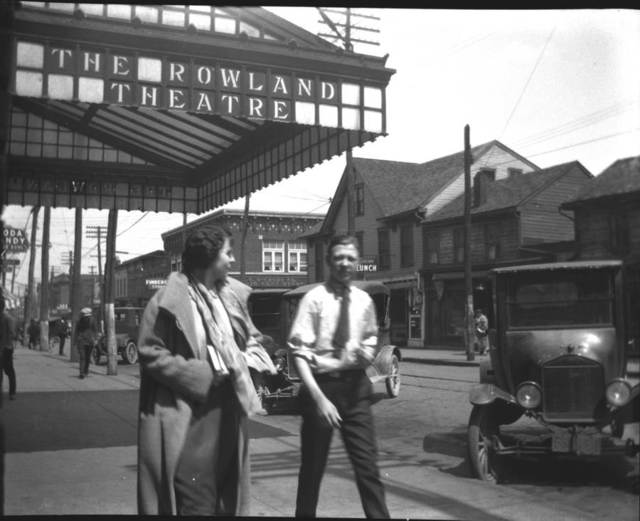 The Rowland shortly after opening in 1917 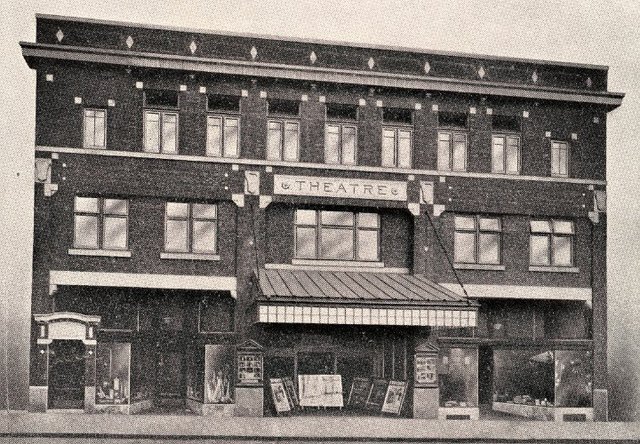 The theater is named for U.S. Congressman Charles Hedding Rowland (1860-1921). Rowland was one of several enterprising businessmen who engaged in coal mining operations in the Philipsburg area. He was president of both the Moshannon Coal Mining Company and the Pittsburgh and Susquehanna Railroad Companies during the late 19th century. He was later elected to Congress and served from 1915 to 1919.
Construction of the theater was carried out under the direction of architect Julian Millard and construction engineer W. A. Hoyt. Planning began in 1915, with construction starting in 1916, and completed in mid-1917. The building itself is a brick and ferro-concrete structure measuring sixty-six by two-hundred-twenty-two feet in plan. The first story of the front part of the building contains the theatre's entrance way, outer lobby, and two commercial stores. A suite of offices is found on the second floor and a meeting/rehearsal hall and miscellaneous rooms are on the third floor. The second and third floors are not currently used, as they do not comply with modern fire codes in providing adequate fire exits.

As a whole, the façade is a symmetrical composition with classically inspired detailing. Despite the volumetric effects of the projecting marquee, recessed theatre and shop entrances, and bracketed cornice, the image is predominantly two-dimensional. However, the use of decorative patterns in the brickwork, contrasting color and texture of materials, and architecture ornamentation contribute to a masterful composition. Horizontal emphasis is provided by simple, bold lintels about the store fronts, a belt course at the base of the third story windows, a projecting cornice, and caps which line the top of the parapet wall. Vertical emphasis is given by the effect of pilasters defining the three bays of the first and second stories. A rectangular concrete plaque inscribed with the word “THEATRE” and the marquee/theatre entrance defines a central axis.

The lobby of the Rowland theater houses the current box office and concessions, as well as the original box office, now used for minor storage. It features plate marble on the lower half of the walls, and murals depicting both American Indian and local historical scenes on the upper halves. Lighting is provided by two large hanging fixtures.

The foyer is large, expansive, and lavishly decorated. It features a stained glass skylight, crimson red carpet, marble plate lower walls and ornate cloth hangings on the upper walls. Two staircases, one on each side wall, lead upstairs, converging at the entrances of the main office and board room, and ending in a ramp up to the balcony. The restrooms are also located here, as well as storage for some concession supplies.

The main hall of the Rowland theater houses the majority of seating available. Approximately 1000 seats, as well as handicap-accessible areas, adorn the main floor up to the edge of the orchestra pit. The ceiling is vaulted where it meets with the steel support structure (a successful attempt to blend form and function, adding to the appealing look of the building), and once contained various ornate murals, which have since been mostly covered by white paint during restoration. Some original parts of the mural, as well as examples of restoration efforts conducted in 1930, have been left exposed.

The frame of the stage is ornately decorated, and once featured similar murals to the ceiling (some examples are left exposed here as well). Still visible are original, hand-carved wood accents over the doors leading up to the stage's side areas.

The stage in the theater is fifty feet in width, thirty-four feet deep, and has approximately fifty feet of vertical space, with eleven dressing rooms in the basement below. The front curtains are motor-driven, and three additional layers of curtains run to the back wall of the stage, giving it multiple depth options for stage productions.

The screen is the largest movie screen in central Pennsylvania, measuring twenty-nine feet wide and fifteen feet tall. It can be converted to handle both Flat and Scope aspect films. It is suspended from the stage ceiling, and can be raised and lowered via a pulley system located offstage to allow for quick transition between motion picture and stage events.

The Rowland Theater uses a three-tier platter system coupled with a 35mm projector. The projector itself supports both Flat and Scope aspect films via interchangeable lenses. Sound is provided by a Dolby SR Processor. Speakers are located on stage behind the screen (center, left and right channels), in the Orchestra Pit (subwoofer), and along the sides of the theater walls (surround channels) on both the ground floor and balcony.

The Rowland Theater is currently owned by Philipsburg Borough and run by the non-profit Rowland Theater, Inc. Its governing body consists of a volunteer Board of Directors, and it employs approximately eight full-time employees. Concessions and other jobs are staffed by volunteers from the local community, and volunteer hours can be used as credit towards a variety of local programs which have community service requirements.

The theater can accommodate approximately 1150 people total, and approximately 950 during normal operation. This is due to the seats in the back portion of the balcony being originals, and therefore off-limits to the general public. They can be opened when needed, but this hasn't happened during modern operation.

The theater's stage can be used for a variety of events, including plays, choirs, and smaller orchestras. In front of the stage is an orchestra pit which can hold approximately 30 musicians and instruments. Minimal on-stage lighting and several spotlights, located throughout the theater's main hall, are available. A house sound system, separate from the system used for motion pictures, is also available.

The Rowland Theater is available to rent to the general public for many different types of events, including (but not limited to) private group movie screenings, weddings, live music events, auctions, cultural events, meetings, presentations and more.