The Wade House originally belonged to Sylvanus and Betsey Wade, the original permanent settlers of Greenbush. The Wade family operated the inn for close to a century before it was sold. After a grand restoration, the 1850s inn is a premier historic site open to the public. Also on site is the reconstructed Herrling sawmill, which is one of the only working water-powered mills in the nation today and the Wesley Jung Carriage Museum, which is home to Wisconsin's largest collection of hand-and horse-drawn carriages. 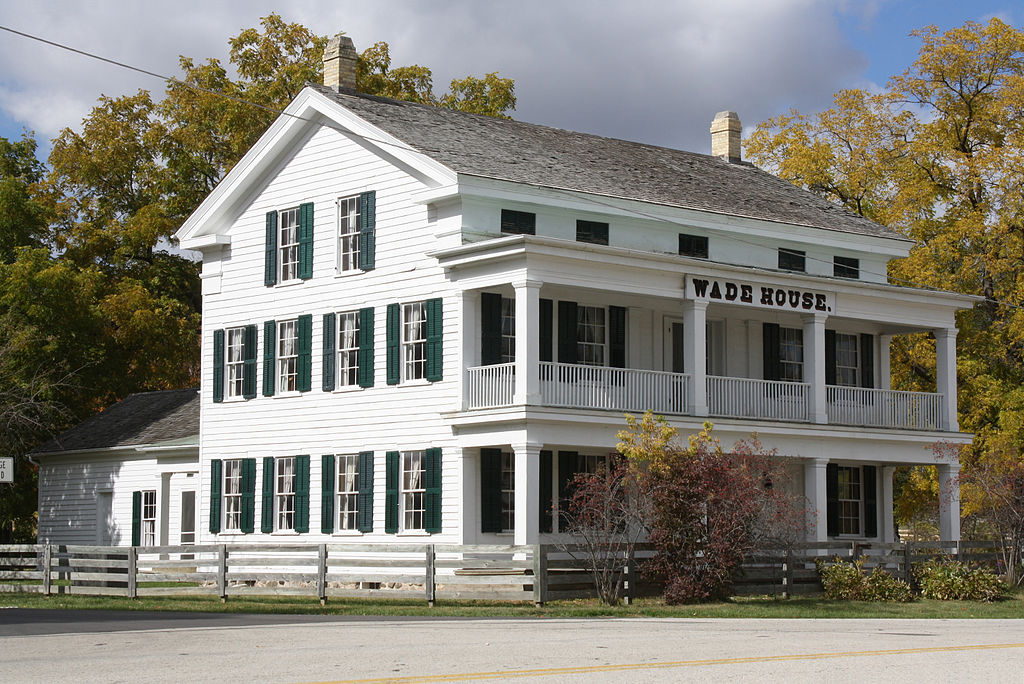 In 1844, Sylvanus and Betsey Wade settled the densely wooded region that would eventually become Greenbush. As the first permanent settlers, the Wades began to establish a village on this newly founded frontier. The couple chose a midpoint location between Sheboygan and Fond du Lac that featured the Mullet River, a quality water source that they planned to use for a mill. By the time Wisconsin became a state in 1848, the village of Greenbush already boasted of a school, sawmill, wagon shop, town blacksmith and a doctor.

The Wade's operated a tavern out of their home, which was a popular stop for those travelers passing through on the stagecoach road between Sheboygan and Fond du Lac. The business was very prosperous, and eventually, the Wades expanded the structure to accommodate patrons; in fact, they decided to opened an inn in 1850.

Designed in the Greek Revival style, the Wade House stagecoach hotel featured three-floors of luxury. The inn became a multi-purpose venue, hosting cotillions, meetings, political caucuses and circuit court sessions. After about a decade of prosperity, however,  the Wade's hotel was soon forgotten due to the implementation of the railroad: the transportation route completely bypassed Greenbush. However, despite suffering economic decline, the Wade's inn continued to operate until around 1910.

After three generations of Wades resided in and operated the building, William Wade, Sylvanus's grandson, sold the hotel in 1941. A friend of the Wade family Mary Dorst bought it with dreams of restoration. However, Dorst was eventually unable to fulfill her plans due the absence of adequate funds for completing the project. Fortunately, a couple of others also desired to see the Wade House returned to its original grandeur.

Sisters-in-law Marie Christine Kohler and Ruth DeYoung made plans to purchase the home and begin the process of restoring it to its 1850s appearance. Sadly, Marie died before the plans got underway, but Ruth would not abandoned the vision she shared with her late sister-in-law. In 1950, the Kohler family and the Kohler Family Foundation purchased the Wade House. The Kohlers additionally purchased the home of Charles Robinson, who was the son-in-law of Sylvanus Wade in order to also restore it to its 1855 appearance. According to the Wisconsin Historical Society's website for the Wade House, "the house's first floor was opened as a series of period rooms. A blacksmith shop, framed with early timbers, was also reconstructed near the original location of the Henry Dockstader smithy that once fronted on the Plank Road near the Wade House."

Ruth Kohler had much hands-on involvement in the restoration of the properties and planned for them to be deeded to the Wisconsin Historical Society when they were to be completed. Unfortunately, Ruth died three months before the grand opening of the historic site. The Wade House opened to the public on June 6, 1953. A decade later, it was voted that the carriage collection of Wesley W. Jung, who was the grandson of a carriage maker from Sheboygan, be housed at the Wade House site; the collection opened to the public in 1968.

In 1999, the Kohler Trust for Preservation announced that it would fund the re-construction of the Herrling Sawmill, an original Greenbush landmark, to the tune of $1.8 million. The mill opened to the public on June 16, 2001.