Saint Gertrude’s Roman Catholic Church was established as a mission by Saint Joseph’s in Toms River in 1908. he church was built in memory of Veronica Eagan who had taken her vows to join the Sisters of Notre Dame, she had taken the name Sister Gertrude after that saint. Soon after that she died and her family decided to sponsor the church in her memory. 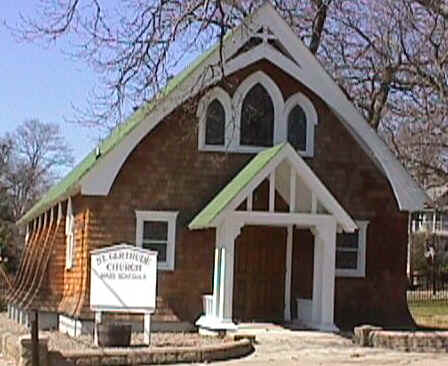 The Chapel of St. Gertrude’s of the Holy Ghost was built as a mission of St. Joseph Church, Toms River in 1908 in the Carpenter Gothic Revival style.  Buttresses were added at some point and rectangular windows were changed to arched windows.  The single arched window above the entrance was changed to a triple arched window, all in keeping with the original style.  In 1987 extensive repairs were made during restoration and stained glass windows that were used in the old St. Joseph’s that was built in 1904 and used until 1952 were incorporated into the church.  The Ocean County Historical Society presented St. Gertrude’s with their Annual Presentation Award in 1990.