This natural rock formation has been one of the top tourist attractions in the Blue Ridge Mountains for over a century. Even before the creation of roads during the Great Depression, nature lovers have flocked to the area to hike the Blue Ridge Mountains and witness this legendary rock formation with its unusual wind patterns. According to legend, the circular winds within the gorge once carried a star-crossed lover back into his lover's arms after he had despondently attempted jump from the top of the cliff. As more and more visitors came to tour the Blue Ridge Mountains and see this particular site during the late 19th century, several guest houses and hotels were built in the area. Hoping to capitalize on the popularity of this unique rock formation, the growing community officially became the town of Blowing Rock in 1889. Today, the tourist town has a population of 1500 year-round residents but usually hosts eight thousand part-time residents and guests during the summer months.

The Blowing Rock is known around the world for the legend of two star-crossed lovers. Visitors to the formation can enjoy an incredible view from the “Crown of the Blue Ridge” from a nearby observation tower. 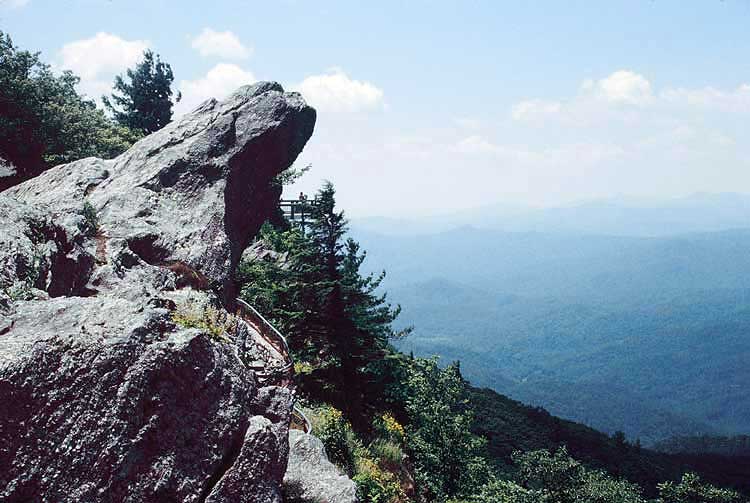 One of the largest tourist attractions in the Blue Ridge Mountains, the Blowing Rock was created by two opposing forces--the geological forces that slowly forced rock formations from the earth's crust to rise above the surface, and the equally slow process of erosion. This particular rock formation received its name because the walls of John's River Gorge form a flume through which the wind sweeps--creating both a "blowing" noise and a circling wind pattern that occasionally allows for a light object thrown over the chasm to return to the top of the gorge.
This phenomenon has spawned several legends, the most romantic of which involves two star-crossed lovers from rival Native American tribes. According to this legend, after being compelled to return to his own tribe and despairing that fate would forever prevent him from being with his true love, the despondent Native American man threw himself from the top of the chasm to certain death. But fate had another plan. According to the legend, his lover prayed for his return and the Great Spirit caused the winds within the gorge to blow so hard that the young man was safely returned to the top of the gorge and into the arms of his lover. Federal funding during the Great Depression financed the creation of roads-making this natural formation accessible to tens of thousands of tourists each year.