Birthplace of Hyrum and Samuel Smith: Brothers of LDS Prophet Joseph Smith and martyrs of the LDS church

Hyrum Smith was the older brother of Joseph Smith and Samuel was the younger brother. Both men believed and followed their brother as he was called to restore the church of Christ. Hyrum would hold positions such as Apostle, counselor in the First Presidency and Presiding Patriarch to the church. Samuel's notoriety comes as being the first official ordained missionary of the church. Hyrum was murdered with Joseph Smith in Carthage Jail in Illinois in 1844 and Samuel in an attempt to save his brothers was seriously injured and died 3 days after they did. The exact location of farm is not currently known. 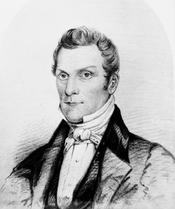 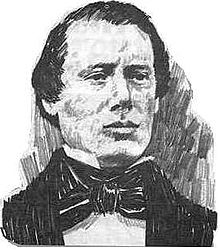 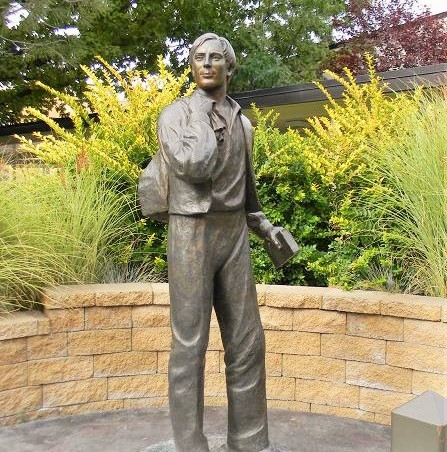 An artist's rendering of what the Smith family would have looked like after moving to New York from Vermont. Hyrum would be in the center standing, Samuel sitting to the left of father Joseph Sr., Joseph Jr., standing to the right of mother. 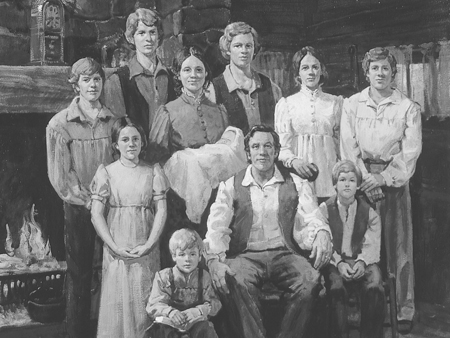 1914 photo of two LDS at the spot where Hyrum and Samuel Smith were born. Buildings in back are not of the original Smith farm, but built by the current occupants of the land at the time 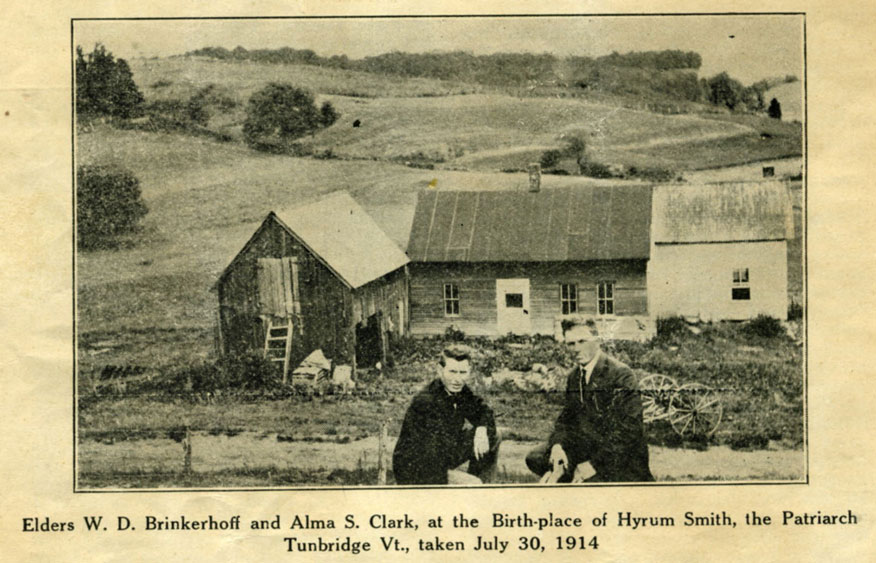 Hyrum Smith was born in Tunbridge, Vermont on the 9th of February, 1800, the second child to Joseph Sr. and Lucy Smith. Being a middling farm family, Hyrum, like many of the Smith children, focused their childhoods on farming. However, Hyrum was able to attend Dartmouth College for a time. He joined his family as they left Vermont and moved to Palmyra, New York. Joseph Smith was born in the family farm in Sharon, Vermont nearby in 1805 when the family moved there for a time before returning to Tunbridge.  Samuel Smith was born on March 13, 1808, also in Tunbridge. He was just about 10 when the family moved to New York.

When their brother Joseph Smith claimed to have had his vision of God and Jesus Christ in the grove of trees near they farm, like the rest of the family, the brothers believed Joseph and defended him against persecution from the locals. They also helped him keep the golden plates he obtained that were revealed to him in a nearby hill as again locals persecuted the family and sought to steal the plates. Although not participants in the translation process of what would become the Book of Mormon, they helped in making sure it was published and bore testimony along with six others who wrote that they saw and handled the plates.

Shortly after the church was officially organized in 1830 Samuel, who grabbed a large number of copies and set forth to spread the message of restoration. His missionary service resulted in a copy of the Book of Mormon to find itself in the hands of Brigham Young, who would become the second president of the church.

Both brothers helped in the establishment of church headquarters in both Kirtland, Ohio and Far West, Missouri. While Joseph and Hyrum were illegally detained in ironically named Liberty Jail, Samuel joined others in trying to defend the church settlements in Missouri that were sieged and then raided by mobs. He was withe David Patten, whom would go down as the first Apostle to die in the service of the church, thus a martyr. Forced to flee Missouri, Samuel and his now released brothers helped form the new settlement of Nauvoo, Illinois. As the church and city prospered, mobs from Missouri and Illinois brought out false charges and again Joseph and Hyrum were in jail.

When word came that a mob was descending on Carthage Jail on the 27th of June, 1844, Samuel, on horseback, raced to the jail from Nauvoo to try to rescue his brothers and two others also in jail, John Taylor and Willard Richards. When he arrived, it was too late and was forced to flee as mob chased him out. In his escape, he became severely injured internally and succumbed to his injuries a month later. Lucy Smith would lose three of her sons in a month All three are buried in Nauvoo.

In honor of Samuel Smith's actions as the church's first missionary, a statue was placed in and dedicated at the Missionary Training Center in Provo, Utah.

One of Hyrum's sons, Joseph F. Smith and grandson Joseph Fielding Smith would become future presidents of the church, with another direct descendant, M. Russell Ballard currently serving as an Apsotle.