One of the significant goals and successes of the Ten Year Development Program launched in 1948, Althouse Hall first served as the home of the chemistry and geology departments. Ground was broken on June 1, 1957, and the building, located on the John Dickinson campus just west of West College, was dedicated on November 8, 1958. It was designed by architect Elmer H. Adams, and constructed at a cost of $618,029. Dr. C. Scott Althouse, for whom the building is named, contributed the $300,000 gift that guaranteed this new facility. The building’s library was made possible by a $35,000 gift from Irénée du Pont, and served as a memorial to Alfred Victor du Pont, class of 1818. In 1964, a gift of $50,000 from Roscoe O. Bonisteel, class of 1912, paid for a roof-top observatory which included seven telescopes. The geology department later relocated to the Benjamin D. James Center, leaving the chemistry department as the building’s sole resident. 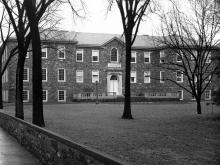