The Morgan County Courthouse is located in Berkeley Springs, WV. It was built in 1907 and was a two-story, three-bay, building constructed of yellow brick with limestone accents in the Neoclassical style. It featured a centered, octagonal clock tower that extended above the second story flat roof and dominated the main elevation. Also on the property are an annex (c. 1920) and former jail (1939). The courthouse building was damaged by fire in 2006 and was subsequently demolished and rebuilt.

Photo of the courthouse taken in July, 2011. 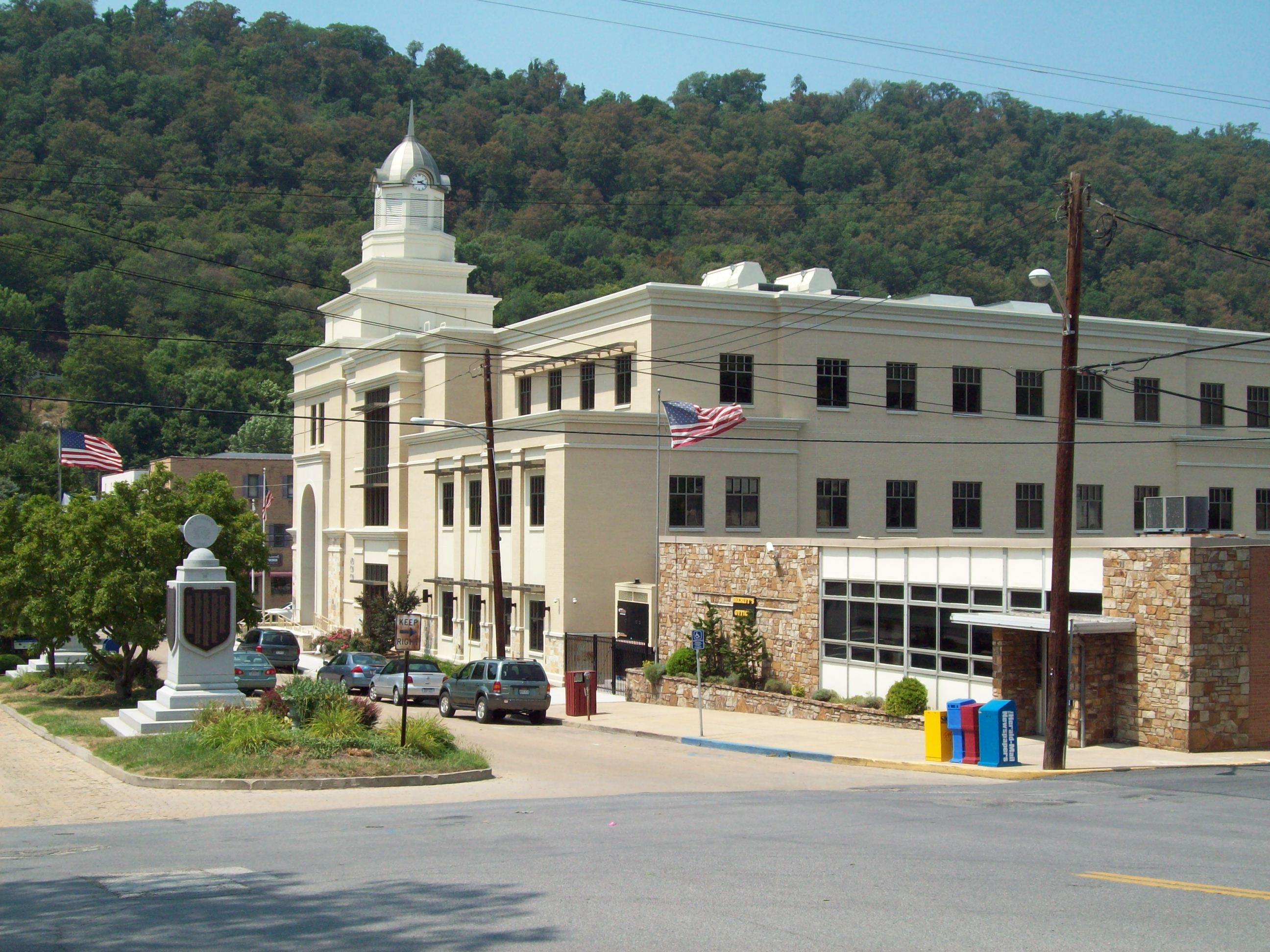 Photo of when the courthouse burnt down in 2006. 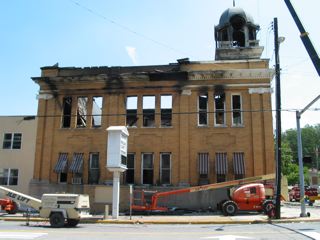 The Morgan County Courthouse has been around since the 1800s. The courthouse was built shortly after Morgan County was formed in 1820 from portions of Berkeley and Hampshire counties; the county seat was set in Berkeley Springs. In 1844, a fire swept through downtown destroying 14 buildings which included half of the resort town's hotel accommodations and the first of three courthouses Berkeley Springs will have.

The courthouse has been remodeled many times since the 1880s. In 1883, the courthouse received new carpet from the current sheriff, Sheriff Buzzerd; it's reported he replaced all the carpet due to all the tobacco spit on the carpet and wanted the courthouse to look more presentable. In 1905, after five years of demands for upgrades, the courthouse was finally renovated and given many upgrades. The roof of the courthouse was flattened removing the existing peaked roof; a clock was added to the clock tower that was sold to the county by a local jeweler in 1908. The clock had an illuminated dial and four sides each being four feet in diameter.

On September 5, 1908, the newly remodeled third courthouse was opened. In 1923, a brick addition was added to the courthouse as well as hardwood floors in the hall and lobby in 1930. In 2002, the original awnings were restored and the facility became handicapped accessible. All the renovations and upgrades done to the courthouse were quickly erased when the courthouse caught fire on August 8, 2006. On December 1, 2006, the county received a grant of $500,000 from the West Virginia Courthouse Facilities Improvement Authority to help rebuild the courthouse. The grant is the largest the authority has ever granted to an entity. The courthouse was eventually rebuilt and is open today.

Founded shortly after Virginia declared its independence from Great Britain in 1776 and named for the famous English spa resort, the town of Bath in what is now Morgan County, West Virginia centers on a cluster of natural spring waters that attracted visitors to the site well before the arrival of Europeans. One of the town’s earliest supporters was George Washington, Commander-in-Chief of the Continental Army at the time and a frequent visitor to the area over the course of the colonial period. Washington first arrived to investigate the natural springs there in 1748 at the behest of his benefactor Lord Fairfax, who had received the land surrounding it as part of an inheritance from his mother and showed an interest early on its potential as a resort destination. Eventually, Washington convinced Fairfax to donate the land to the government of Virginia, which passed legislation in the midst of the American War for Independence providing for the sale of quarter acre lots around the springs (which were to remain open for public use). Washington convinced many of his fellow rebel leaders to purchase those lots, ensuring the town’s status as a resort for the wealthy elite. The town continued to grow over the course of the nineteenth century. In 1802, when the first post office arrived to the area, it gained an additional moniker (Berkeley Springs) to avoid confusion with Bath County, Virginia to the south, and in 1820 the town became the seat of the newly created Morgan County. The town’s growth was temporarily halted, however, by the outbreak of the American Civil War. Because the town and surrounding county were largely pro-Union, the county became one of the many western municipalities to secede from Virginia in 1863 to form the new state of West Virginia. Afterwards, a struggle emerged in the town between factions seeking to profit from tourism to the springs and those supporting the growth of the area’s manufacturing sector, a dispute ultimately rendered moot with the collapse of local industry during the Great Depression. The core of the original town made its way onto the National Register of Historic Places in 2009 as the Town of Bath Historic District, which encompasses 218 contributing buildings, three contributing sites, six contributing structures, and one contributing object.