Dunker Church received its name from the German denomination of Baptists who settled in its location of Keedysville, Maryland, in the 1700s. Despite the church being a place of worship for a congregation strictly opposed to violence, the site became the location for one of the bloodiest Civil War battles in American history, resulting in 23,000 casualties. Members of the congregation were hesitant to move back in, and after a new church was built, services eventually died out. The location was destroyed by a storm before being purchased several times, ultimately being restored to its original structure where tourists can now visit the battlefield of Antietam. 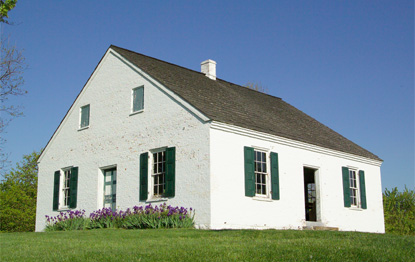 Dunker Church in the aftermath of the Battle of Antietam 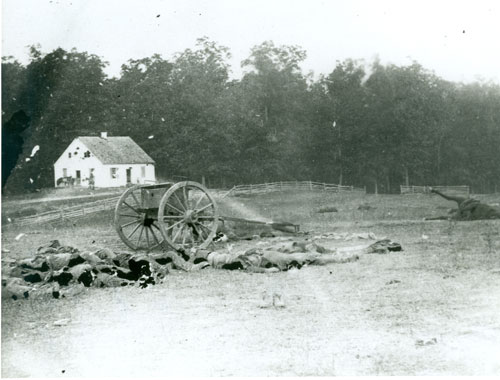 Dunker Church, destroyed after the storm 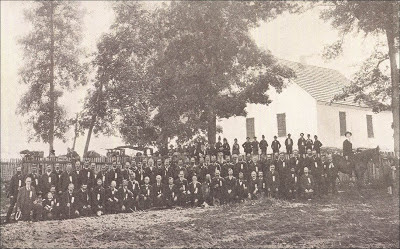 Inside look at the Church. 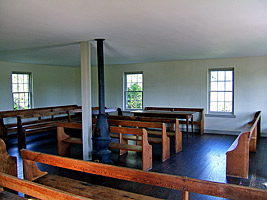 Dunker Church, located in Keedysville, Maryland, originated with the German Baptist Brethren’s settlement in the Sharpsburg area. After the Thirty Years War in Germany from 1618-1648, only three state churches were recognized. Dissenters were forced to commune in areas they would be tolerated, and in 1708, the denomination of eight fully-immersed Baptists was formed. By the mid-1700s, the “Dunkers,” given their name due to their full immersion in their religion, had arrived in Maryland, and settled in Sharpsburg by the 1850s. There, they were often referred to as the “Pennsylvania Germans” or “Deutsche” (Pennsylvania Dutch).

In 1851, land was donated by Samuel Mumma along Hagerstown Pike. In 1852, the Brethren began constructing a church that would be completed and in service by 1853. Ironically, a portion of their religion called for pacifism, meaning they refused military service. That, however, did not prevent the church from becoming the site of one of the bloodiest battles of the Civil War. The church was built on a ridgeline that Confederate soldiers used as a defensive position against the Union army, surrounding the church on the night of September 16, 1862 in preparation of the fight. The next morning, Union Major General George McClellan led the Army of the Potomac into battle against Confederate General Robert E. Lee.

The Union army’s I Corps and XII Corps charged the Confederate’s left flank stationed at the church, with the fighting scattering it with bullet holes. Meanwhile, Confederate General “Stonewall” Jackson led his brigade through the surrounding battlefield areas of Miller’s Cornfield and the West Woods. The Union soldiers then followed with two more attacks, one from the II Corps at Sunken Road, and one by the IX Corps led by Major General Ambrose E. Burnside. Burnside began to dismantle the Confederate’s right flank, but a division led by General A.P. Hill arrived from Harper’s Ferry in time to drive the Army of the Potomac back once more. On the 18th, both sides were too weak to advance, and the battle ended in a draw. The following day, however, Lee retreated, crossing the Potomac River into Virginia, and the battle was dubbed as a “victory” for the Union according to President Abraham Lincoln. There were a total of 23,000 casualties, with 2,108 of those soldiers killed on the Union side and 1,546 killed on the Confederate side. The remaining were wounded, missing, or captured.

Afterward, with fields in disarray and scattered with graves, in addition to thousands of soldiers to feed, resources were limited. Dunker Church was used as an emergency medical facility to treat wounded soldiers, and there is a record that it may have also been used as an embalming station. The German Baptist Brethren, opposing violence, were hesitant to return to the church. However, in 1864 it was finally renewed and re-dedicated. In 1899, the congregation constructed a new church in downtown Sharpsburg and were renamed the Church of the Brethren. While the new structure slowed services at the old Dunker Church, it was not until 1916, followed the death of the congregation’s Reverend John Otto, that services at Dunker Church halted completely. Maintenance and upkeep stopped as well, and the structural damage from the Battle of Antietam was exacerbated by tourists chipping bricks from the church walls.

On April 24, 1921, a destructive storm finally caused the church to collapse completely, and the congregation deeded it back to the Mumma family who had originally donated the land. The property was then sold to Elmer Boyer, who salvaged some building materials before selling the property to Charles Turner. Turner built a structure on the original church’s foundation in the 1930s to operate as a lunch counter and souvenir stand, however, this caused protests that it was an “eyesore” to the original beauty the church once held. There were many failed attempts to repurchase and reconstruct the property properly until a 1951 state highway proposal threatened the site. The Washington County Historical Society gathered funds to complete the sale, Turner’s structure was removed, and the property was then donated to the federal government.

The Korean War, although, meant there was not enough available funding for new projects, and for over a decade the site was nothing but the church’s foundation and a small sign marking the location. Eventually, Maryland Governor Millard Tawes allocated funding for the church to be rebuilt in time for the Civil War Centennial. Elmer Boyer still had the original building materials, and in 1961, the church was finished and re-dedicated once again in its original position on the Antietam battlefield, where the National Park Service also restored other features of the landscape of the battle, such as the West Woods.