The Dun Glen Hotel (sometimes spelled Dunglen or Dunglenn) was one of the two hotels located near Thurmond, WV. Thomas G. McKell was given 12,500 acres in Fayette County, WV when he married Miss Jean Dun of Chillicothe, OH by her father as a wedding present. Here, he erected the Dunglen Hotel at the turn of the twentieth century. The hotel and Thurmond had their fates inextricably linked: the economy in Thurmond drew people in and the hotel provided them reason to stay, even if only for a brief time. With the hotel’s reputation for good times — often to the point of excess — it was not difficult to attract local and national visitors who dubbed the attraction, “Dodge City of the East.” The area’s largest coal mine transaction, and the world’s longest continuous poker game at fourteen years, both occurred in Dun Glen Hotel. Despite its reputation and impact on the community, the building was only extant for twenty-nine years. In 1930, it burned to the ground and was never rebuilt. Over the next few decades, Thurmond followed ruinous suit and quietly subsided into a ghost town.

The Dunglen Hotel sat upsteam and across the river from Thurmond. 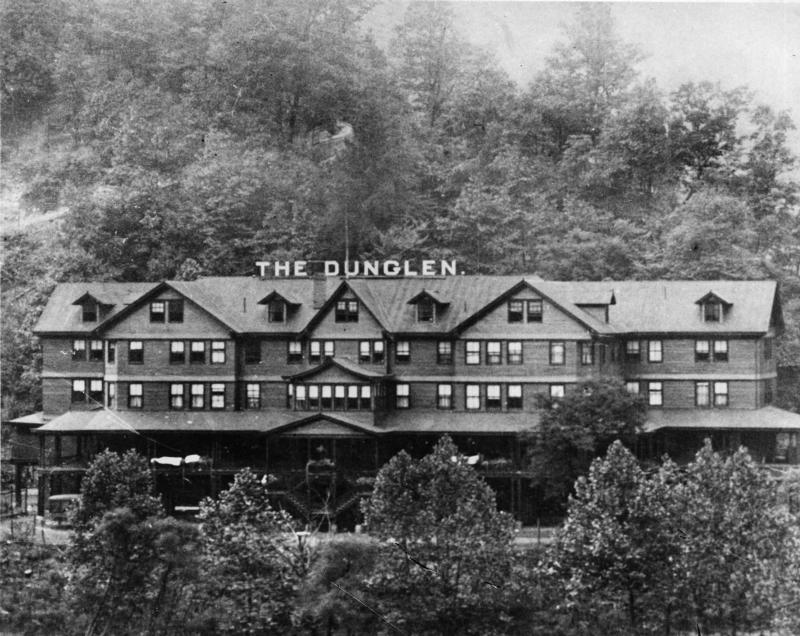 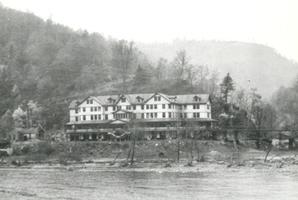 Photo of the hotel under construction ca. 1900. 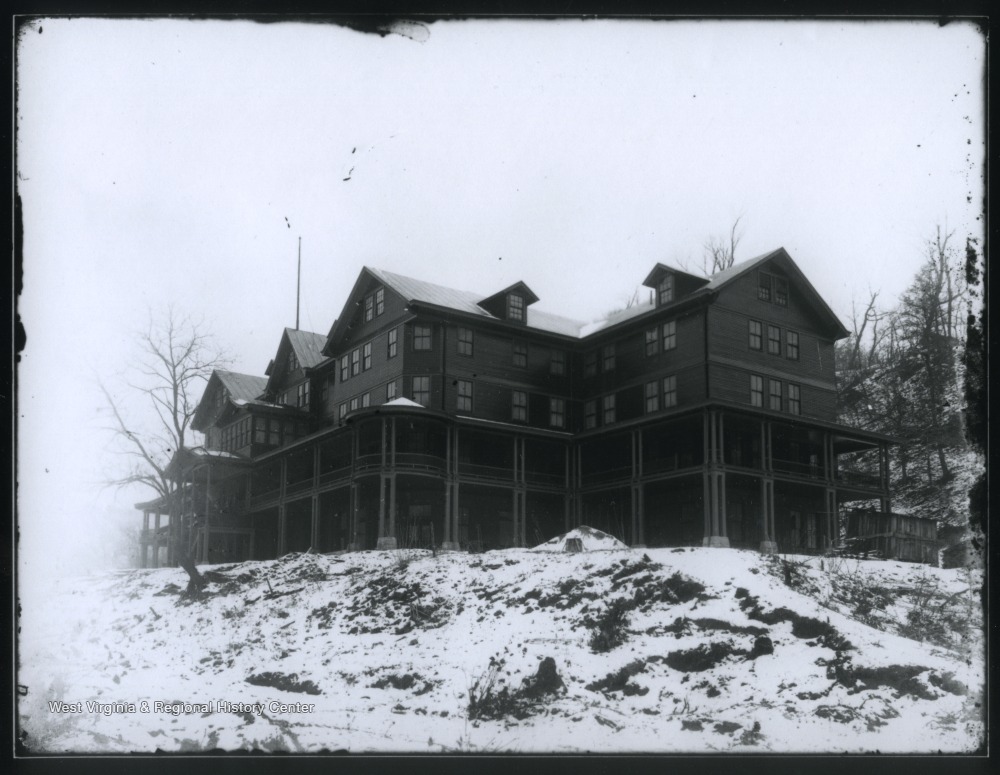 As the town of Thurmond grew in the late nineteenth century, rail lines brought thousands of travellers and workers through the area. Thomas G. McKell, a wealthy land-owner saw a business opportunity in the booming area and funded construction of the Dun Glen Hotel. The four and a half story building was almost better described as a complex. The basement contained a grocery and bank vault, while the main floor held dining rooms, ballrooms, a perpetually operational bar, ice plant, barber shop, laundry, post office and an enormous gambling hall. $2.50 was enough to cover a room in one of the one hundred guest rooms that occupied the top three floors. The basement was brick while the rest of the building was constructed of wood, an ominous portend of the building’s fate. The building’s opening night was characterized by an enormous crowd who gathered to hear a symphony from Cincinnati, Ohio.

The Dun Glen Hotel was an infamous site of sin due to the amount of gambling, drinking, dancing, and prostitution that occurred behind its doors. In fact, the building single handedly gave rise to two sayings about Thurmond: “no Sunday west of Clifton Forge and no God west of Hinton” and “the only difference between Hell and Thurmond is that a river runs through Thurmond.” Dun Glen’s never closing bar drew particularly fierce ire from Thurmond founder, W.D. Thurmond. Thurmond founded his town with the ideals of a puritanical religious society in mind. In 1901, alcohol was completely banned from Thurmond, perhaps as a response to Dun Glen Hotel, though perhaps the hotel was a response to the alcohol ban. However, if anything the ban only served to further encourage patronage of the Dun Glen Hotel, which was conveniently located across the river and just outside of the Thurmond city boundary.

Thurmond’s growth and the growth of the Dun Glen Hotel were inextricably linked. The booming economy brought more workers, investors, and coal owners to the area, while the hotel made Thurmond the place to be. Thurmond quickly acquired the nickname, “Dodge City of the East,” thanks to Dun Glen Hotel.  A number of notable events occurred at the hotel in the early twentieth century. The largest coal mine transaction to ever occur in the New River region was brokered in Dun Glen Hotel. After some deliberation, a representative for the Berwind-White Coal Mining Company delivered a $1,250,000 check to the room of W.P. Rend, as payment for Rend’s coal mine at Minden. Another significant event was the world’s longest poker game. According to Ripley’s Believe It or Not and the Guinness Book of World Records, a fourteen year-long continuous poker game took place at the hotel.

Though Thomas McKell was briefly able to appreciate the success of his venture, he died in 1904, three years after Dun Glen Hotel opened. Upon McKell’s death, his son William McKell took possession of the hotel. On August 11, 1904, McKell added a bank to the hotel, the New River Banking and Trust Company. However, the First World War was hard on Thurmond and the hotel never fully recovered. When disaster struck in the 1930s, the Dun Glen Hotel was already a rapidly declining shadow of its former self. On July 23rd, 1930 at around 10:30 PM, the hotel caught fire. None of the hotel occupants were injured, though two firefighters were while battling the fire. The fire proved uncontrollable and the hotel burned to the ground. Losses were estimated at $100,000. Initial news reports claim that the fire was caused by a charged electric wire which fell on the building. Several theories that the fire was the result of arson have also been promulgated.

When he passed away in the mid-1930s, leaving no immediate heirs, William McKell’s land went to cousins. The fall of the hotel hurt Thurmond’s already faltering economy and no major structure was ever rebuilt on the land. Since that time, much of the property has been purchased by various companies. Several businesses such as a grocery store, gas station, and whitewater rafting company built structures in the area and often incorporated the foundation or materials from Dun Glen Hotel. Currently, the National Park Service has a maintenance facility, ranger station, and dormitory on the property. These buildings continue the tradition of incorporating physical components of the once pivotal Glen Dun Hotel into modern structures.