On May 19, 1919, soon after its completion, this 21st Street Viaduct was named the Rainbow Viaduct in tribute to Alabama’s famous 167th Infantry of the Rainbow Division. Renowned for bravery and honor, the 167th was the nation’s only regiment in World War I referred to by its home state – “The Alabama.” Made up of men from throughout Alabama, including a large number from Birmingham, this regiment had to its credit the following brave deeds, among countless others: Advanced furthest its German lines – to Sedan Took the first German prisoners captured by Americans Only Rainbow Regiment to achieve two Honor Medals Fought in trenches two days longer than any other American regiment The only Southern regiment in the first army at occupation on Rhine, the 167th fought in the battles of Luneville, Baccarat, Esperance-Souain, Champagne-Marne, Red Cross Farm following Chateau-Thierry, Alsne-Marne, St. Mihiel, Essey-Paunes, Meuse-Argonne, Sedan.

The Marker of the Rainbow Viaduct 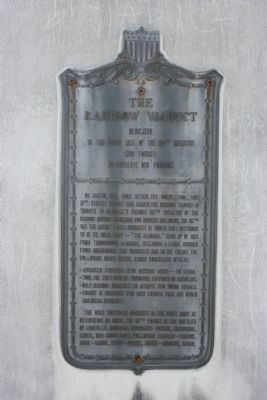 The Rainbow Viaduct shown against the city 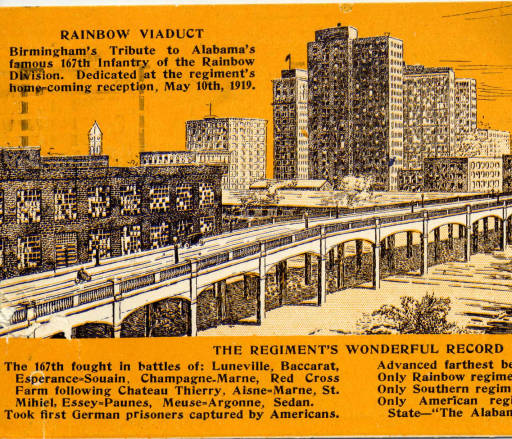 On June 21, 1918 Supreme Commander Foch asked General Pershing to move the “Rainbow” Division to the Champagne-Marne to help the French in the coming battle to save Paris. The entire 42nd Division took part in that defense that stopped the German “Peace Offensive” on July 15, 1918. The brunt of the Central Powers assault in the Champagne was taken by the 167th (Alabama) Infantry Regiment and the 109th French Regiment. For that battle, Colonel Screws replaced Major Hartley A. Moon as commander of his 2nd Battalion with Captain Everett H. Jackson, placing Jackson’s PC in the command post of his French counterpart. It was the first change of leadership in the Alabama regiment and all three battalions of the 167th were deemed by French commanders to have fought fiercely and well.  This marker, topped by the Adrian helmet used by the French troops in the second half of WWI, commemorates the place where Allied troops stopped the German during the Champagne battle. The marker is placed at about the height of the Intermediate Line where two French companies and Companies E and F of the Alabama 167th withheld severe attacks launched by the Germans.

General Gouraud said that the “Rainbow” put a new spirit into France.  Foch immediately put the victorious Allied Army on the offensive. Four days after winning in the Champagne, he ordered a Franco-American drive northeast from the town of Chateau-Thierry. The 167th (Alabama), with its sister regiment in the 84th Brigade, the168th (Iowa) on its right flank, led the “Rainbow” Division push into a great battle at Croix Rouge Farm on July 26, 1918. There the Alabama regiment lost 162 killed, including 3 Lieutenants and 2 Captains, company commanders. More than 1,000 from the 167th (Alabama) were wounded. But their victory forced the Germans to retreat to positions on the east of the Ourcq River, about six miles from the Croix Rouge Farm.

On the next day, July 27, the weakened 167th (Alabama) and 168th (Iowa) regiments of the 84th Brigade were joined by the “Rainbow’s” fresh 83rd Brigade. Regiments abreast, the full “Rainbow” Division attacked across the Ourcq River on the morning of July 28, and opened the battles on the hills east of the river. Corporal Sidney Manning of Company G of the 167th (Alabama) was recommended for the Congressional Medal of Honor for his heroic work in that morning’s attack.

The regimental operations officer, Captain Mortimer H. Jordan, M.D. was wounded that day and died in a field hospital. Command of F Company, Gadsden, passed twice that morning due to wounds. Command of G. Company, Ozark, passed due to wounds. Command of the combined 1st and 3rd battalions was passed from Major Dallas B. Smith to Captain Ravee Norris. Lieutenant Colonel Bare, regimental executive officer was gassed and evacuated. Major Carroll took over command of the forward PC from him but was wounded. Captain Herman W. Thompson, commanding H Company, was seriously wounded and evacuated.

The 84th Brigade’s commander, Brigadier General Robert A. Brown was relieved during the battle by Colonel Douglas MacArthur on the recommendation of Major General Menoher, commander of the “Rainbow.” The 168th (Iowa) regiment’s commander, Colonel E. R. Bennett, was replaced by Lieutenant Colonel Mathew A. Tinley. An Iowa battalion commander was also replaced.

After four days of hard fighting by both sides, the Germans began a massive retreat toward the Rhine River on August 2, 1918. Casualties in this operation for the “Rainbow” were 184 officers and 5,469 men.

The 42nd Division, reequipped and brought back to full strength, was ordered to take part in the all American attack at St. Mihiel. After more than a week of night marches to the jump off position, the division attacked on September 11, 1918, delivering the main blow in the direction of the heights overlooking the Madine River. Just as at the Croix Rouge Farm, C Company and D Company of the 167th (Alabama) led the “Rainbow” assault force. The attack was a total surprise to the Germans and came at a time when they had begun to retreat. The 167th objective was accomplished by nightfall of the first day. Thirteen American divisions, about half a million men, took part in the highly successful operation.

The Rainbow Viaduct is Dedicated to the Memory of the Jefferson County Members of the 167th Infantry, Rainbow Division of Whom were Killed in Action or Died of Wounds in the World War 1914 - 1918.

Open all year round.