At some unknown time in the remote past, the promontory known today throughout the Parkersburg area as Fort Boreman Hill came to be inhabited by humans. In May 1860, Harper’s New Monthly Magazine published a sketch of a flat-topped Indian mound surrounded by a parapet identified only as a “Mound and Circle Near Blennerhassett’s Island.” No mound of such appearance has existed within living memory, but the late Wood County historian, C. R. Rector, identified it as having been situated on top of Fort Boreman Hill. The prehistoric Indians valued the hill for the same reasons it is highly regarded today: its towering elevation, its excellent building sites, and the matchless view it offers of the surrounding countryside.

During the Civil War, tens of thousands of Union soldiers passed through Parkersburg. 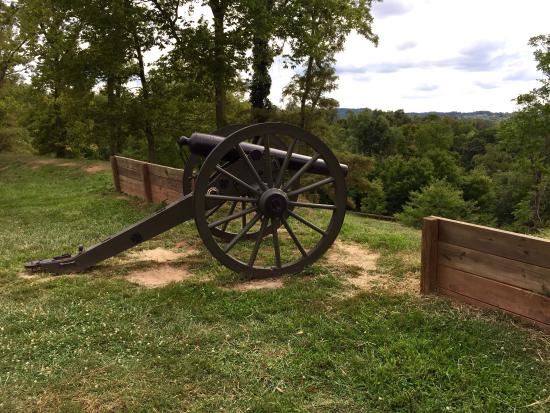 Three men, Daniel Grogan, Thomas Boice, and Mortimer-Gibbony, were convicted for the murder of Abram Deem, a well-respected Wood County farmer who was a Confederate sympathizer. 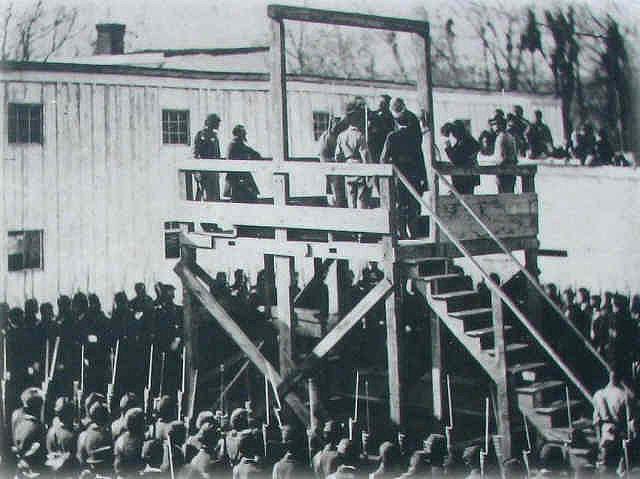 No other location in the Mid-Ohio Valley commands such a wide-ranging view of its commercial activity. Fort Boreman was a natural citadel for governing river traffic. 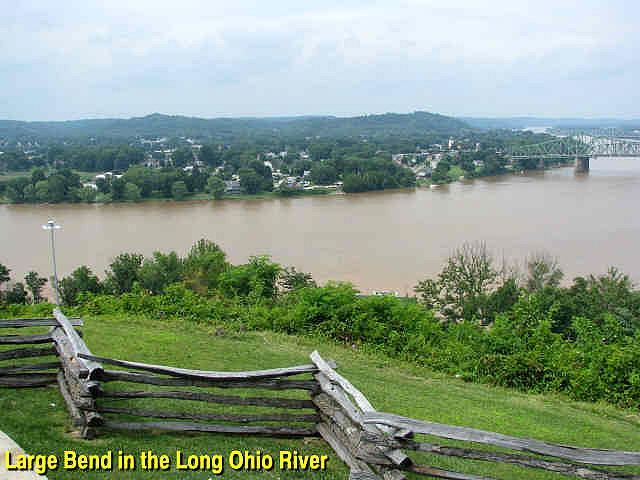 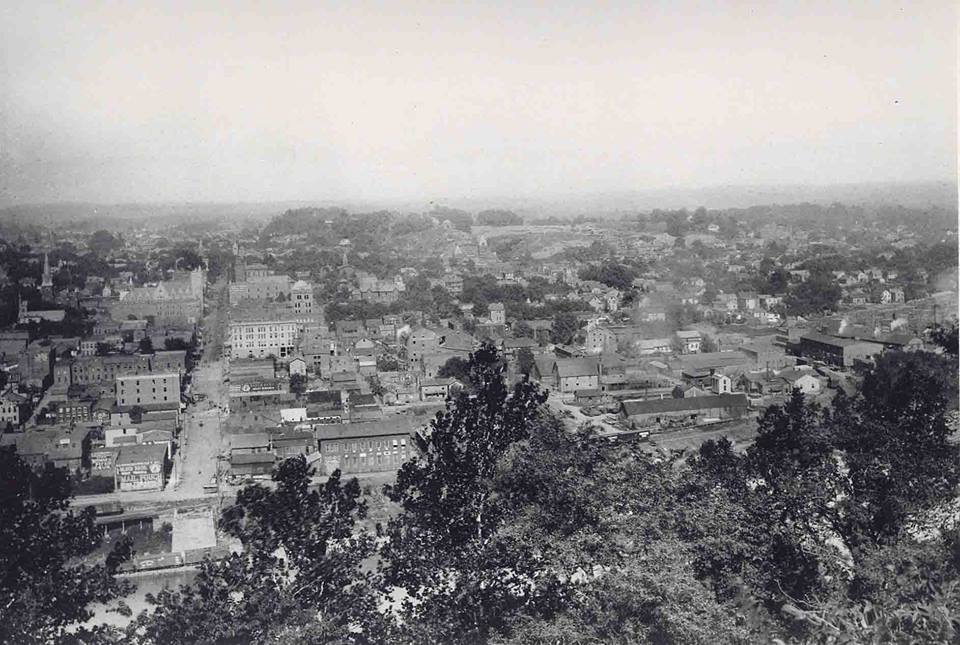 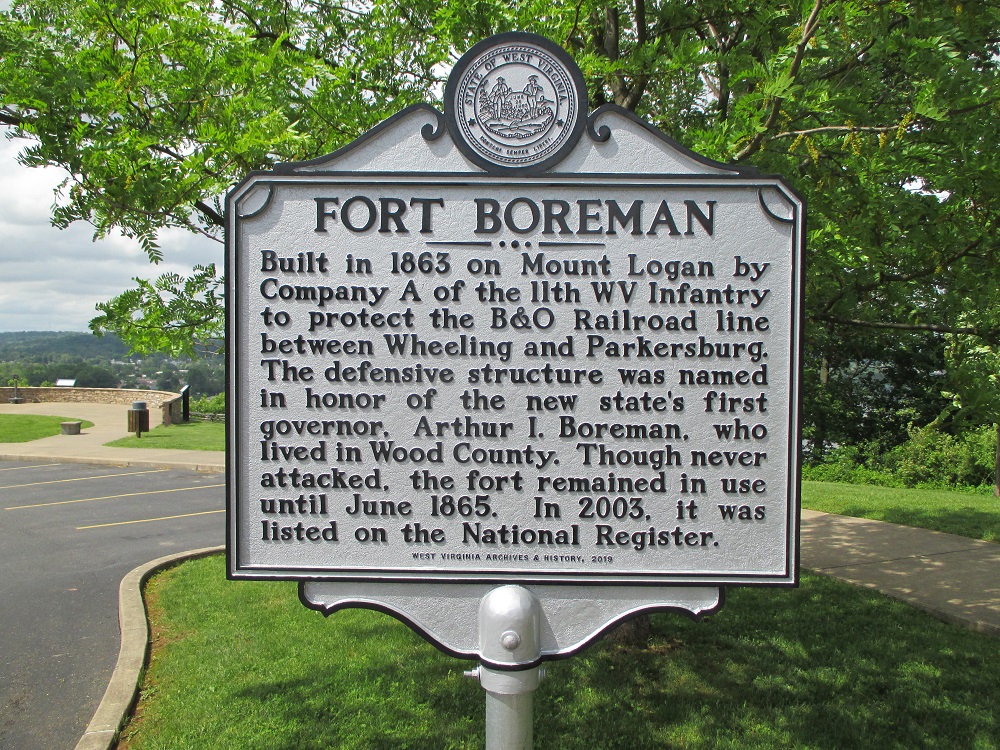 While the early years of the hill’s history is shrouded in mystery, it is known that it played a role in early Wood County as timber was cut from its slopes, floated across the Little Kanawha River and used to construct the county’s first “official” courthouse.

The first owner of the eminence is not known, but a strong local tradition relates that only twenty-five cents per acre was paid for the well-forested terrain. By 1820 it had became the property of Francis Beckwith. His descendents retained ownership into the early years of the next century. In the early years, the hill was christened “Mount Logan”; it is not known whether this was in honor of the famous Indian or perhaps a local individual.

Only at the time of the Civil War does the history of the hill come into sharp focus. In May 1861, Union troops began occupation of Parkersburg. Because of the controlling vantage point offered from Mount Logan, troops from the Eighteenth Ohio Infantry soon occupied the hilltop. In 1863, two forts were planned for the protection of the railroad facilities at Parkersburg: one atop Mount Logan and the other was to be situated on Prospect Hill, today’s Quincy Hill. Though the Prospect Hill project was never completed, the fortification that would be known as Fort Boreman was commenced in the summer of 1863.

Details of the fort are limited. Perhaps our best description comes from H. E. Matheny’s Wood County, West Virginia, In Civil War Times. According to Mr. Matheny, plans called for two zig-zagging trenches four feet deep in a semi-circle around the hill. Large logs were placed on the outer wall of the fort, two high and two abreast. Stones and earth were packed between the logs, leaving portholes for firing. Recent research done for the Corridor D project using Civil War archives, has found two somewhat different shapes for the fortification. One is a three-sided configuration, the other shows five sides; both were military drawings. Associated buildings required for the approximately 150-man garrison would have been a powder magazine and barracks, or winter quarters of some sort. The fort may have had five cannon. The cannon were never fired in a defensive situation, only to welcome high-ranking officials or perhaps to honor a holiday. One such occasion was probably in June 1863, when the new State of West Virginia came into being. It was on this occasion that the fort became known as Fort Boreman, in honor of Arthur I. Boreman, the Parkersburg resident who was chosen first Governor of the new state. In August 1863, during another ceremonial firing, one of the cannon exploded, killing one soldier and seriously injuring another.

It was in the same time period that the area known as Fort Boreman attained more, though not so glamorous, notoriety. The entering into Parkersburg of thousands of soldiers, and oft times the not-so-popular men and women who followed them, only added to the frequency of the dreaded and very contagious disease of small pox. Though the City of Parkersburg already had a place to quarantine those who contacted the disease, the influx of transients caused the city fathers to look for a more suitable and perhaps larger “pest-house”.

The site of this “new” pest house is not certain. City records indicate that in the spring of 1862 a house to be used for such purposes was rented from Andrew Galvin. It is suspected that the house was situated on or near the eastern slopes of Fort Boreman “ridge”, perhaps in the area of Lauckport. City records also indicate that in 1867, after the war, the City of Parkersburg purchased 21 acres in Lauckport area and thereon build a pest house. The “house of doom,” as it came to be known was used intermittently into the 1920s, at which time it reportedly burned. Even though the property is identifiable, no record is to be found of the house or the burial ground that was located nearby.

As has often been stated the War Between the States quite often pitted brother against brother. The choice of loyalty also split counties, rural communities and neighborhoods. Many strong feelings of loyalty and resentment continued after the war was ended. In September 1864, Abram Deem, a peaceful and well-liked farmer from Lubeck District who had shown sympathy to the southern cause, was murdered by two of his neighbors, Daniel Grogan and Thomas Boice. A third person, Mortimer Gibbony, was also convicted of the murder; Gibbony was not from this area. All the murderers were of the Union persuasion. Following a rather swift trial and sentencing, the wheels of justice were slowed as appeals were made. Finally, in February 1866, Grogan and Boice were hung within the shadows of the then vacant, Fort Boreman. Gibbony, who had escaped the local jail a few months before, was finally captured and in June 1866, he climbed the same gallows steps that his two accomplices had climbed but a few months before. It was recorded that thousands of people came to Parkersburg to witness these two gruesome events.

After the fort had been decommissioned, it is reported that, for safety reasons, the quarters that once housed the soldiers, were burned.

While documented history of the next few decades is scarce, newspaper articles reveal that the townspeople used the hill extensively, for picnicking/and recreational purposes. In 1893, a large portion of the hill was offered to the City of Parkersburg for park purposes, but the offer was not accepted.

In 1898 cannon fire once again roared from Fort Boreman; as before, it was friendly fire. As terrible as the Civil War was, many cities throughout the country wanted a reminder of it; often this “reminder” would be a cannon that was used in the war. Parkersburg was no different. In 1898 Parkersburg received its cannon. The most appropriate place for the cannon to be placed was Fort Boreman Hill. The cannon, which soon became affectionately known as “Long Tom”, could deliver a sound heard county wide. The percussion from the blast too often did more than just rattle windows in the many houses that were at the base of Fort Boreman Hill. After several years of announcing holidays and special events, the people living nearby felt that they had replaced enough windows, and “Long Tom” had to go. The once proud artillery piece was soon placed on the scrap pile. Fortunately, in September of 1921, the Parkersburg Kiwanis Club rescued “Tom,” and agreed to cover the cost of placing the cannon at the Parkersburg City Park.

In 1927, the NemesisTemple purchased the nearly 175 acres that make up what is often referred to as Fort Boreman Hill. Through documentation of the organization’s activities there is scarce, it built a concrete road into the property and constructed picnic areas and a dance hall. Both Masonic members and the public, including Boy and Girl Scouts, used these facilities and the wooded grounds through the mid-1940’s.

For whatever reason, the hill then began a period of demise. Weeds grew, rubbish was dumped, and the fort was soon over-run by locust sprouts, briers and honeysuckle. Then in 2006 the Wood County Commission started work to reclaim the fort area from nature and to construct a park. In 2007, Fort Boreman Historical Park opened to the public. The park features a partially reconstructed Union Civil War fortification, trenches, interpretive signage, picnic shelters and tables, nature trail and an overlook that offer dynamic views of Parkersburg and the Ohio and Little Kanawha Rivers.