Courthouse Square holds a historic marker noting the site of the first use of indirect fire. Although firing at an unseen mark is now a well-known battle strategy, it was unheard of in 1863 during the Civil War; this technique has gone on to shape subsequent battles, allowing soldiers to target their enemy from relatively safe positions. 18-year-old Corp. Milton W. Humphreys, a Confederate gunner, invented the concept of indirect artillery fire and put his ideas into action when targeting a Union fortress in Fayetteville. Although it had a minimal effect on that day’s battle, it has had significant impact on modern warfare and battle strategy. The marker commemorating this event reads: “Nearby on May 19-20, 1863, Corp. Milton W. Humphreys, gunner in Bryan's Battery, 13th Virginia Light Artillery, C.S.A., made first use of indirect artillery fire in warfare. Target was Union fort in Fayetteville.” 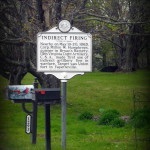 In 1997, West Virginia’s Department of Culture and History erected a marker to recognize the first use of indirect fire during battle. 18-year-old Corp. Milton W. Humphreys manned a howitzer as a part of the Confederate army. A howitzer is a piece of artillery similar to a canon with a short barrel facing upwards, allowing for high angles of ascent and descent. Howitzers are organized into groups called batteries: Corp. Humphreys was a part of Bryan’s Battery of the 13th Virginia Light Artillery. As a child, Humphreys was considered a prodigy and entered Mercer Academy in Charleston at age 13 to do college-level work. At only 16 years old he enrolled in Washington College (known today as Washington and Lee University), but soon enlisted as a Confederate soldier on March 27, 1862, almost a year after the Civil War started.

After spending the winter of 1862-1863 near Dublin, Virginia, Bryan’s Battery was ordered to move to Fayetteville and attack the Union fortification to distract Federal forces. About a mile and half from the fort, Confederate soldiers found a plateau and cleared path through the woods from which to attack. In his book, Military Operations in Fayette County, West Virginia, Humphrey records the events that led up to his trial of the indirect firing method:

“The second piece (mine) was posted on the plateau at the end of a straight opening which had been cut in the woods and ran directly toward the Federal Fort. My piece opened first and was immediately answered, and my third or fourth round cutting away the Yankee colors, they shelled us so vigorously and accurately with several guns that we were compelled to move to a place nearby where we could not be seen for the timber in front of us and the smoke behind us rising from the woods beyond the road which were on fire.”

Having moved out of sight of the Union fortress, Corp. Humphreys used trigonometry to calculate the angle at which the muzzle of his howitzer must point for its ammunition to reach over the woods and land on the Federal camp. He viewed the mile between himself and the fortress as the base of a triangle and calculated how long it would take his shell to drop from the air. Humphreys used this method for the remainder of the day and the following day’s battle, firing a total of only 65 shots (due to a shortage of ammunition). Union soldiers finally withdrew after two of their soldiers were killed, seven were wounded, and nine went missing.

The military tactic Corp. Humphreys invented that day has a significant impact on modern warfare. Indirect fire, the process of firing from one point to another unseen point, was preferred over direct fire in World War II and continues to be utilized in battle today. Concerning his discovery, Humphreys modestly states, “I claim no credit for the ‘invention'; the thing is so obvious. In fact, if I invented it, I did not do it at Fayetteville, but in my day-dreams when I was about 8 years old.”