The Kam Wah Chung Company Building, is a state park and a National Historic Landmark that preserves early Chinese culture in John Day in the U.S. state of Oregon. 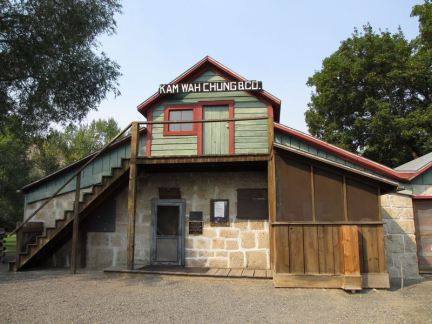 In 1848, gold was discovered in California and throughout the 1850s Chinese immigrants were a major source of labor for the mines in the western U.S. In the 1860s, Chinese laborers were recruited in large numbers from both China and the U.S. western mining industry to help build the western section of the Transcontinental Railroad. By the 1870s, Chinese immigrants were working in the lumber mills in Oregon and Washington and the coastal fishing industries on the West coast as well as in agriculture, construction, and retail.

Because of the large number of Chinese laborers in the West, Chinese communities began to form to support the growing immigrant population. By the late 19th century, the Chinese community in John Day was the largest one of its kind in eastern Oregon. In 1887, two Chinese business men, Lung On and Ing Hay, decided that their combined business and medical skills would benefit their community. They purchased the Kam Wah Chung Company Building and began to sell goods and services from a general store and an herbalist shop located in the front of the building.

The Kam Wah Chung Company Building contained not only Ing Hay's treatment room and pharmacy, but also an informal library, a post office, and a general store. The building was expanded over the years to include a second floor and a new wing and was a hub for Chinese immigrants and non-Chinese residents and workers in eastern Oregon. The general store served as a wholesale outlet for other stores in neighboring communities and bulk supplies from the store were sent to isolated ranches and outposts. The store's shelves were stocked with a variety of items including such Chinese imports as sandalwood fans, ginseng, candy, rice, silk cloth, pipe tobacco, firecrackers, beer, incense, soaps, teas, canned goods, sugar, and gambling supplies. Clothing from China was also available through mail order. In addition, the Kam Wah Chung Company Building had a bank, an assay office, and tables for letter-writing.

Today the Kam Wah Chung & Co. Museum contains one of the most extensive collections of materials from the century-long influx of Chinese immigrants in the American West. It was listed on the National Register of Historic Places in 1973 and designated a National Historic Landmark by the Secretary of the Interior in 2005.