Battle of the Virginia Capes

The Battle of the Capes featured 19 British and 24 French warships battling to a standstill leading up to the Battle of Yorktown. Because the battle preserved the French blockade of the Chesapeake and occupied the British Navy, General Charles Cornwallis was unable to secure the supplies and reinforcements that might have allowed him to fight his way from Yorktown. Instead, he surrendered to the American rebels-an action that ended the Revolutionary War. On September 5, 1781, off the coast of Virginia, near the mouth of the Chesapeake Bay, one of the most critical naval battles in United States history took place. The "Battle of the Capes" only lasting two and a half hours and did not involve any Americans, but this battle was one of the decisive factors that assured the United States would win independence from Great Britain. 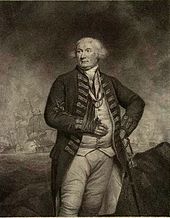 Formation of fleets: British ships are Black, French ships are white. The Middle Ground to the left are the shoals that Graves tacked to avoid. 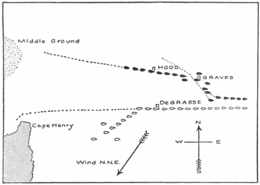 The French line (left) and British line (right) do battle 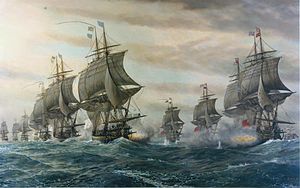 This historic marker along the coastline tells the history of one of the most important naval battles in American history. 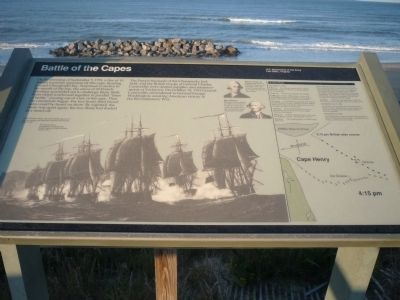 The success of the French fleet in gaining control of the Chesapeake Bay prevented Cornwallis from receiving reinforcements and helped ensure that Washington could use the bay to transport troops and supplies to Yorktown. Without De Grasse's fleet gaining control of the Chesapeake Bay from the British, victory by the American and French armies at Yorktown would have been impossible. Without the French victory at the Battle of the Capes, American independence from Great Britain might never have been achieved.

With the British ships in Black and the French in white the two sides formed a parallel line of attack near the mouth of the Chesapeake Bay and continued to sail in an eastward direction away from the bay.   The French had a firing advantage, since the wind conditions meant they could open their lower gun ports, while the British had to leave theirs closed to avoid water washing onto the lower decks. The French fleet, which was in a better state of repair than the British fleet, outnumbered the British in the number of ships and total guns, and had heavier guns capable of throwing more weight.  The French, in a practice they were known for, tended to aim at British masts and rigging, with the intent of crippling their opponent's mobility.

This battle was the beginning of the end for the British empire in its fight for the Americas and thus lead to a stronger defense lead by Washington which in turn lead to the surrender of Lord Cornwallis, October 19, 1781 at Yorktown. Even though the British fleet's arrival in New York set off a flurry of panic amongst the Loyalist population. The news of the defeat was also not received well in London by King George III who is noted as saying  that "after the knowledge of the defeat of our fleet, I nearly think the empire ruined."

With the French success there was a firm control of Chesapeake Bay, completing the encirclement of Cornwallis. In addition to capturing a number of smaller British vessels, de Grasse and Barras assigned their smaller vessels to assist in the transport of Washington's and Rochambeau's forces from Head of Elk to Yorktown.

The Battle of Chesapeake Bay was one of the decisive battles of the world. Before it, the creation of the United States of America was possible; after it, it was certain." ---Michael Lewis, The History of the British Navy

https://en.wikipedia.org/wiki/Battle_of_the_Chesapeake War for Independence—Battle of the Capes on u-s-history.com Center of Military History, Battle of the Virginia Capes