Mount Porte Crayon is the sixth highest point in West Virginia and one of the least explored. Weather conditions at Mount Porte Crayon can be extreme and many spruce trees are observed to be “flagged” meaning they lack branches where high winds blow from the west. The area around Mount Porte Crayon is home to one of the best and largest existing examples a northern hardwood forest in the Central Appalachian Forest region. Mount Porte Crayon also contains a nature preserve that are habitats to threatened species such as the Cheat Mountain salamander and West Virginia northern flying squirrel. The preserve and the summit are accessible only to experienced hikers willing to bushwhack through dense foliage and rough terrain. 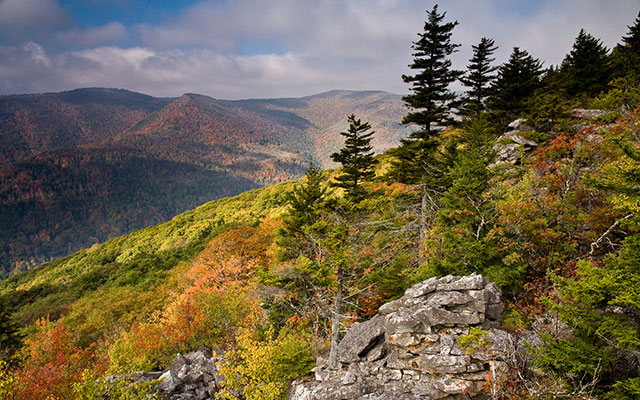 Page 1 of a written account of the naming of Mount Porte Crayon by Sara Strother King, great-great grand-daughter of David Hunter Strother. 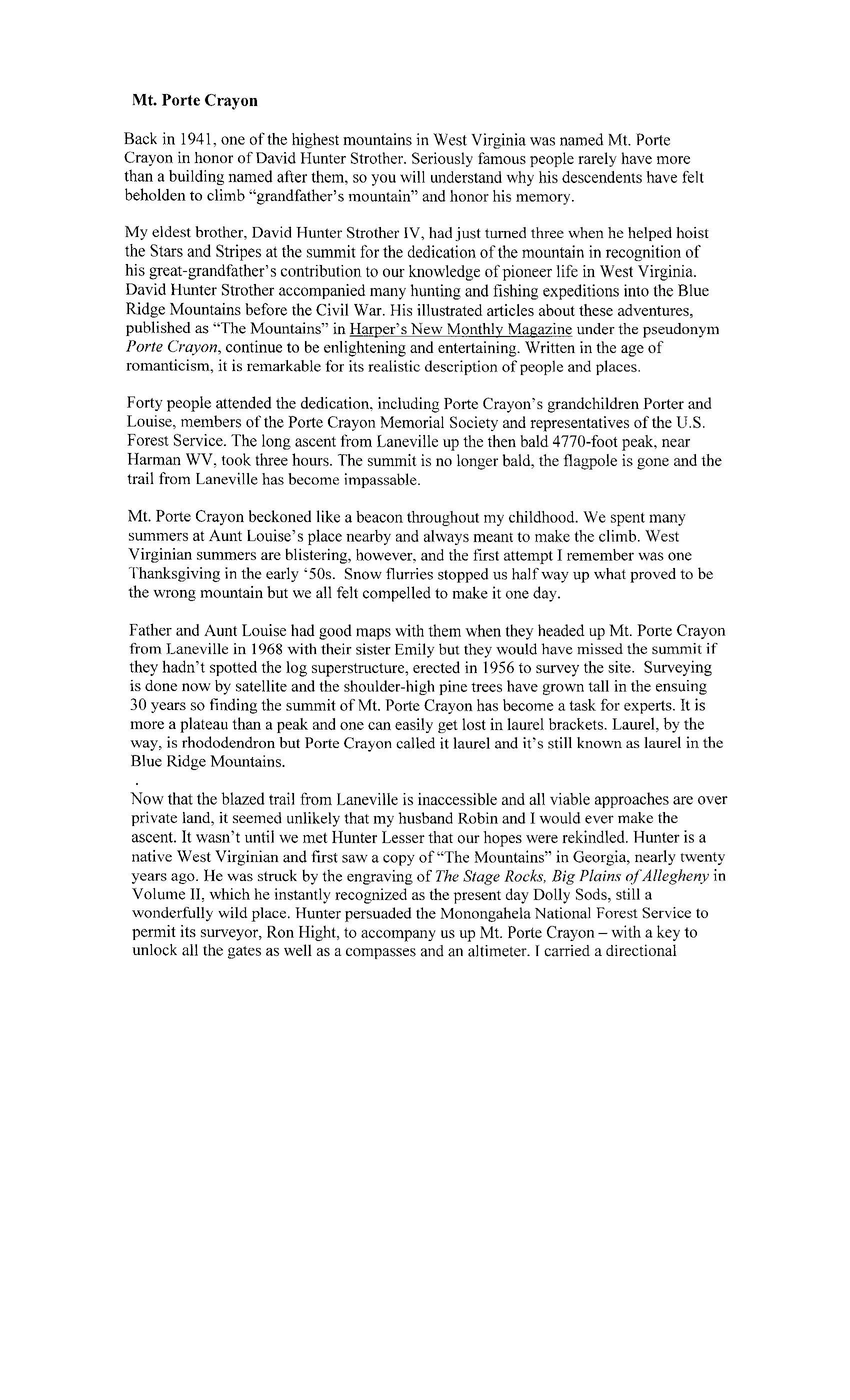 Page 2 of a written account of the climbing of Mount Porte Crayon by Sara Strother King. 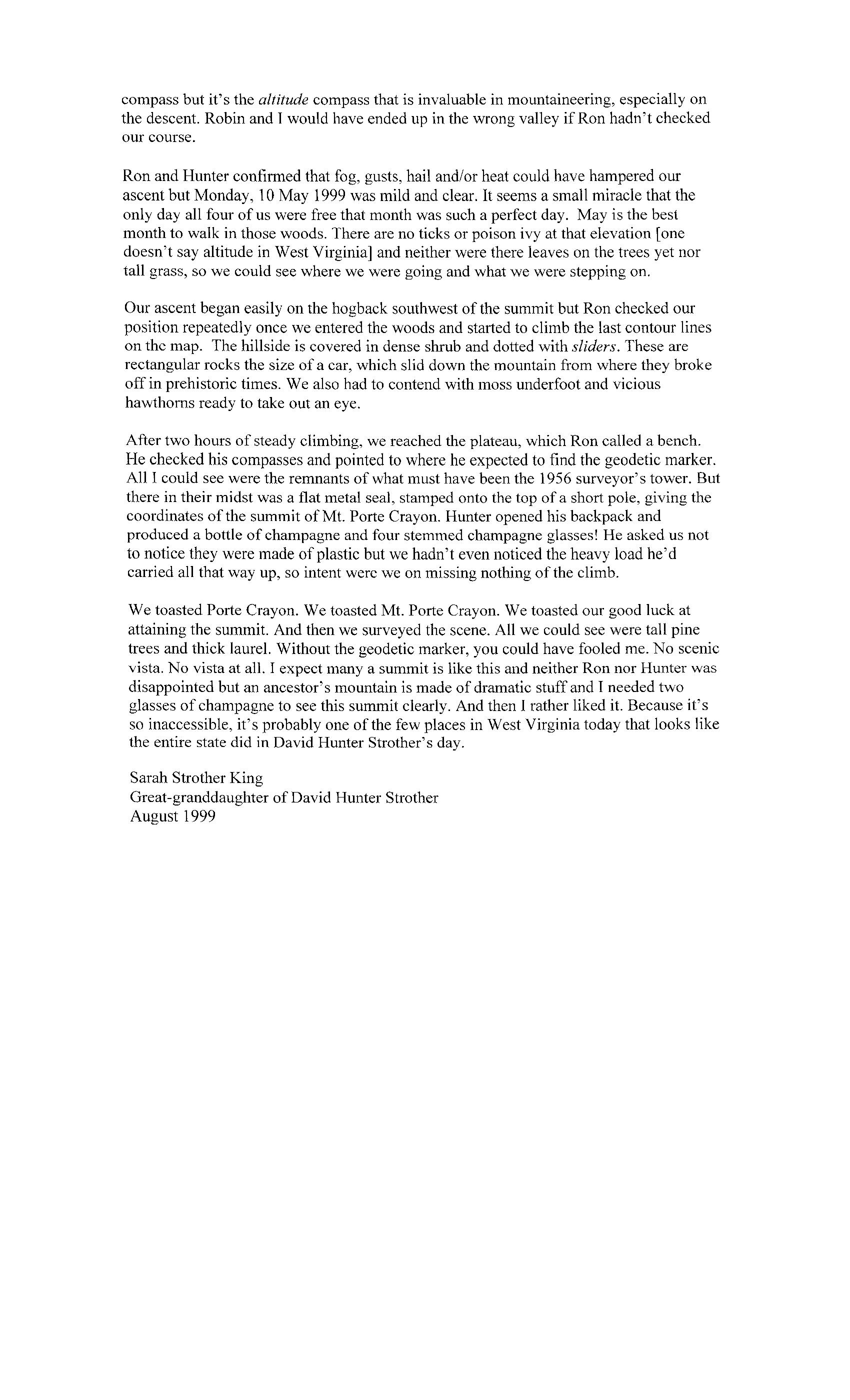 Mount Porte Crayon is named after David Hunter Strother, who served as a news correspondent during the Civil War. A native of Martinsburg, West Virginia, Strother often went by the pen name Porte Crayon and was a well-known writer and illustrator. Some of his published works are “The Blackwater Chronicle” and “A Visit to the Virginia Canaan.”

Hikers can get to the preserve by the south of the 4,770-foot summit of Mount Porte Crayon, along the Allegheny Front in Pendleton County, West Virginia. The preserve is surrounded by U.S. Forest Service lands including the Monongahela National Forest.  This preserve is remote and largely inaccessible. Public access to Mount Porte Crayon Preserve is through the Roaring Plains Wilderness Area via the Flat Rock Run Trail or Roaring Plains Trail. Formal trails do not reach the summit and considerable bushwhacking is involved through thick red spruce and rhododendron. Good navigation skills, map, compass and/or GPS are highly recommended. An old railroad grade serves as a guide in much of the length of the property but is degraded in many portions leaving hikers to cross over wet and rocky terrain. Storms can move in rapidly so hikers should be prepared for varied weather conditions. The U.S Forest Service Office located in Elkins can be contacted for weather conditions.

Discover US 33: The Shawnee Trail

The Shawnee Trail is a branch of the Seneca Trail that extends from Elkins to Seneca Rocks, and mostly follows the route of US 33. The trail is named for the Shawnee peoples who used the route in their raids from the west into the South Branch Valley (in modern eastern WV). In the early Americas Native American societies developed a vast network of trails and pathways that connected societies from New York into Canada all the way into the Southeast and Southwest, into Mesoamerica. Archaeologists have found evidence of trade goods traveling between the Great Lakes and Gulf Coast, and large trading centers such as Cahokia (near modern St. Louis) facilitated long-distance trade between various regions in North America. Trails were also used as warpaths and many other uses, just as roads are used today. The trails through West Virginia were used by the Catawba, Algonquian tribes, the Cherokee, and nations of the Iroquois Confederacy. White explorers and settlers learned and used these paths and over time many have become the roadways of modern times. The Seneca Trail roughly follows the route of U.S. 219 through West Virginia from Silver Lake on the Maryland border to Princeton on the state’s southern border with Virginia. The trail is named for the Seneca, one of the Six Nations of the Iroquois Confederacy. By the 1660s the Iroquois Confederacy had established control over much of the Appalachian region, extending their influence to the Mississippi river and conquering or demanding allegiance from many Native nations in the region. The Seneca Trail was a main road used by the Iroquois in their conquest and management of the land within their Confederacy. Several trails connect to the Seneca Trail, such as the Shawnee Trail near Seneca Rocks, WV and the Catawba Trail that follows the Tygart River Valley up towards Pennsylvania.