Beginning in 1982, The Chicago Children’s Museum was founded based on program setbacks in Chicago’s public schools. It was founded by the Junior League of Chicago and would start off at the Chicago Public Library in two hallways of the establishment. The museum would soon offer trunk shows and traveling exhibits due to the large crowds that would gather to see it in person. The museum now includes 3 floors of exhibits and activities that provide crowds with highly interactive exhibits, sensory experiences, and education. The exhibits and programs focus mostly on literature, science, math, the performing arts, and health. 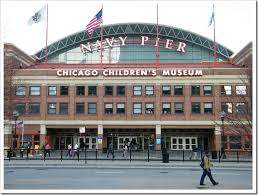 Originally named the Express Ways Children’s Museum, it was founded in 1982 by the Junior League of Chicago, who were seeking other educational opportunities for children because of public school cutbacks during the time. The museum started displaying exhibits in the Chicago Public Library within two hallways of the building. The first ever exhibit was called “Getting to Know Hue” which focused on color, light, music, and literature. From there, interest in the exhibits arised and more people visited the museum. The museum started doing more trunk shows and showed exhibits all over Chicago as they started finding new places to store displays.

In the year of 1995, the museum found a permanent home right on the Navy Pier. This new facility has 57,000 square feet of space for exhibits and included three floors of educational displays to visit. It originally reopened at the pier as an anchor tenant before being refurbished into a museum. The museum has over 650,000 people visit it and has many programs that children can learn from. It does have an admission fee, but provides free entry for children 15 years old and under.

The museum is the fourth largest in the entire United States. In 2006, plans were made to relocate the museum over to the Daley Bicentennial Plaza in Grand Park. Supporters believe it will allow double the space for other exhibits and give more access to the community, but others say that it will interfere with the space of the park and provide a green light for other organizations to move there. However, the museum opted out of the deal in 2012 signing a 90-year lease with the Navy Pier. It provided extra space for the museum and an announcement was expected in 2013 providing more details.