The Day the Wall Came Down

"The Day the Wall Came Down" is a monument that represents what happened towards the end of the Cold War. There are five horses that are running through the remains of the Berlin Wall after it disintegrated. The horses stand for freedom people yearn for from all nations, while the wall in this sculpture represents road blocks that may be in the way while striving for freedom. The artist that created this monument goes by the name of Veryl Goodnight, who is from Colorado. This memorial can be found on Texas A&M's campus near the George Bush Presidential Library and Museum.

The Day the Wall Came Down, located on Texas A&M's campus. 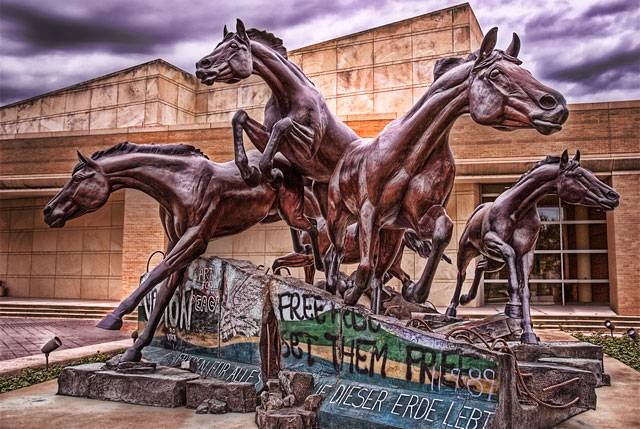 Veryl Goodnight, artist, who gives her opinion on what horses represent. Her opinion led to the creation of this monument. 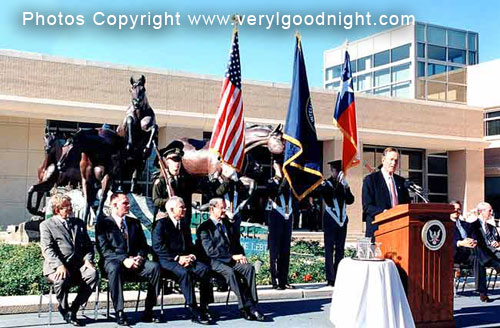 After World War II, Germany was divided up into two sections. The United States took West Germany and Russia took East Germany. West and East Berlin were divided by the Berlin Wall. The intention of the Berlin Wall was to prevent citizens from crossing over into the opposing country, which was controlled by a separate government. If they dared to cross, escapees were executed.  A total of 171 people were gunned downed as they tried to cross the Berlin Wall.

On June 12, 1987, Ronald Reagan demanded Soviet Union leader, Mikhail Gorbachev to tear the wall down. Shortly thereafter, Reagan got what he bargained for. On November 9th, 1989, East Berlin's Communist Party announced that they were free to cross the wall from there on out. The people went crazy and rightfully so. They crossed the border, while some took hammers to the wall to knock it down.

Veryl Goodnight's idea of her sculpture developed as all of this was taking place. She was watching TV the day the wall fell. Then, Goodnight had a dream of horses running through the rubble of the Berlin Wall. From there, she put her dreams to work and made the statue. Since this is a monument, there are no set hours that a guest can visit, nor is there a phone number for contact information. It is open for everyone, for free.

"THE DAY THE WALL CAME DOWN: The History Behind the Sculpture." Veryl Goodnight.com. Accessed August 2, 2017. http://www.verylgoodnight.com/wall.htm.