The Birmingham Terminal Station was the main passenger station for Birmingham, Alabama fro 1906 until the 1950s. The station filled two blocks of 26th street (now Carraway Boulevard). It was the main stop for out-of-town visitors, but when automobile and air travel came, the building was neglected and led to demolition in 1969.

Inside the Birmingham Terminal Station. 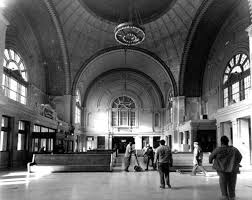 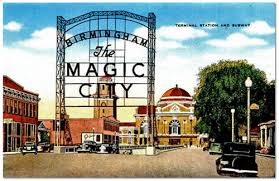 Picture of the Birmingham Terminal Station. 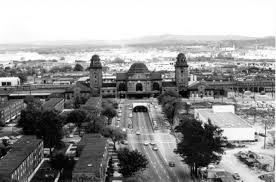 In the 20th century, Birmingham has seven railroads, six of which were joined together to form the Birmingham Terminal Company. This company wanted to develop a landmark passenger station. They purchase First Congregational Christian Church and other parcels in 1905 for property to this project.

The company hired P.Thornton Mayre, and architect, to make plans for this structure. His design was a Beaux-Arts inspired structure with a sixty-four-foot sky lit dome over the waiting room, and the interior walls in a Tennessee marble. The exterior of the building was a light brown brick. The central waiting room covered 7,600 square feet and was covered with a central dome 64 feet in diameter. Connected to the waiting room was the ticket office, ladies’ waiting room, a smoking room, barber shop, news stand, and a telephone booth. Architects have described the station as "Birmingham Baroque". The construction took two years and cost two million dollars. It's opening in 1909 was a major event for the city and included a balloon race and a parade.

In 1926 a big sign outside the station was put up and read, "Birmingham, the Magic City". In 1952, the sign was tore down because the railroad station was no longer the main entrance to the city due to automobiles and air craft.

During the Depression, the station fell, but in the late 1930s it again became an important transportation for the area. In 1943, the station got a $500,000 renovation which included new paint, new interior fixtures, and sandblasting. The station continued as the primary transportation up until the early 1950s.

By 1960 only about twenty-six trains per day went through Terminal Station, compared to the fifty-six trains in the 1950s. As early as 1962 the Terminal Station was being considered for redevelopment. William Engel and Engel Realty approached Southern Railroad, the current owner of the station, with plans of a 10-million-dollar project to be put on the land currently held by the station. They planned for a new, smaller station, Social Security building, two office buildings, and a large motel. The new development would create about 3,000 jobs, but would include tearing down the building. Ultimately the redevelopment plans were never built, and the Social Security built a new office elsewhere in 1974.

The railroad applied to Alabama Public Service Commission for permission to demolish the building, and on June 30, 1969 the commission approved the request. They had to set aside the arguments of preservationists in saying the only considered “the necessity and convenience of the traveling public”. The Terminal Station no longer met those needs of travel. The Birmingham Terminal Station was demolished September 22, 1969. The Birmingham Station joined the ranks of the lost structure.