On June 21, 1964 voting rights activists John Chaney, Andrew Goodman, and Michael Schwerner were murdered. The three young men had come to Mississippi to support the Mississippi Freedom Summer which included efforts to register African Americans and challenge their exclusion from the polls. The three students had recently arrived from northern universities along with other students and had been sent to investigate the burning of Mt. Zion Church. Victims of a Klan conspiracy, their deaths provoked national outrage and led to the first successful federal prosecution of a civil rights case in Mississippi.

This historical marker commemorates the lives of the three civil rights workers and the way that their deaths served as a turning point in the Civil Rights Movement. 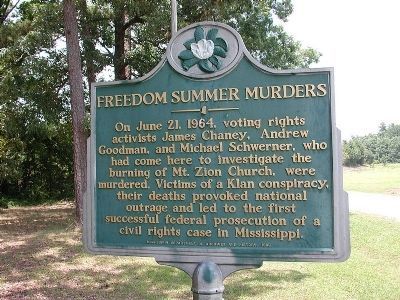 John Dittmer, Local People: The Struggle for Civil Rights in Mississippi-to learn more about this book, please click the link below. 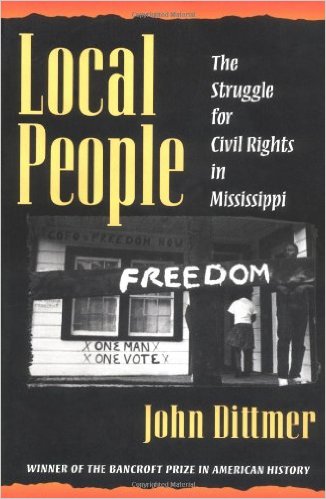 In the early summer of 1964, college students and activists like Michael Schwerner, Andrew Goodman, and James Chaney attended a three-day program in Oxford, Ohio that was sponsored by the National Council of Churches. The conference trained recruits for the Mississippi Summer Project and instructed them in the strategies of non-violence.

Upon the arrival of northern college students to this section of the state, local Ku Klux Klan members were instructed to activate Plan Four by their leader Sam Bowers. Plan Four anticipated "the elimination" of civil rights activist Michael Schwerner, the first white civil rights worker who organized a boycott of a white-owned business and worked to register African Americans around Meridian. The Klan anticipated that Schwerner's death would serve as a warning for future civil rights activists.

On June 16, 1964, Schwerner asked permission from the black congregation at Mount Zion Church to use their church as the site of a "Freedom School." The KKK responded by having thirty armed members surround the church. The Klan later burned the church after beating some of the members who attended the meeting.

Michael Schwerner, Andrew Goodman, and James Chaney notified CORE officials that they were going to investigate the destruction of Mt. Zion. Reconginzing the danger, they asked that their fellow activists look for them if they were not back by evening. The trio inspected the burned-out remains of the church and visited with congregation members that were beaten. The Klan made it known that they were looking for the trio and some of their members met with Deputy Sheriff Price. Price arrested the trio and put them in the Neshoba County jail. After a grueling five to six hours in jail the trio was released, led them to their parked car, then tailed as they headed east out of town on Highway 19.

After following the CORE station wagon out of town, Price returned to Philadelphia to drop off an accompanying Philadelphia police officer, then raced back onto Highway 19 in pursuit of the three civil rights workers. With the support of the police, Klan members captured, beat, and murdered the three civil rights workers. The bodies of the three young men were taken to a dam site at the 253-acre Old Jolly Farm. The bodies were placed together in a hollow at the dam site and then covered with tons of dirt by a Caterpillar D-4.

Meanwhile at the CORE office in Meridian, staffers were growing increasingly concerned about the long overdue civil rights workers. At 12:30 A.M., a call was placed to John Doar, the Justice Department's point man in Mississippi Doar feared the worst.  By 6:00 A.M., Doar had invested the FBI with the power to investigate a possible violation of federal law. The morning after the civil rights worker's disappearance, the phone rang in the office of Meridian-based FBI agent John Proctor.  Within hours, Proctor was in Neshoba County interviewing blacks, community leaders, Sheriff Rainey, and Deputy Price.

By the next day, June 23, Proctor had been joined by ten newly arrived special agents and Harry Maynor, his New Orleans-based supervisor. The first big break in the FBI investigation, called MIBURN came when Proctor received a tip that a smoldering car had been seen in northeast Neshoba County.  While Proctor was at the scene, searching the area around what turned out to be the burned blue CORE station wagon, he looked up to see Joseph Sullivan, the FBI's Major Case Inspector.  It was by then abundantly clear that the Johnson Administration was placing top priority on the case.  By June 25, the federal military had joined the search, with busloads of sailors arriving in Neshoba County to beat their way through snake-infested swamps and woods. Days later, FBI Director J. Edgar Hoover would fly to Jackson to announce the opening of the FBI's first office in Mississippi.

By December 1964, the Justice Department had enough information to authorize arrests.  On December 4, a team of federal agents swept through Neshoba and Lauderdale Counties arresting nineteen men for conspiring to deprive Schwerner, Chaney, and Goodman of their civil rights under color of state law.  Six days later, a U. S. Commissioner dismissed the charges, declaring that the confession on which the arrests were based was hearsay evidence. A month later, government attorneys secured indictments against the conspirators from a federal grand jury in Jackson.  The Justice Department was again disappointed, however, when on February 24, 1965, Federal Judge William Harold Cox threw out the indictments against all conspirators other than Rainey and Price on the ground that the other seventeen were not acting "under color of state law."  In March 1966, the United States Supreme Court overruled Cox and reinstated the indictments. Rather than attempt to refute the charge, the government summoned a new grand jury and, on February 28, 1967, secured re-indictments.