The State Museum of Pennsylvania

Located within the Capitol Complex in Harrisburg, the State Museum of Pennsylvania was commissioned by Governor Samuel Pennypacker in 1905 to “…collect, care for, and exhibit the flora, fauna, history, archaeology and fine arts of the Commonwealth.” It was originally housed in the Executive Library and Museum Building beginning in 1907 and moved into its current building in 1964. Today, it offers numerous permanent and rotating exhibits that showcase the history, people, artwork and natural science of Pennsylvania. The museum also houses a planetarium. The current museum building was added to the National Register of Historic Places in 2014.

The circular building that houses the State Museum of Pennsylvania was added to the National Register of Historic Places in 2014. 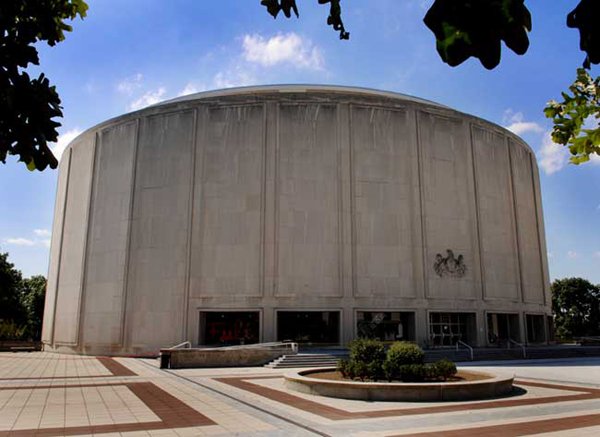 An aerial shot of the Capitol Complex in Harrisburg. The State Museum is located at the upper right. 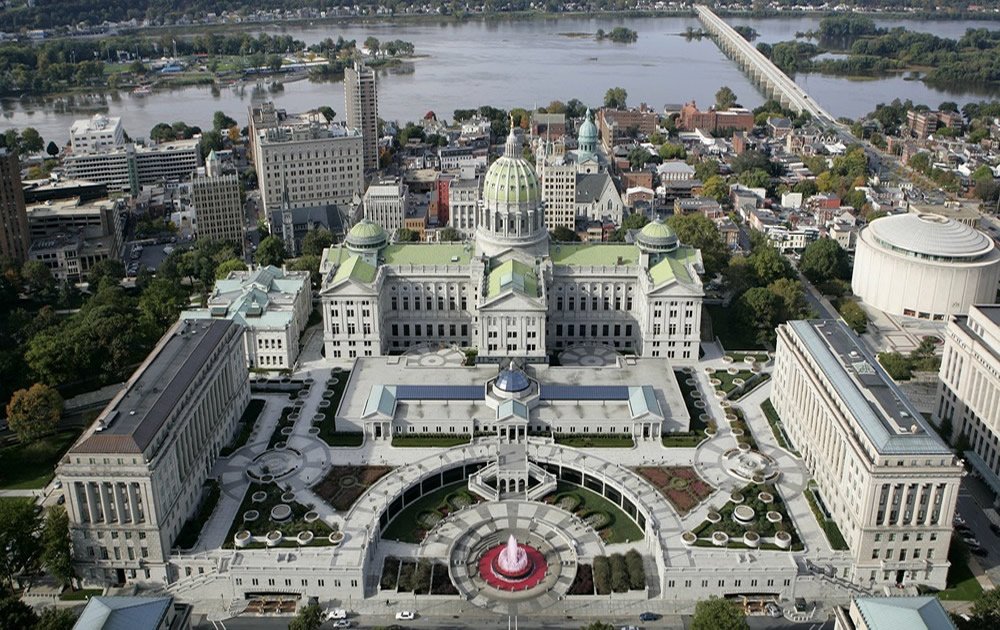 This 18-foot tall statue of William Penn resides within the first floor lobby of the museum. 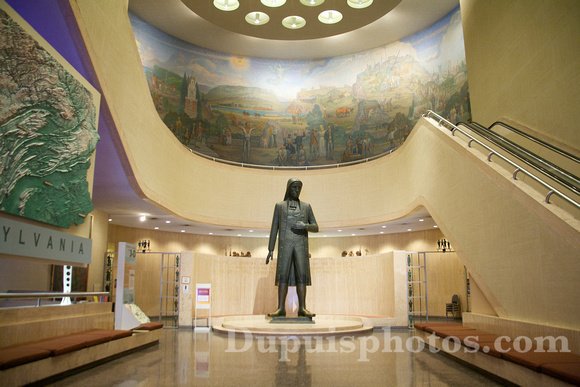 The entrance to the museum's permanent Civil War exhibit. 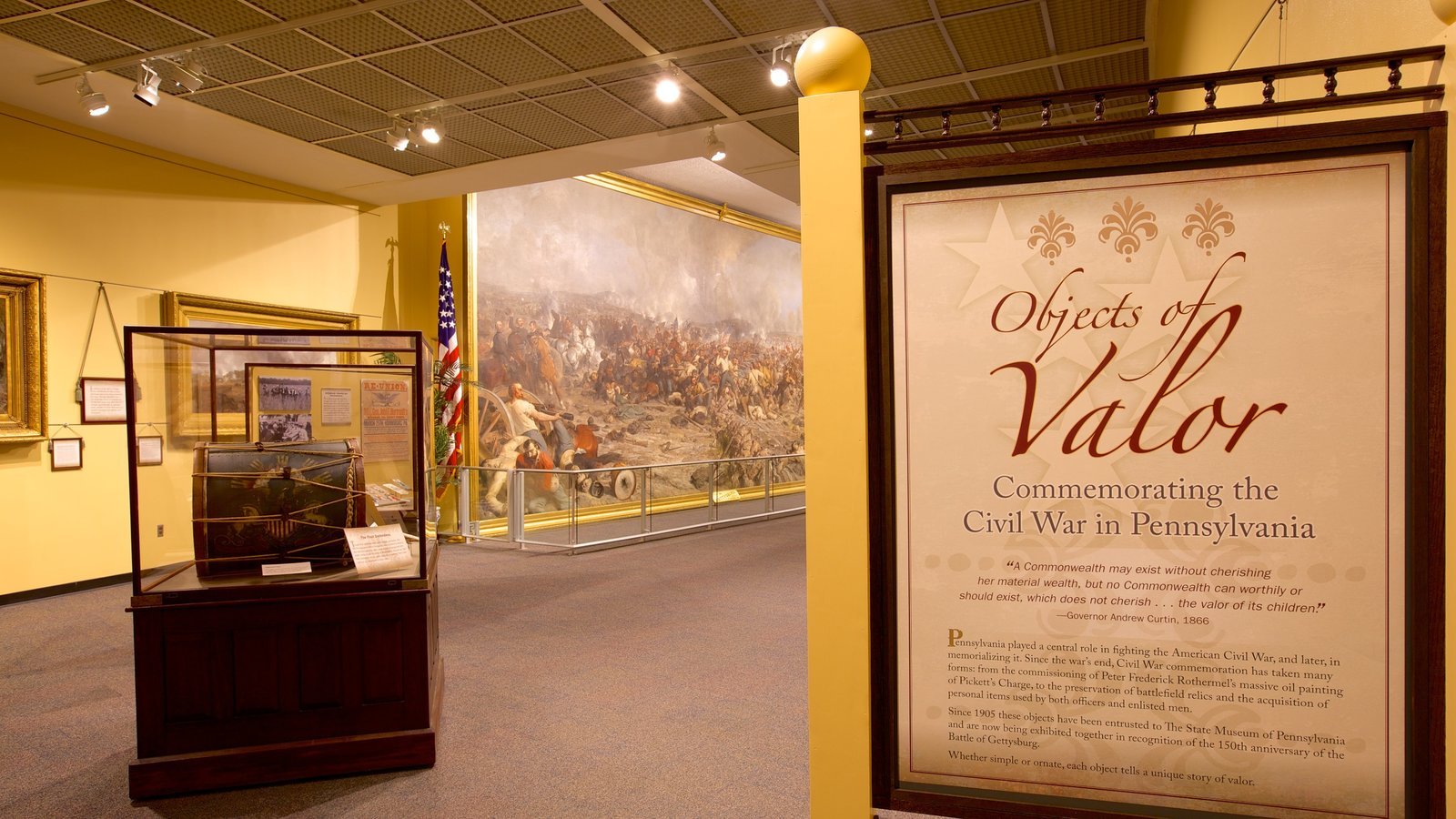 The museum during construction in June of 1963. 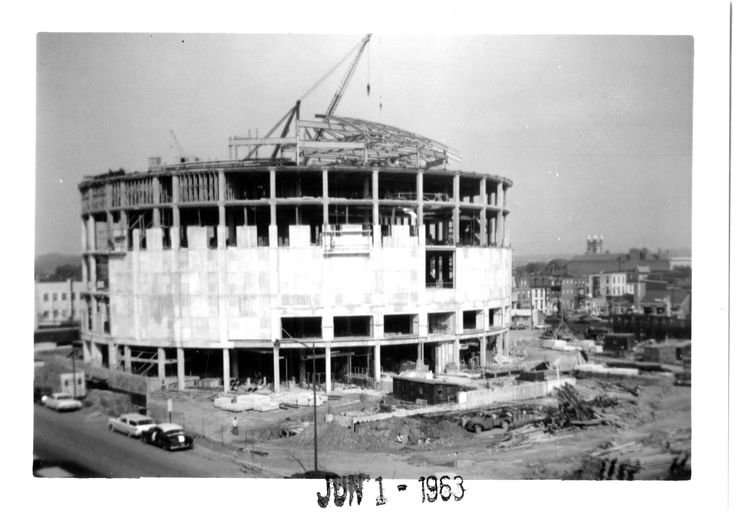 Back at the beginning of the 20th century, the Pennsylvania State Legislature decided to create a state museum that would showcase the unique history and natural world of Pennsylvania and memorialize the life of William Penn.  They then passed, and Governor Pennypacker signed that legislation in 1905.  The collected artifacts found a home in 1907 when the museum set up shop in the Executive Library and Museum Building which was designed by Philadelphia architect John Windrim in a Beaux Arts style.  Initially, it was formed around the Pennsylvania Exhibit from the Louisiana Purchase Exposition of 1904 and was divided into two divisions: Education and Zoology.  The Education Division displayed the works of children from Pennsylvania schools and the Zoology Division displayed over 550 specimens collected by Boyd Rothrock.  The Zoology Division later added the subdivisions of archaeology and geology.

The Museum participated in the Depression Era Works Progress Administration during the 1930s to gain federal support for its fine arts section as it also became a major repository for Pennsylvanian works of art.  During the 1940s it came under the purview of the Pennsylvania Historical and Museum Commission and its home went through major renovations at the same time it was outgrowing that same home.  As a result, the push for a new home began in 1944.  However, those lobbying for a new building would have to wait 20 years to see their goal achieved.

Headed by Executive Director Sylvester Stevens, state funds were finally set aside in 1957 and Governor David Lawrence signed legislation to begin work on the new museum in 1959.  The state hired the architectural firm of Lawrie and Green and ground was broken in 1962.  The new building and current home of the museum features a four-story rotunda that is dedicated to the founder of the state, William Penn, and, for a time, it was known as the William Penn Memorial Museum.  The entrance rotunda displays an 18-foot tall, 3,800-pound bronze statue of Penn created by Janet de Coux.  Located on the periphery of the rotunda are digitized copies of documents significant to Pennsylvania history, to include the original charter given to Penn by Charles II.