The Schiele Museum of Natural History and Planetarium

Founded in 1961, the Schiele Museum of Natural History and Planetarium of Gastonia, N.C., was founded by when Rudolph "Bud" Schiele and other local historians. A naturalist and collector, Schiele's collection of wildlife, photographs, rocks, and minerals were used to found the original Schiele Museum. Schiele passed away in 1974, but his museum and collection have grown substantially. In addition to a number of rotating featured exhibits, the museum offers several permanent galleries that feature animal specimens native to North Carolina, North America, and species that roamed the earth during the prehistoric era. The museum places a special emphasis on the relation between the Native American inhabitants of the region and the natural habitat of North Carolina before and after contact with humans from the "Old World" of Europe, Asia, and Africa. One of the highlights of the museum, the Catawba Indian Village, is open seasonally. There are also numerous outdoor exhibits and a nature trail.

The exterior of the Schiele museum. 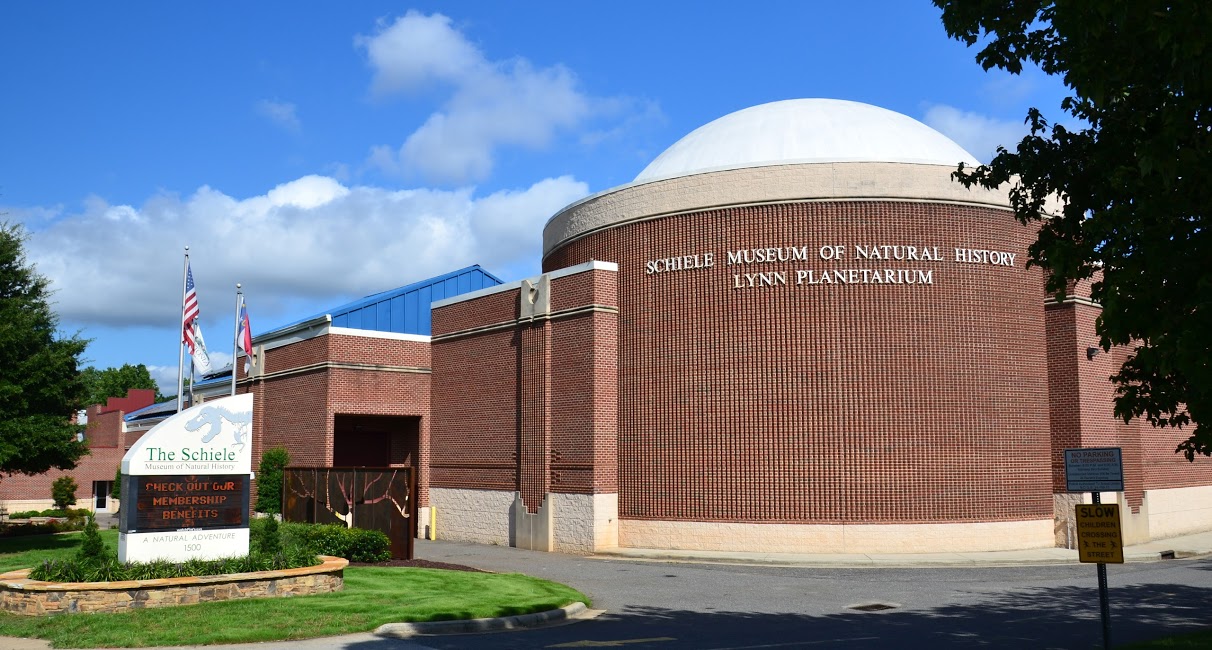 Rudolph "Bud" Schiele, the eventual founder of the Schiele Museum of Natural History, was a naturalist and botanist who devoted his life to his work. Schiele was born in Philadelphia on April 2nd, 1893. At 17, he worked as an apprentice curator at the Philadelphia Commercial Museum, a career path which foreshadowed his later involvement with the Schiele Museum. Schiele worked a number of other jobs throughout his lifetime, serving as a Second Lieutenant in the 87th Division of the United States Army, Scout Executive with the Boy Scouts of America, and eventually a ranger-naturalist for the Great Smoky Mountains National Park.

In 1924, Bud Schiele moved to Gaston County with his wife, Lily Hobbs, who was a naturalist and collector herself. Rudolph would serve on the Piedmont Scout Council of the Boys Scouts of America for the next twenty-four years, before he was forced to leave scouting because of mandatory retirement age limits. While Schiele had always been a naturalist and collector, his time spent in Gastonia led to some of his most valuable collections of wildlife, rocks, minerals, and photographs now on display in the Schiele Museum. Throughout his time spent in Gastonia, Bud Schiele was an advocate for nature preservation, education, and discovery. Before leaving Gastonia to pursue the ranger-naturalist position at the Great Smoky Mountains National Park, Bud Schiele told a group of community leaders that if they could find a place to house them, he would offer all of his collections and services to the city of Gastonia, North Carolina for free.

When the Schieles returned to their Gaston County home, plans were in the works to make Bud Schiele's promise a reality. In 1961, the original Schiele Museum of Natural History was dedicated in honor of its generous founder. Bud Schiele continued to work actively with the museum until his death in 1974. Schiele's great contributions to Gastonia and the state of North Carolina were widely recognized during his lifetime. He was awarded honorary membership at Alpha Phi Omega at UNC-Chapel Hill, was cited by the Gastonia Chamber of Commerce for his outstanding service to the community, and received an honorary doctor of law degree from Belmont Abbey College due to his contributions to the community. Each year, the Schiele Museum observes Founder's Week and Founder's Month in April in commemoration of Bud Schiele's legacy.

The Schiele Museum has five permanent indoor galleries: the Hall of North Carolina Natural History, the Hall of North American Habitats, the Robinson Hall Exhibit Gallery, the Hall of North American Wildlife, and the Henry Hall of the American Indian. The museum also has a number of outdoor exhibits, including a nature trail, memorial wildlife garden, a replica of an authentic Catawba Indian village, a Stone Age heritage site, and an interactive outdoor experience called "The Farm" which gives visitors the opportunity to learn about the history of the ever-changing relationship between humans, plants, and animals in the region. The Farm houses past and present agricultural equipment, has expansive gardens which show a variety of plants and growing techniques, and houses live animals. The Schiele Museum is also home to the James H. Lynn Planetarium and Science Theater, the second largest planetarium in North Carolina. The daily program schedule changes for the Planetarium, as the featured exhibits of the museum do.