The Cape St. George Light is a historic lighthouse built in 1852 on the center of St. George Island. It replaced an earlier one built in 1833 on the western tip of the island. This light guided ships into bay and most of them were headed to Apalachicola which was a thriving cotton shipping port at that time. However, ships coming in from the east could not see the light so a second light, near the where Cape. St. George Light now stands, was built but unfortunately a hurricane destroyed it in 1851. The Cape. St. George Light, built a year later, was constructed with thicker concrete. It was placed on the National Register of Historic Places in 1974.

Visitors can climb to the top of Cape St. George Light. 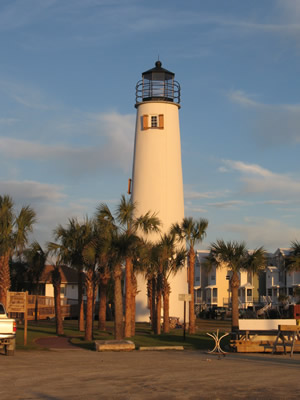 The light was automated in 1949. It withstood many decades of harsh weather until the U.S. Coast Guard deactivated it in 1994, after recent hurricanes had swept away the surrounding sand. It finally toppled in 2005, but was rebuilt in 2008.