Constructed in 1914, Hawthorn Hill was built for the famous Wright brothers, Wilbur and Orville, who invented the airplane. Designed in the Classical Revival style, the home is a physical representation of their wealth and status in aviation history. Sadly, Wilbur died before it was completed, but Orville, their father Milton, and sister, Katherine, lived in the house. During the next few decades, the Wrights hosted the greatest innovators, engineers, and aviation pioneers of the time. These included Thomas Edison, Henry Ford, Charles Lindbergh, Amelia Earhart, and President Franklin D. Roosevelt, among others. For the home’s high status, Orville called Hawthorn the “machine for living.” After Orville’s death in 1948, the Wright family put the home up for sale, and it was soon purchased by Edward Deeds of the National Cash Register Corporation. Since then, Hawthorn Hill has continued to entertain notable visitors and dignitaries from around the world. In 1991, the U.S. Secretary of the Interior designated the home as a National Historic Landmark, and in 2006, the home returned to the Wright family. Nowadays, Hawthorn Hill is a component of the National Aviation Heritage Area. The organization Dayton History, in collaboration with the Wright Family Foundation, offers tours inside the home.

Hawthorn Hill was built in 1914 and is a National Historic Landmark for its association with the Wright Brothers. 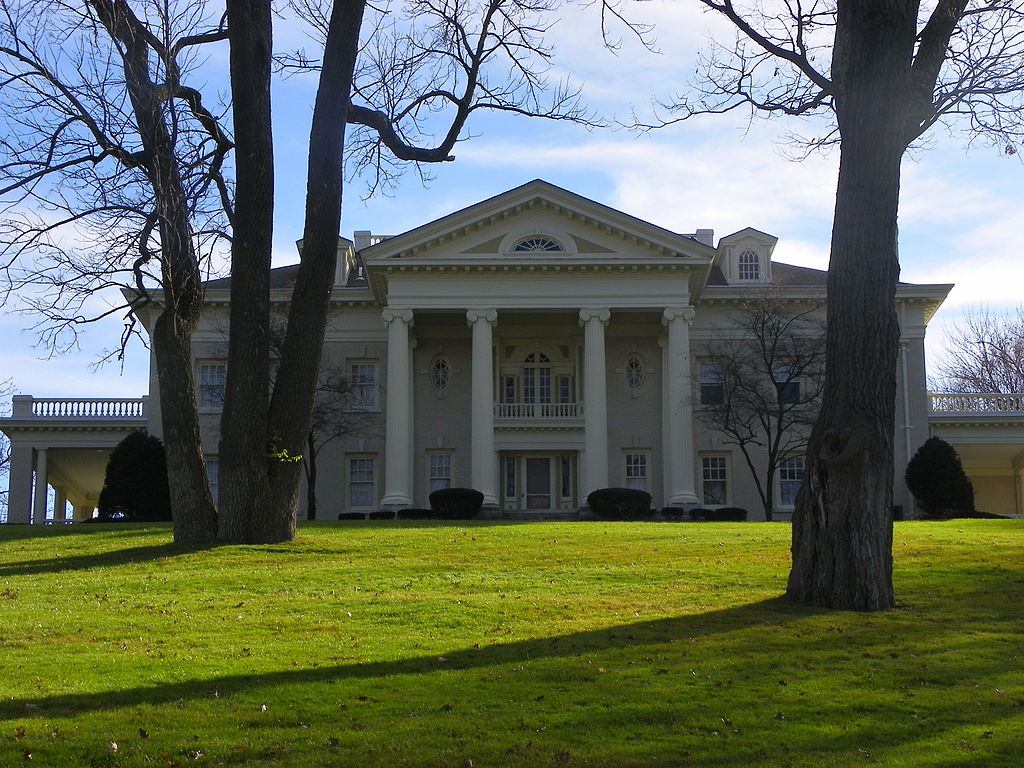 Orville Wright, Major John F. Curry, and Colonel Charles Lindbergh together on June 22, 1927. Courtesy of the Library of Congress. 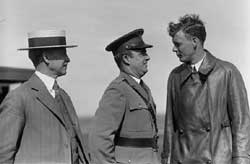 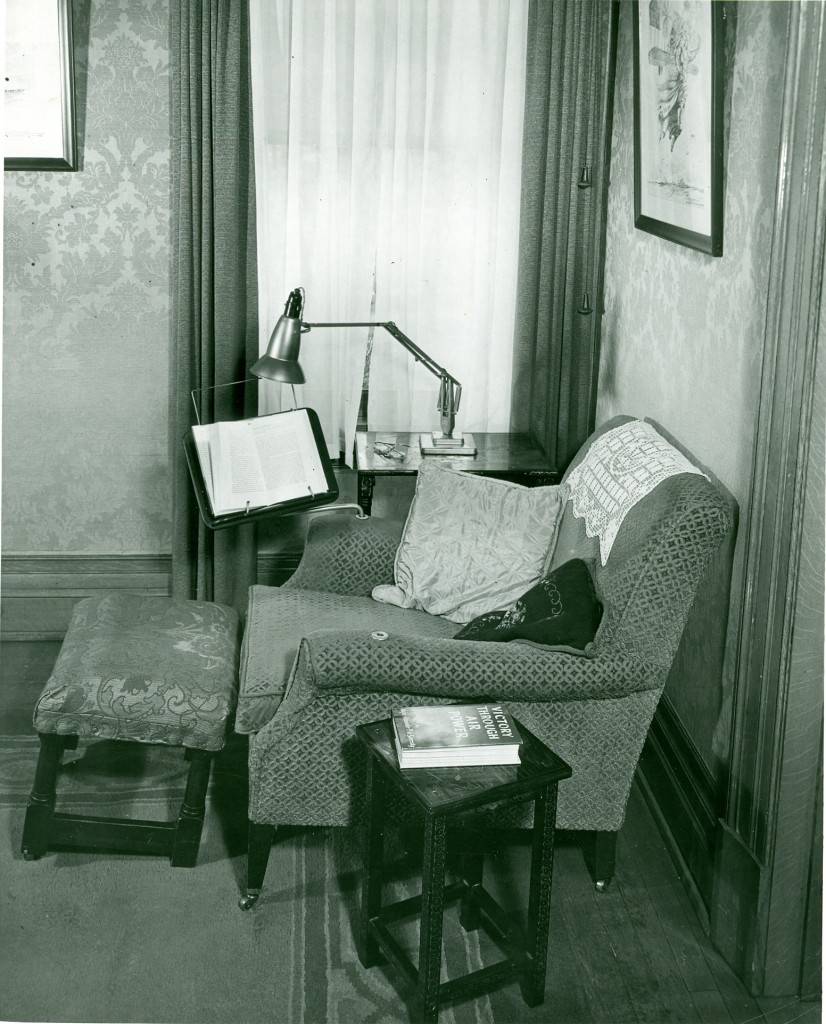 Orville and Katharine Wright on the front porch of Hawthorn Hill. 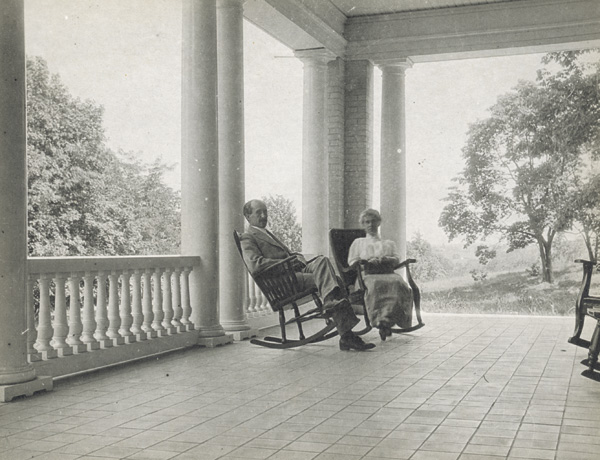 Although the Wright Brothers are largely remembered for their first flights with heavier-than-air flying machines at Kitty Hawk in December 1903, the two brothers established their acclaim and legitimacy as aviation pioneers following their return to their home of Dayton, Ohio. In the decade following the first flight, Wilbur and Orville Wright quelled skepticism through public demonstrations, their factory and testing grounds at Huffman Prairie Field, and their aviation school, the Wright Brothers Flying School at Huffman Prairie (operating from 1910 to 1916). Other successes included their patents and the incorporation of the Wright Company in 1909.

As the Wright’s fame grew, so did their need to build a larger home to better accommodate a growing repertoire of dignified guests. Also, it should be noted, their increased wealth permitted the construction of a more lavish, enjoyable home, compared to the smaller home they lived in at 7 Hawthorn Street in West Dayton. With the consent of their sister, Katharine, the Wright Brothers purchased 17 acres of wooded land named Hawthorn Hill (named after the abundance of hawthorn trees covering the hillside). The Dayton architecture firm, Schenck and Williams, set the plans in motion. Unfortunately, after the final approval of the plans in 1912, Wilbur Orville died of typhoid fever.

Orville dedicated the completion of the home to his late brother and fellow pioneer, and he personally oversaw the construction of the home. It was finally completed in 1914. Orville, Katharine, and their father, Milton Wright, moved in soon after.

Orville’s passion and intelligence for innovation are visible throughout the home. Some notable features came from Orville’s own designs, and they included, but were not limited to, a special system of chains and rods that controlled the furnace from upstairs rooms, an early version of a water softener, a toaster capable of both slicing and browning bread, and a buzzer system connected between the dining room and kitchen.

Having lived from the horse-and-buggy age to the dawn of supersonic flight, Orville died in 1948 following a second heart attack. The Wright family put the home up for sale that year, and the very first day the “For Sale” sign went up, Edward Deeds from the National Cash Register Corporation purchased the home. NCR oversaw meticulous protection and preservation of the home until 2006 when the property returned to the Wright family.1

Orville and Katharine Wright held strong passions for entertaining guests while providing a stimulating, happy home for their broader family. Following their successes, the Wright Brothers were known around the world, and Hawthorn Hill was host to prominent figures such as Thomas Edison, Alexander Graham Bell, Admiral Richard Byrd, King Constantine of Greece, and President Franklin D. Roosevelt. Perhaps one of the most prestigious guests was Charles Lindbergh, who arrived at Hawthorn on June 22, 1927, just weeks after his nonstop flight over the Atlantic. This visit naturally grew a large crowd of Daytonians on the lawns of Hawthorn Hill, and Orville and Charles made an appearance together.

Visitors interested in the history of aviation and industry can tour Hawthorn Hill and catch a glimpse into the mind of Orville Wright. Tours of Hawthorne Hill occur on Wednesdays and Saturdays, and space is limited to no more than 14 visitors per hour.2