On March 18, 2004, construction began for a new baseball field, the Appalachian Power Park. This new field location would replace the previously known Watt Powell Park in Kanawha City. Opening in April 2005, the Power Park became home to the West Virginia Power, a Class A minor league affiliate of the Pittsburgh Pirates. This field hosts many community events in addition to baseball games.

Appalachian Power Park was completed in 2004 and replaced Watt Powell Park as the home of Charleston's professional baseball team. 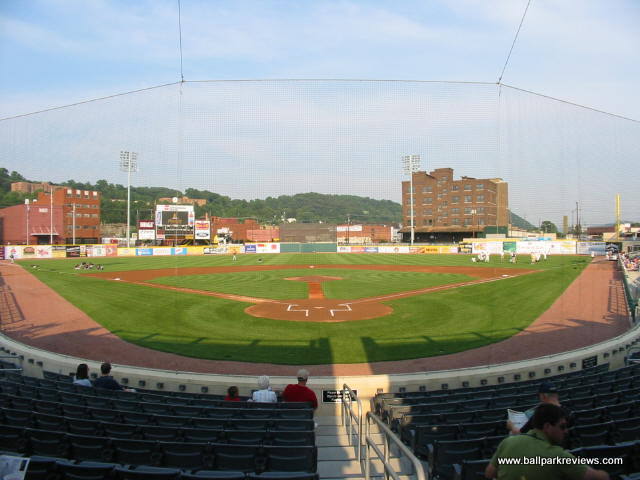 Prior to the Appalachian Power Park was the Watt Powell Park. This is the exterior view of the previous baseball field. 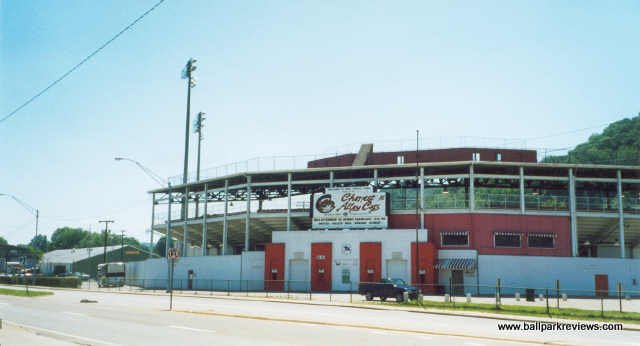 The history of minor league baseball in Charleston begin in 1910. During the same year, the Charleston Statesmen played in the Class D Virginia Valley League and later the Class D Mountain State League in 1911. Their games were played at Wehrle Park in Charleston.1912 was a year where there weren't any baseball played in Charleston. Then in 1913, the original Charleston Statesmen changed their name to the Charleston Senators and played in the Class D Ohio State League for three seasons, also held at Wehrle Park. Again, there was no baseball played in Charleston from 1916 to 1930. Although, that did not mean that there was not baseball-related activity in the Charleston area. A new ballpark was built - Kanawha Park - a 3,500 seat wooden baseball park where the current Appalachian Power Park is now located.
Baseball soon returned to Charleston in 1931 when the Senators began to play in the Class C Mid-Atlantic League as an affiliate of the Cincinnati Reds. Despite a fire that destroyed the stands at Kanawha Park that forced the team to play most of its games on the road, the Senators were able to keep going until 1942. There was no baseball team in the city from 1943 to 1948.The return of the Senators in 1949 coincided with the opening of Watt Powell Park. But this season, they competed in the Class A Central League as a Cincinnati Reds affiliate again. In 1952, Charleston was moved up to the Class AAA American Association.

Given Watt Powell Park's location away from the center of Charleston, and the desire to bring baseball to the downtown area, leaders of the city worked to bring a new stadium to the downtown area in hopes of increasing attendance and promoting economic development in downtown Charleston. The American Appalachian Power electric company purchased the naming rights of the field. Then, construction began on March 18, 2004 in the East End of Charleston. The stadium was designed to offer a seating capacity of 4,500 and the creation of a new stadium was also accompanied by a change in team branding. The Charleston baseball club has been known by many names over the years such as: the Senators, the Indians, the Charlies, the Wheelers, and the Alley Cats, before adopting the new name West Virginia Power.

The city of Charleston officially owns the stadium which opened in 2005 when the team took to the field for the first time as the West Virginia Power. The field cost twenty five million dollars to complete with dimensions of the left field being three hundred thirty feet, center field being four hundred feet, and right field being three hundred and twenty feet. The architect for the project was Howard, Needles, Tammen, and Bergendorff, and the general contractor was BBl Carlton, LLC.

The Appalachian Power Park holds several unique features. It has an authentic locomotive horn that they sound when they open the stadium to the general public. The stadium also features an electrical outlet behind home plate for the locally famous (or infamous) Toast Man. In 2007, a party deck was added near the right field foul pole that accommodates two hundred and fifty people. The party deck features all you can eat hot dogs, nachos, other traditional “baseball foods”, and unlimited drinks. In 2007 the Charleston Baseball Wall of Fame was added behind the home plate press box.

Power Park also hosts the West Virginia state high school baseball championships. Apart from the regular teams that play in the Power Park, it has also been home to West Virginia University, Marshall University, and the University of Charleston baseball programs. West Virginia University played their Big 12 conference games on the field. In 2008, parts of the World’s Strongest Man competition were held at the Appalachian Power Park. The stadium also hosts concerts, boxing matches, charity events, and has shown television coverage of college football games on its scoreboard. In 2012, Stadium Journey Magazine named Appalachian Power Park among the ten best minor league baseball parks in the nation and number fifty eight in its list of one hundred best authentic venues worldwide.