This hill near the Joseph Smith family farm was where Joseph Smith Jr. was led by an angel of God, the Angel Moroni on the night of September 21-22, 1823. Here Smith was shown where a hidden record on gold plates existed that contained the history and teachings of prophets of God in the western Hemisphere and of Christ's appearance to this people after his resurrection and ascension in Israel. The record was hidden by a prophet-general of the Nephite people, the last of his people (the Nephites were one of three civilizations led to the hemisphere and settled-others were Lamanites and Jaredites) about 421 A.D. Smith was not allowed to remove the record and few other objects of these people for 1827 where he was then commanded to protect and translate the record into what is now the Book of Mormon. Visitors can come learn more the hill and the Book of Mormon and climb the hill to a monument placed on the crown of the hill. Annually the Hill Cumorah Pageant is held, where hundreds participate to commemorate the events within the Book of Mormon.

Rendering of Hill Cumorah in 1841 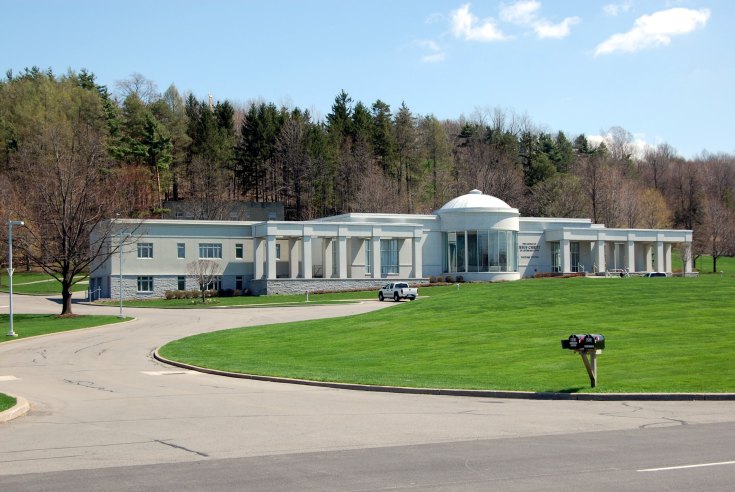 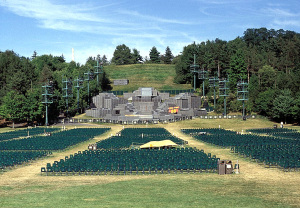 Dedication of Angel Moroni Monument in 1935. President Heber J. Grant is located right-middle. He is in a white suit, dark tie, holding a white hat in left hand. White beard and glasses, he is looking down. 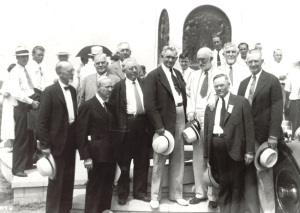 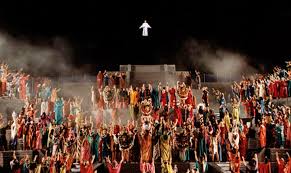 Another angle of Angel Moroni Monument 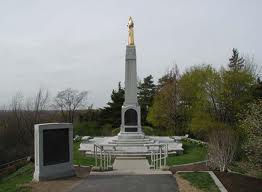 Painting depiciting Moroni about 421 A.D. hiding the gold record and praying to God for its protection until God deems it time to reveal it to the world. 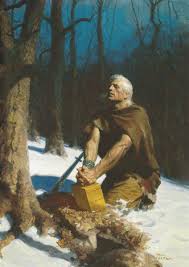 Painting depicting Angel Moroni giving Joseph Smith Jr. instructions in 1827 when the latter was allowed to obtain and then translate the record. 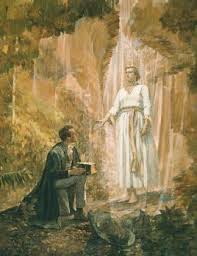 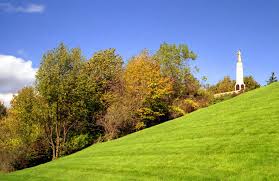 "After the fall of the Nephite civilization, the Prophet Moroni hid up a record in the Hill Cumorah of his people written on plates to come forth “as one crying from the dust” more than 1400 years later, the Book of Mormon was translated and published.1

On the night of September 21-22, 1823, the angel Moroni appeared in vision to young Joseph Smith, Jr. and told him that:

'There was a book deposited, written upon gold plates, giving an account of the former inhabitants of this continent, and the source from whence they sprang. He also said that the fulness of the everlasting Gospel was contained in it, as delivered by the Savior to the ancient inhabitants;

Also, that there were two stones in silver bows-and these stones, fastened to a breastplate, constituted what is called the Urim and Thummim-deposited with the plates; and the possession and use of these stones were what constituted “seers” in ancient or former times; and that God had prepared them for the purpose of translating the book. 2'

Oliver Cowdery wrote a description of the hill in a letter to W. W. Phelps which was published in the Messenger and Advocate in October of 1835:

'The hill of which I have been speaking, at the time mentioned, presented a varied appearance: the north end rose suddenly from the plain, forming a promontory without timber, but covered with grass. As you passed to the south you soon came to scattering timber, the surface having been cleared by art or by wind; and a short distance further left, you are surrounded with the common forest of the country. It is necessary to observe, that even the part cleared was only occupied for pasturage, its steep ascent and narrow summit not admitting the plow of the husbandman, with any degree of ease or profit. It was at the second mentioned place where the record was found to be deposited, on the west side of the hill, not far from the top down its side; and when myself visited the place in the year 1830, there were several trees standing: enough to cause a shade in summer, but not so much as to prevent the surface being covered with grass which was also the case when the record was first found.

Whatever may be the feeling of men on the reflection of past acts which have been performed on certain portions or spots of this earth, I know not, neither does it add or diminish to nor from the reality of my subject. When Moses heard the voice of god, at the foot of Horeb, out of the burning bush, he was commanded to take his shoes off his feet, for the ground on which he stood was holy. The same may be observed when Joshua beheld the ‘Captain of the Lord’s host’ by Jerico.-And I confess that my mind was filled with many reflections; and though I did not then loose my shoe, yet with gratitude to God did I offer up the sacrifice of my heart.' 3

Joseph visited the location of the plates on September 22 for each of the next four years after Moroni’s initial appearance, where he received instruction from Moroni and eventually received the plates in 1827. After the translation of the Book of Mormon was completed, Joseph returned the plates to Moroni. An account of the event was given by Brigham Young.

A monument of the Angel Moroni was erected at the Hill Cumorah and was dedicated by President Heber J. Grant.

The Church of Jesus Christ of Latter-day Saints has hosted the Hill Cumorah Pageant: “America’s Witness for Christ” near the Hill Cumorah since 1937. It is performed by volunteers and portrays Lehi and his family leaving Jerusalem in 600 B.C. being guided to what is now the American continent."

KEY EVENTS OF THE HILL CUMORAH: