One of the LDS church's smaller temples, the Laie Temple however, is one of the church's most historic and famous. Dedicated first in 1915 as part of the temple was made ready for use by locals and people coming afar from islands of the Pacific and later in 1919 the whole temple was dedicated. This was the first temple to be constructed outside the continental United States, the fifth constructed by the church, thus one of the oldest temples in continual operation outside of Utah. The temple located both near the LDS-operated campus, BYU-Hawaii and church-run and internationally famous Polynesian Cultural Center. This was the first temple for Hawaii, a second one later constructed in the big island called Hawaii in the city of Kona. There is a visitor center available for the general public.

Photo of temple taken from Japanese plane during attack on Pearl Harbor, Dec. 7, 1941 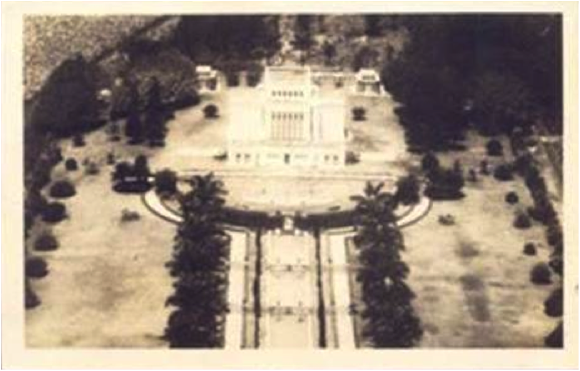 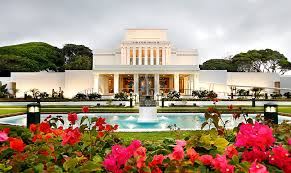 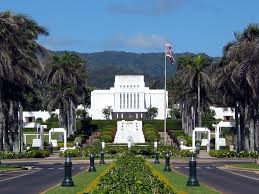 View of temple and some of its grounds from entrance. 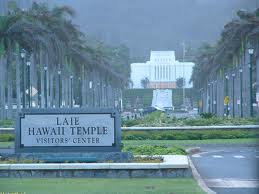 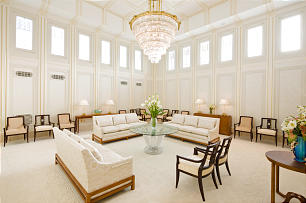 Crowds gather for temple dedication in 1919. 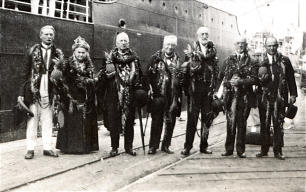 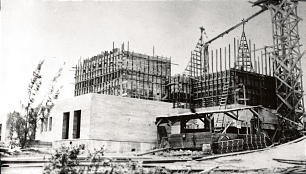 A rock crusher was used to prepare lava, limestone and coral to make cement for building the Laie temple. 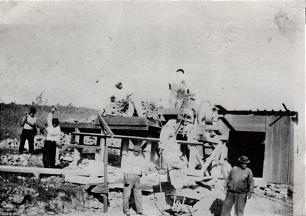 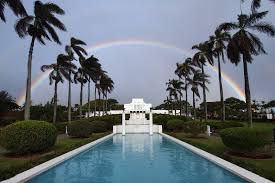 Laie Hawaii Temple is a temple of The Church of Jesus Christ of Latter-day Saints located on the northeast shore of the Hawaiian island of Oʻahu. The temple sits on a small hill, a half-mile from the Pacific Ocean, in the town of Lāʻie, 35 miles from Honolulu. Along with Brigham Young University–Hawaii and the Polynesian Cultural Center, the Laie Hawaii Temple plays an important role in the town of Lā'ie, with the Visitors' Center attracting more than 100,000 people annually.

In addition to initial building and construction, the temple has been dedicated for use by several presidents of the LDS Church. The temple site was dedicated by Joseph F. Smith on June 1, 1915, with Heber J. Grant dedicating the completed structure on November 27, 1919. Spencer W. Kimball rededicated the Temple after significant expansion on June 13, 1978. After seismic upgrades and remodeling, Thomas S. Monson rededicated the Temple on November 21, 2010.

In 1865, the Church purchased a 6,000-acre sugarcane plantation as a gathering place for the Latter-day Saints in the area. While on a mission to the Sandwich Islands, Joseph F. Smith first proposed building a temple in Hawaii during a meeting in Lāʻie on February 15, 1885. George Q. Cannon, one of the original ten missionaries, visited Lāʻie in 1900 and became revered as a prophet for promoting the idea of a new Hawaiian temple among his congregations.

In 1915, Joseph F. Smith, then sixth president of the LDS Church, announced plans for the first temple outside the continental United States and chose Lāʻie for its construction. According to Mormon folklore, precious materials arrived just in time to complete the building of the temple: Temple builders ran out of wood (a scarce commodity on the islands) during initial construction, but local members received lumber when a ship ran aground and needed to unload some of its cargo of wood. The temple builders volunteered to help the ship and were given the lumber out of gratitude. The lumber taken from the ship proved to be just enough to finish the temple.

When news of the new Laie Hawaii Temple reached Native Hawaiian converts (and other Polynesians) living far from home in the town of Iosepa, Utah, many decided to emigrate back to Hawaii. Although the Hawaiians had lived in Iosepa since 1889, the closest temple, Salt Lake Temple, was 75 miles away from the colony. Moving to Laie gave the Hawaiians the ability to be closer to the new temple and allowed them to perform sacred ordinances without having to travel great distances. By January 1917, most of the Hawaiians returned home, leaving Iosepa a ghost town.

LDS Church President Heber J. Grant presided over the Hawaiian Temple's dedication on November 27, 1919. Grant called the Hawaiian people "descendants of Lehi" (a prophet in the Book of Mormon), and saw the future of the new temple in Lāʻie as a magnet for Polynesian converts. After the temple was completed, more Polynesians moved to Lāʻie, hoping to participate in temple ordinances. Tourists were also drawn to the area, and guide books of the time compared the Lāʻie temple to the Taj Mahal.

The 1941 attack on Pearl Harbor gave rise to another popular tale about the Laie Hawaii Temple in Mormon folklore. According to variations on this story, Japanese aircraft pilots attempted to bomb or strafe the Hawaiian Temple just prior to, or just after, the attack, but were thwarted by mechanical failure or from an unseen protective force. Some stories suggest that the Japanese pilot who attempted to attack the temple was converted to the LDS Church after he saw a picture of the temple in the possession of Mormon missionaries in Japan. Although there is an eyewitness who believes he saw the attempted bombing and a former missionary who says he met the Japanese convert, historians have found little supporting evidence that would substantiate these stories.

Beginning in May 1976, the temple was closed for a two-year remodeling project, expanding from 10,500 square feet to over 47,000 square feet. Church president Spencer W. Kimball rededicated the temple on June 13, 1978.

A $5.5 million renovation, renewal, and beautification project along Hale Laʻa Boulevard leading to the temple began in 2003, lasting 14 months. Norfolk pines suffering from termite infestation were replaced with royal palms, new decorative lighting was added to the terraces, and landscaped roundabouts were put in place. At the same time, the Visitors' Center was upgraded with interactive kiosks and new displays.

In December 2008, the Laie Hawaii Temple closed again for structural and seismic upgrades and to restore the ordinance rooms to their original appearance and progressive-style presentation of the endowment (still using film). The baptistry was repaired and renovated. The temple was rededicated on November 21, 2010, by Thomas S. Monson.

LDS Church president Joseph F. Smith wanted the architecture of the Laie Hawaii Temple to resemble Solomon's Temple referred to in the biblical canon. The temple is often compared to the Cardston Alberta Temple, designed by young architects Hyrum Pope and Harold W. Burton. Pope and Burton's design was also used for Laie, and their work is rooted in the Prairie style architecture made popular by architect Frank Lloyd Wright in the early twentieth-century. The temples also evoke Mesoamerican architectural motifs, a favored theme of Burton's.

The temple sits on an 11-acre (4.5 ha) site that was once part of a large sugarcane plantation. Construction of the temple first began in February 1916. Native materials consisting of crushed lava rock were used to build the temple, along with reinforced concrete. The building's gleaming white finish was created using pneumatic stone-cutting techniques. The temple has the shape of a cross when seen from the air; the highest point of the temple is 50 ft, and it measures 102 ft from east to west and 78 ft (23.8 m) from north to south. The front exterior was designed in the form of a Greek cross, but lacks a tower, a rarity in LDS Church temples. Apart from the Laie Hawaii Temple, only two other church temples lack towers or spires: the Cardston Alberta Temple and the Mesa Arizona Temple.

The exterior of the temple exhibits four large friezes planned by American sculptor J. Leo Fairbanks and built with the help of his brother Avard Fairbanks. Modeled four-fifths lifesize and cast in concrete, the bas-relief friezes depict God’s dealings with Man. The north frieze depicts the story of the Book of Mormon. The west frieze shows the people of the Old Testament. The New Testament and the Apostasy are depicted on the southern frieze of the temple, and the restoration of the Church through Joseph Smith is shown on the east frieze. On the grounds of the temple are statues also designed by the Fairbanks brothers including Joseph being blessed by his father and one of the Prophet Lehi in a scene from the Second Book of Nephi in the Book of Mormon.

As visitors approach the temple and pass a number of reflecting pools, a maternity fountain sits in front of the uppermost pool. Designed by the Fairbanks brothers, this bold relief honors Hawaiian Motherhood and depicts a Hawaiian mother holding a giant clam shell while pouring water over her children. The act is supposed to symbolize mothers pouring their love, hope and care onto their children.

The landscaped temple grounds contain tropical gardens, with plants such as hibiscus, Brazilian plume, birds of paradise, lantana, red ginger, bougainvillea, plumeria, Ixora, and others. At the base of the temple grounds is a fountain separating an LDS Family History Center and a Visitors' Center, where a ten-foot sculpture replica of Bertel Thorvaldsen's Christus stands inside the entrance.

The Laie Hawaii Temple is 47,224 square feet and houses four ordinance rooms and six sealing rooms. Landscape artist LeConte Stewart designed many of the murals found inside the temple.

Laie Hawaii Temple is not used for regular Sunday worship. As temples are considered sacred houses of the Lord, only church members who keep gospel covenants are allowed to enter for the purpose of participating in sacred ceremonies such as endowments, baptism for the dead and eternal marriage, a ritual in which couples and families are sealed for time and all eternity. Because of these guidelines, non-Mormons are not allowed inside temples, but public tours of the grounds outside and of the visitors' centers are available.