The Marine Barracks Washington is the oldest active post in the Marine Corps. It was established in 1801 by President Thomas Jefferson and Lt. Col. William Ward Burrows. It is sometimes known as “8th & I” and also as the “Oldest Post in the Corps.” It was the Marine Corps headquarters from 1801 to 1901. Today is supports both ceremonial and security missions in Washington D.C.

The Marine Barracks Washington is the oldest post in the Marine Corps. It is also the site of the Home of the Commandants. 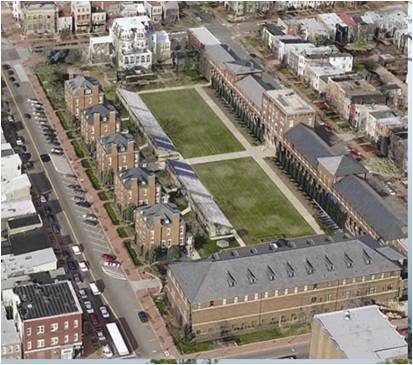 The site of the Barracks was chosen because of its distance to the Navy Yard and the Capitol. Most of the Barracks were rebuilt in the early 1900s. However, the basic layout hasn’t changed much over time. The south and east side continue to be used for offices, maintenance facilities and living space. Officers’ quarters remain on the west side with the Home of the Commandants on the north side. The Home is the only original building remaining and is the oldest public building in continuous use in Washington D.C. with the exception of the White House.