For a couple weeks in 1661, Judges Cave in West Rock Ridge was the hiding place for two fugitive English judges who were sentenced to execution for their role in King Charles I’s beheading. Edward Whalley and William Goffe, the two fugitives who took refuge in New Haven and Judges Cave, were among the 59 members of English Parliament who, in 1649, signed the warrant condemning the King to death. In 1660, 11 years after the Kings death, the monarchy was restored and King Charles II called for the arrest and subsequent execution of those who had sentenced his father to death. That year, 3 of the 59 judges escaped England to find refuge in the puritan colonies in America and, for a while, they were received kindly in Boston. Whalley and Goffe later fled Boston to New Haven CT, where they stayed with Puritan Reverend John Davenport. Ultimately, word of their arrest arrived in New Haven and the two men fled to the wilderness, hiding in the rock formation in modern-day West Rock. Today that rock formation is known as Judges Cave. This historical site stands as an honorary tribute to the fugitive judges as well as the role that New Haven played in hiding them. 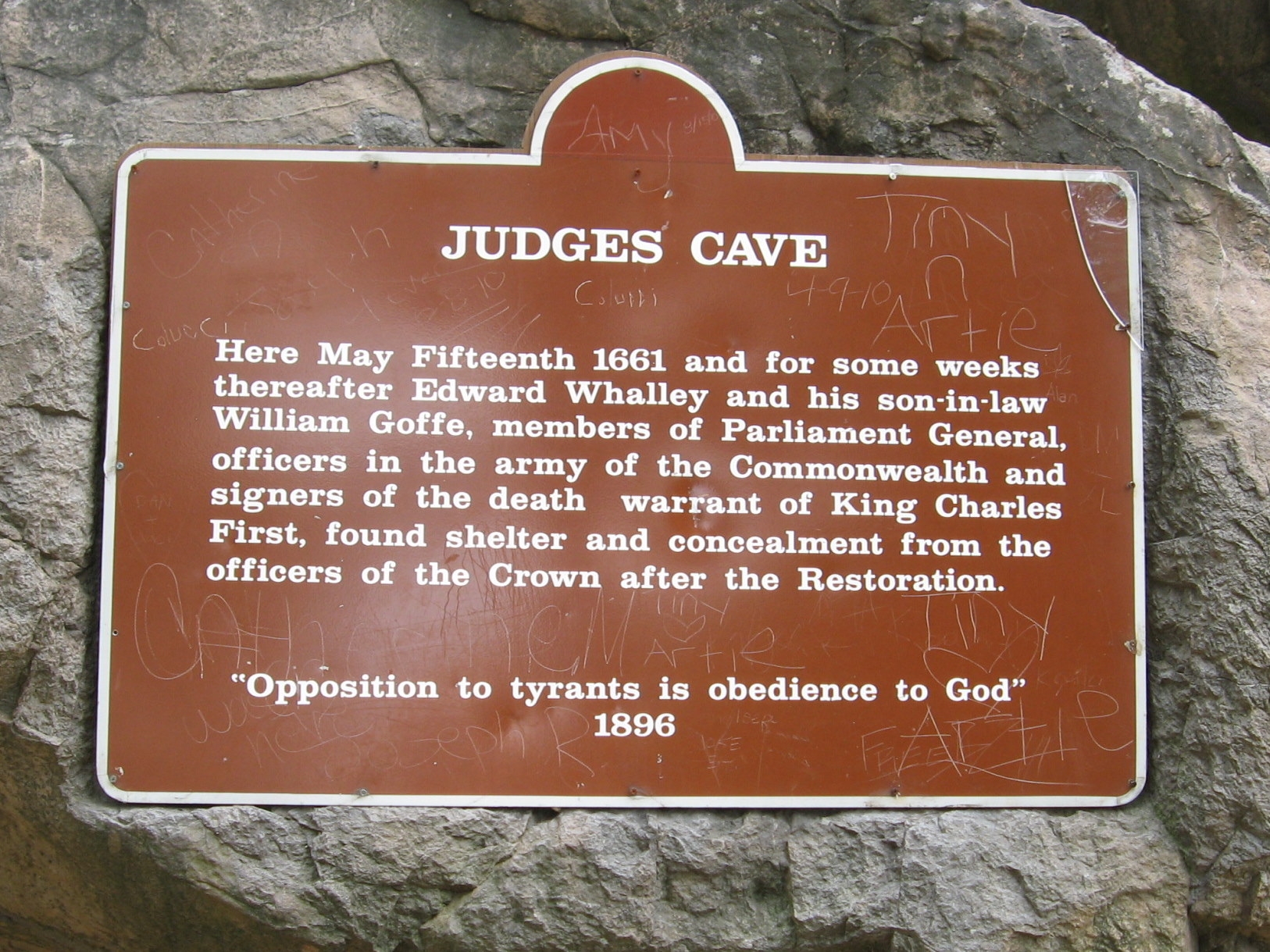 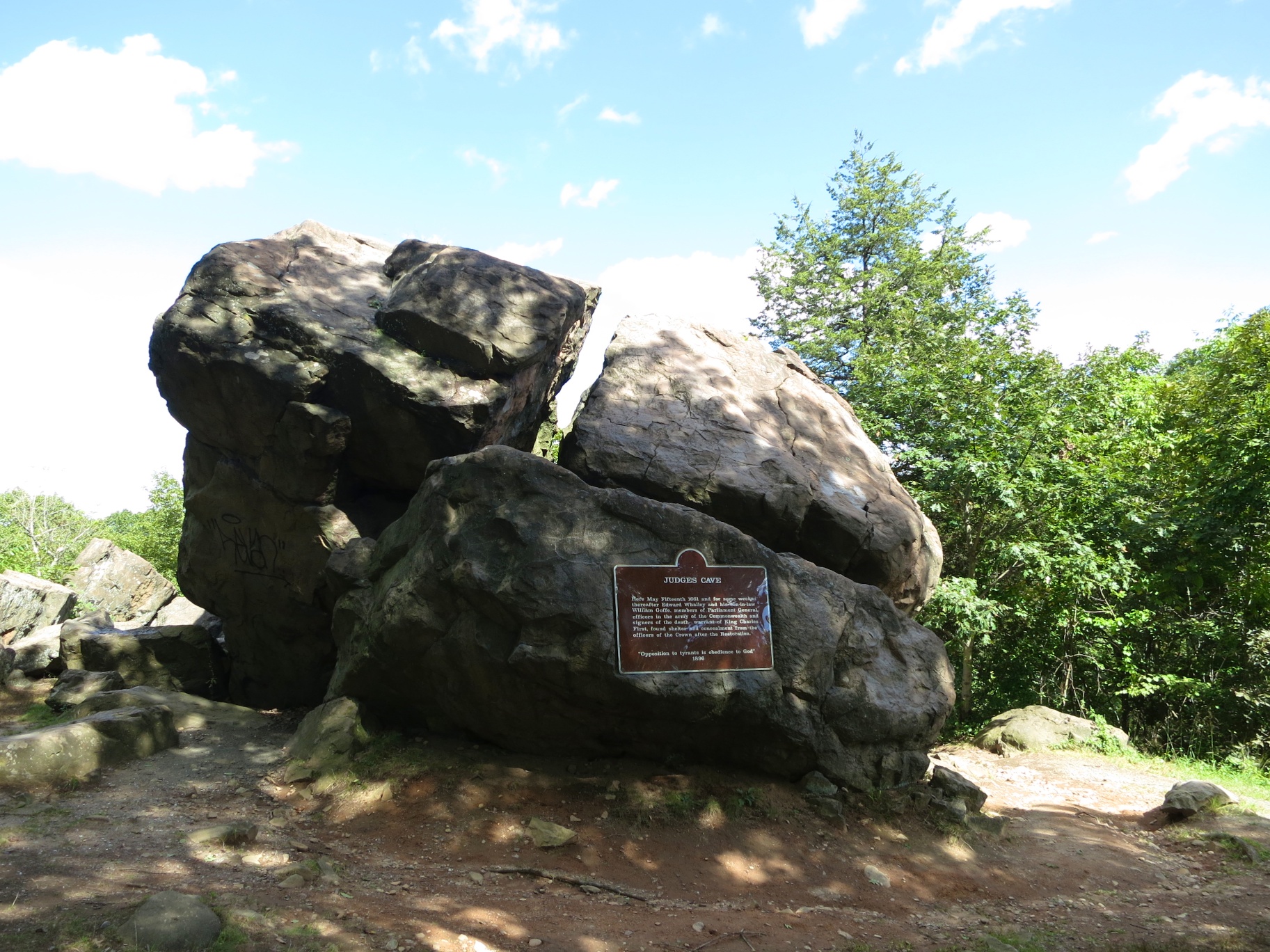 Depiction of the Judges in hiding at the rock formation 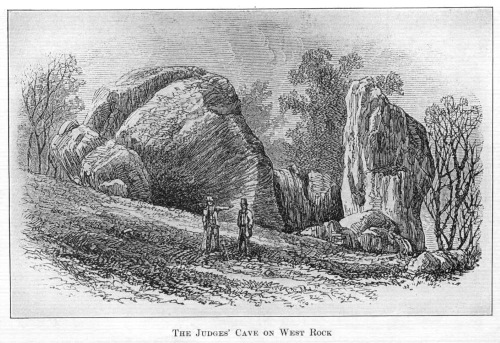 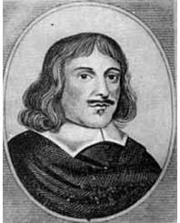 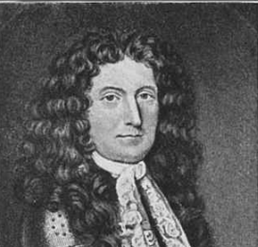 Troubles for King Charles I of England began when he ascended to the throne in 1625; however, it wasn’t until his loss in the English Civil War that King Charles I was charged with high treason by Parliamentary forces under Oliver Cromwell. Following the charge, an ad hoc tribunal was held. Of the 76 judges who actually sat on the tribunal, there were 59 who ordered the King’s execution in 1649. King Charles I was beheaded that year; Cromwell became Lord Protectorate; and the King's son, Charles II, went into exile.

Upon Cromwell’s death, the monarchy was restored and Charles II took the throne in 1660. Angered by his father’s death, King Charles II began hunting down and executing those who signed his father’s death warrant. Even Cromwell’s corpse was exhumed and symbolically executed. As this was happening, several regicides were able to escape Charles II’s wrath. Three of them fled to the United States, including John Dixwell, William Goffe, and Edward Whalley. Originally, Goffe and Whalley settled in Boston, where they were well-received, but they were soon forced to move due to fear of Royal informants and official orders for their arrest. The regicides sought safety in New Haven and joined up with John Dixwell, who had already been living there under a false name.

In England, it was widely believed that Dixwell had died. Goffe and Whalley, however, remained fugitives, and so the men hid with Puritan Reverend John Davenport. “Hide the outcasts, bewray not him that wander-eth,” Davenport preached to his congregation. Orders for the judges' arrest came to New Haven in the spring of 1661. With the help of local residents, the judges went into hiding at modern-day West Rock, spending a month living at “Judges Cave” (a name attributed to the rock formation much later). Nearby friends brought them food, but Goffe and Whalley were forced out of the cave a month after arriving because of a confrontation with a panther at its entrance.

Dixwell lived in New Haven for the rest of his life in tranquility; he is buried in the courtyard of the Center Church alongside the New Haven Green. Goffe and Whalley retreated to the frontier wilderness near Hadwell, Massachusetts, and the details surrounding their deaths and later whereabouts remain a mystery. Today, New Haven honors the memory of the three regicide judges by naming several major thoroughfares after them, including Dixwell Avenue, Whalley Avenue, and Goffe Street. Hiking up Regicide Trail in West Rock Ridge, visitors can find Judges Cave and the historical marker there.1

Inscription on the Historical Marker

Here May Fifteenth 1661 and for some weeks thereafter Edward Whalley and his son-in-law William Goffe, members of the Parliament General, officers in the army of the Commonwealth and signers of the death warrant of King Charles First, found shelter and concealment from the officers of the Crown after the Restoration.

"Opposition to tyrants is obedience to God"