The statue honors Louisiana veterans of the Spanish American War and was dedicated in on May 30, 1939. The statue was originally located at the intersection of North Claiborne and Canal Street. Today, the eight-foot-tall bronze statue sits atop a granite base at the intersection of Poydras Street and Loyola Avenue. To learn more about America's "Forgotten War," please explore the links below.

Designed with a statue depicting an American "doughboy" soldier, the city of New Orleans dedicated this Spanish American War Memorial in 1939. 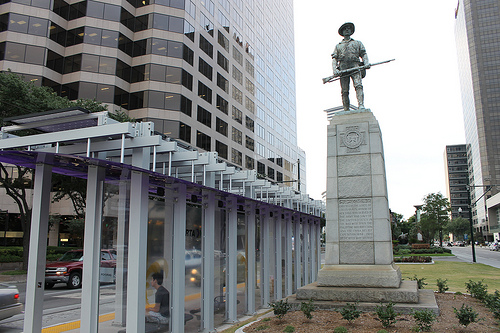 This statue was created by the Gorham Manufacturing Company of Providence.
The monument does more than pay homage to those who fought in the Spanish-American War, it stands as a reminder of a time when the U.S. truly showed it was a world power with global interests.
From the late 1860s and throughout the 1870s, Cubans fought for autonomy from Spain. Though they signed a treaty with Spain by 1878, Spain never truly honored it.  José Martí, known as "El Apóstol," established the Cuban Revolutionary Party on January 5, 1892 in the United States and then returned to Cuba in the mid-1890s to lead the charge for Cubans to pick up arms against its Spanish imperial power. In doing so, he was killed on May 19, 1895.
By that time the U.S. had invested heavily in Cuba’s sugar industry, including more than $50 million invested in Cuban land, and far more than that when looking at the trade between the two countries. Despite this economic tie and growing American sentiment to go to war, President Grover Cleveland proclaimed neutrality on June 12, 1895. However, when the Spanish began to relocate population inland where troops could better guard them, Americans balked. By December 7, President Cleveland reversed his stance, warning Spain that Americans would intervene if the Spanish did not solve the Cuban crisis.
Later, President William McKinley, who was inaugurated March, 1897, furthered the country towards war. In January of 1898, the President and his Sec. of Navy, Teddy Roosevelt, sent the U.S.S Maine to Key West, and then to Havana. Under the guise of friendly visit, permitted by international law, but really it was a show of “we are here.”  The American-built U.S.S Maine was a new type of ship, built of steel and fueled by coal - a modernized warship and meant to impress. The ship on January 25th and was guided into port by the Spanish, where they met with Navy officers.
While the U.S.S. Maine was parked in the harbor, the New York Journal published a copy of a letter from Spanish Foreign Minister Enrique Dupuy de Lôme criticizing the American President as being weak.  This further angered Americans. And then, the U.S.S. Maine - whose crew had been weary of mines, exploded on February 15th while in harbor. Yellow journalism prevalent of that area perpetuated a story that the Maine exploded by mines, but no evidence points to that being true.  Nonetheless, on March 9, Congress signed into law a bill that provided $50 million dollars in military spending. By April 21 President McKinley ordered a blockade of Cuba follwed four days later by a declaration of war. A common phrase uttered during the war included, “Remember the Maine.”
The war against Spain may have involved Cuba as its main ingredient, but the U.S. also fought Spain (and locals -- a complicated war)  in the Philippines. Indeed, as early as 1896, William Warren Kimball, a U.S. Naval intelligence officer, introduced a plan that strove to free Cuba through naval force involving a blockade, attacks on Manila, and attacks on the Spanish Mediterranean coast.
This two-hemisphere war arguably pushed America to the center stage as a world power. A country founded in opposition to imperialism had defeated a European power -- Spain -- in nearby Cuba, as well as far away in the Philippines. Though, the building blocks for this move to world power began much earlier, such as when the U.S. arrived in Japan in the early 1950s with its “Black ships.” Thus, the U.S. moved into the 20th Century grappling with its new role as an imperial, world power.

About the monument: In 1921, the company purchased the rights to "The Hiker," a statue designed by artist Theo Alice Ruggles Kitson that was originally designed to honor veterans from the University of Minnesota. Sensing the desire to memorialize veterans of this war, and other foreign deployments of the era, the company cast over forty statues using this same design.

Library of Congress, Hispanic Division, "The World of 1898," https://www.loc.gov/rr/hispanic/1898/index.html