Built in 1905, this is one of California’s only turn-of-the-century pavilions that has survived to the present-day. The Pavilion was built by the Newport Bay Investment Company to enhance the development of Balboa. When the rail line opened on July 4, 1906, nearly one thousand beach-goers took the one-hour train ride on the red cars from Los Angeles to enjoy the beach, Pavilion and pier. The Newport Investment Company’s plan worked as they were soon able to sell lots. According to one source, the company recouped their original $15,000 investment within the first year as they were able to sell land that had previously been completely vacant. The Pavilion is listed on the National Register of Historic Places and is also a California State Historic Landmark.

Balboa Pavillion is the most recognized landmark in Newport Beach 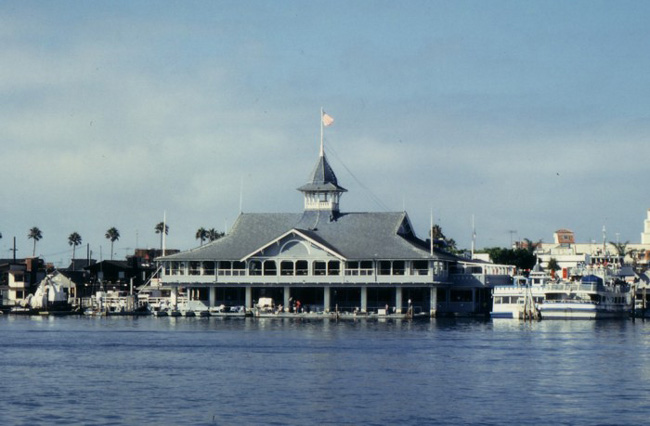 The Pavilion in the early 1900s 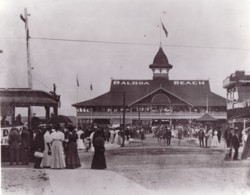 The Newport Bay Investment Company was founded in the early 1900s, with the goal of developing what was then swampland into prime real estate. In 1905 the Washington War Department gave permission to the Company to construct a boat-house, bathhouse, and pavilion on Newport Beach. Architect Chris McNeil was commissioned to design the pavilion, a structure anchored by deep foundations to a narrow sand spit on the waterfront. Construction finished in 1906, and the Pavilion opened along with a hotel and the Pacific Electric Red Car Line, connecting the beach to the people of Los Angeles. This resulted in a property boom in Newport, driven largely according to the strategy of the Newport Bay Investment Company.

People flocked to Newport, attracted by the wide variety of seaside activities on offer. The pavilion initially offered changing rooms in a simple bathhouse, but within ten years had grown to include a post office and barber. Beauty parades were held each summer, and a thriving boat rental business grew. Sightseeing excursions were offered aboard speedboats by the late 1920s. Patrons could also play card games in the upper floors, and in 1942 a ten lane bowling alley, archery range and five pool tables were installed in the building.

The Pavilion was particularly famous for its dance and music scene. In 1923 the building was remodeled to facilitate a dance floor, and during the 1930s innumerable of Big Band performances took place there. Some of the most acclaimed bandleaders that played there include Count Basie, the “king of swing” Benny Goodman, and Phil Harris. A distinctly local style of dance developed, known as the “Balboa Hop” or “Balboa Shuffle”, which gained popularity across the country.

Towards the end of the 1950s ownership of the Balboa Pavilion transferred to the Gronsky family, who refashioned it to be a prime location for sports fishing. They operated a shell museum in the upper floors, the collection of which can now be found in the Bowers Museum, Santa Ana. In 1961 the Pavilion was sold to the Ducommun Realty Company of Los Angeles, and over the next decade it housed the Newport Harbor Art Museum. Ownership of the Pavilion has changed many times since then, but it remains one of the country’s finest reminders of the booming beachside recreational period of the 1920s and 1930s.