This statue of Washington's third governor was completed thanks to the donations of pennies and nickels from residents after John Rankin Rogers died in office on December 26, 1901. Rankin won election to the governor's office in 1896 as a member of the Populist Party and was known for his support of measure to help elevated the condition of workers and their families.

This statue was dedicated in 1905, four years after Rogers died in office from pneumonia. 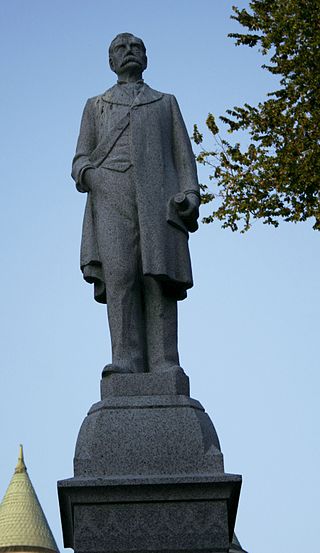 The statue is located next to the former state capitol within the center of Sylvester Park. 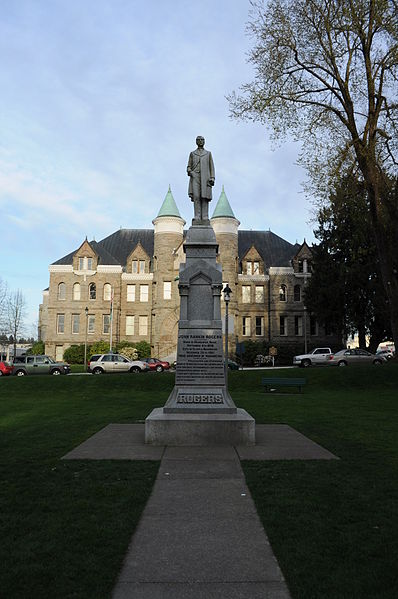 The statue includes the following quote from the late governor that residents believed was representative of the former governor: "I would make it impossible for the covetous and avaricious to utterly impoverish the poor. The rich can take care of themselves." Rogers is best known for his support of the "Barefoot Schoolboy Act" which provided state funds to equalize school budgets for small and impoverished counties.

John Rankin Rogers moved west as a young man, eventually settling in Kansas in 1876. A farmer of great ambition, he became an early organizer of the Farmers' Alliance, an organization that sought to help farmers work together both economically and politically to improve their condition. Rogers would rise to moderate fame within his circle of like-minded farmers when he became the editor of Wichita's Kansas Commoner. Rogers became a leading voice in the People's Party-a coalition of farmers and others who sought to use the power of the government to assist the productive farmers and workers.

Rogers had previously worked in drug stores and in 1890, he moved to Puyallup Washington and started a drug store. He also became an early leader of Washington's Populist Party. He was elected to the state legislature in 1895 and became famous within the state after proposing and securing the passage of the "Barefoot Schoolboy Bill." The new law created a fund that transferred funds from relatively well-off urban school districts to isolated rural schools with a smaller tax basis.

The following year, Rogers won election to the office of governor-the only Populist governor in the state's history. The populists generated support for many of their policies within the Democratic Party. Recognizing that they needed to merge with the Democrats rather than compete with them in elections, Rogers and others merged with the Democrats and won re-election in 1900. He died shortly after his re-election, leading many in the state to support a movement to create this monument in his honor.

History of Public and Higher Education
Political and Diplomatic History