Camp Hancock State Historic Site is located on the grounds of what was once a U.S. Army installation from 1872-1894. It was an infantry post (and originally called Camp Greeley) until 1877 and then became a supply depot for other forts in the region such as Fort Abraham Lincoln. The site features three attractions: a two-story, wood-frame structure that is the oldest building in the city, a 1909 Northern Pacific Locomotive, and the historic Bread of Life Church, which was built in 1880 and originally called St. George Episcopal Church. Inside the two-story building, which was originally the quartermaster/officer's house, is a permanent exhibit called "The Four Seasons at Camp Hancock," which explores the site's history. Given the site's historical significance, it was added to the National Register of Historic Places in 1972. It is managed by the State Historical Society of North Dakota as one of 57 state historic sites.

This postcard shows what the site looked like when it operated as a weather station. 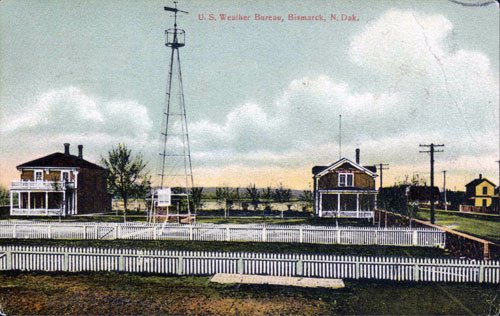 The camp was established to protect the construction of the Northern Pacific Railway as it passed beyond Bismarck. The security of having troops to protect the area also helped the city grow. In 1894, the Army no longer needed the fort and transferred ownership to the Department of Agriculture, which owned it until 1940. During that period, the two-story building was renovated from its original purpose as a quartermaster/officer's quarters into a U.S. Weather Bureau Station. From 1940-1949, the U.S. Soil Conservation Service took over the building and site. The State Historical Society of North Dakota acquired the building and this portion of the former camp site in 1951 and has remained in charge ever since.