Percival Park sits on what was once the main landing for a wide variety of steamships and ferries, known collectively as the Mosquito Fleet. The fleet was named, according to legend, by an office worker in Seattle, who looked out the window and remarked at how the horde of paddle boats and steamships resembled a swarm of mosquitoes. These ships helped to transport people, lumber, and other goods. They went up and down Puget Sound, connecting the great sailing ships of the Pacific Coast to the wharf which was located here and owned by the Percival family. Today, the former wharf has been turned into Percival Landing Park, a public park and maritime recreation area. 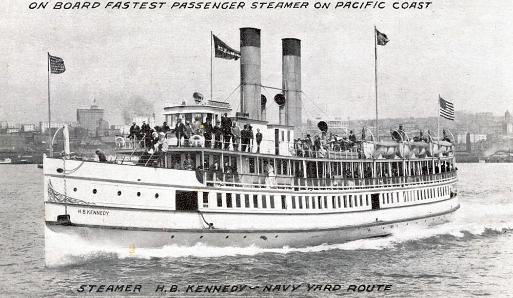 A number of boats from the Mosquito fleet at dock.

When settlers began arriving throughout present-day Olympia in the 1850s, there were few roads aside from a few dirt roads and carriage paths. Given the difficulty of overland transportation, access to the Pacific became one of the most important issues facing early commercial development. At first, schooners and brigs transported people up from California and the rest of the Pacific Coast. For example, the steamship Orbit took Olympia founder Edmund Sylvester back to Puget Sound after a failed expedition in the gold rush.(Findlay and Paterson)

But as the population of the Pacific Northwest grew, so too did its need for transportation of goods. Steam, rather than wind and sail, was the preferred propulsion at the time. As a result, a steady stream of steamships were coming and going from the many cities on the coast. Early on the boats went where ever they were needed, and where ever the captain and the company could make a profit. But as the fleet grew along with the industrial and commercial activity the boats began to follow a more structured schedule.

As the fleet and its surrounding industries grew, ships were produced locally instead of only being built in California, the East Coast, or overseas. They generally followed a simple but elegant design. They had steep and sharp bows, with softer sterns and a broad flat bottomed wooden hull. This allowed them to come closer to shore, and navigate the myriad channels of Puget Sound. Being able to get as close to shore as possible was very important, as many of the steamboats operated in areas without well developed piers and wharfs, and so either had to drop a plank directly onto shore, or have a series of smaller rowboats come to transport passengers or cargo to the larger ship.(Ibid)

While these boats all had a roughly similar shape, their sizes varied greatly. From small launches of less than fifty feet, to the largest three hundred foot vessels these steamboats and ships all serviced the same area and often in similar roles. Despite the size of even the largest boats, though, there was a constant threat of danger.(Ibid.)

Many of the steamship suffered explosions, collisions and running aground. One of the worst was the collision between the Dix and the Jeanie. The fix was cut in half, killing 45 passengers, all workers from the Port Blakely Mill.(Johnson)

By the 1920s the Mosquito Fleet was on its way out. Newer, faster and safer forms of transport, such as trains, cars and trucks had come into prominence and the traditionally dirt paths were finally being consistently paved. Despite this, though, ships were still being built, such as the Virginia V, built in 1922. But the writing was on the wall, and the last scheduled mosquito trip ran in 1939.(Ibid.)

While we'll likely never again see a swarm of steamships, schooners and ferries on Puget Sound, one can still visit Percival Landing Park, which only 100 years ago helped to connect Olympia to the rest of the nation.