The Oakland, MD post office was built under the Federal Works Agency in 1940, one of Franklin Roosevelt's New Deal government agencies. It is also home to a mural painted as part of the New Deal's art program. The mural, titled "Buckwheat Harvest," was painted by Robert Gates in 1942. It depicts a group of men and women harvesting buckwheat, a very common crop across Appalachia and in western Maryland. Gates was probably trying to remind viewers of a simpler and more abundant time to help them cope with the harsh realities of the Depression. 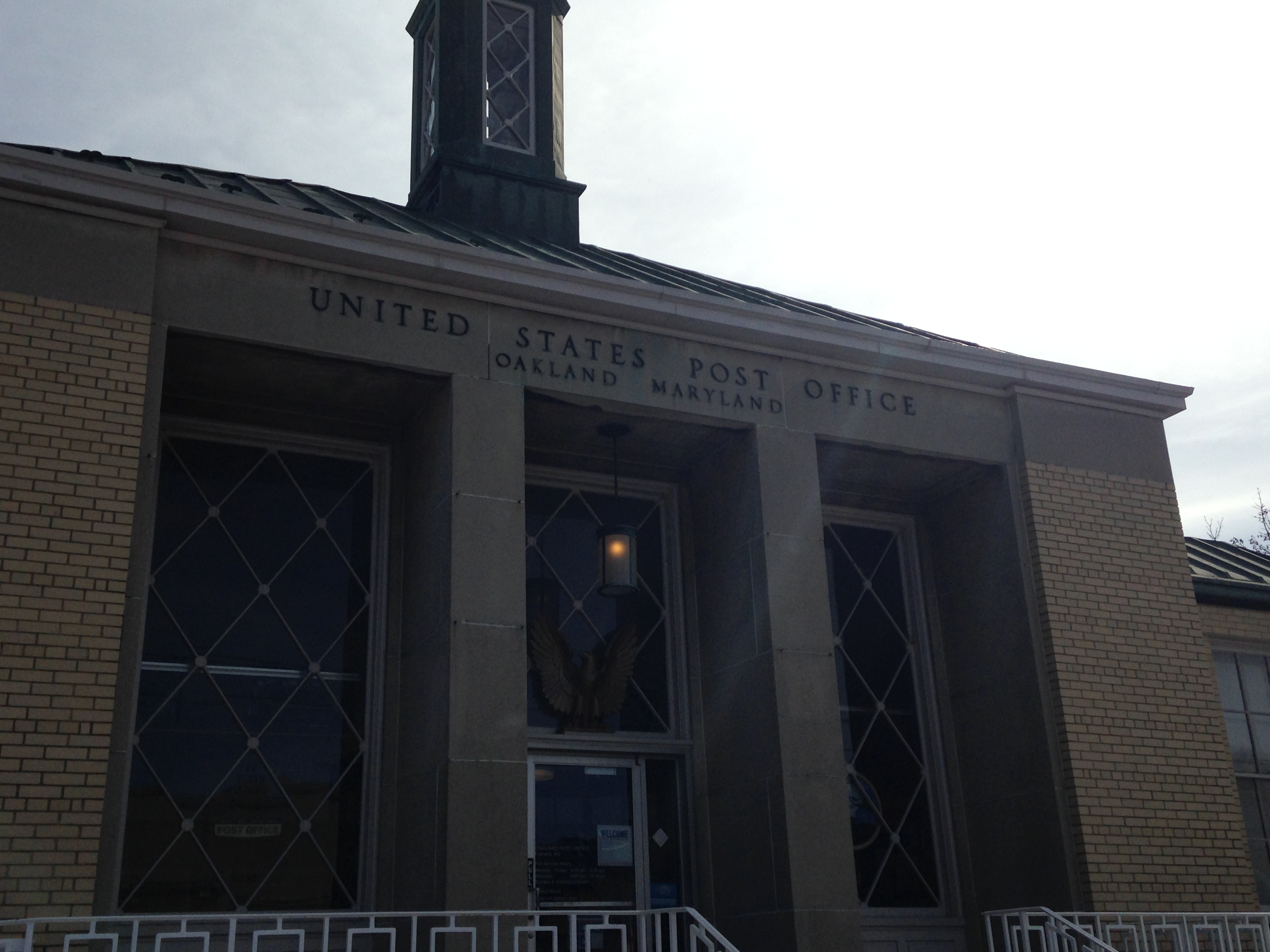 In 1933, the year Franklin D. Roosevelt became the president, the United States was in the midst of a great depression. After the stock market crash of 1929, stock prices fell drastically and people lost their savings. Banks and businesses started closing and the national unemployment was around 25% but some areas, such as Toledo, Ohio, and Lowell, Massachusetts experienced 80% to 90% unemployment. The entire country was struggling as the economy was becoming unstable. Banks were failing, homes were foreclosed, people were hungry and bread lines were outgrowing supplies. It was no longer possible to buy necessities regularly. The new mantra was, “Use it up, wear it out, make it do, or do without.” Families typically had only one source of income so once that person was without a job, the whole family was without support, often leaving five or more people without support for every unemployed person. Roosevelt was a well-educated lawyer from New York. He served two terms as a New York State Senator and was appointed Assistant Secretary of the Navy in 1913. This background in government and administration would be important when he later became President. In the Summer of 1921, Roosevelt contracted polio. He recovered but never regained use of his legs. Some reports have stated that Roosevelt’s character was strengthened as he fought to recover from this debilitating illness. Patience and an understanding of suffering probably influenced his candidacy as much as the support and encouragement of his wife Eleanor, with an amazing legacy of her own, was quite involved in the rebuilding of America during her lifetime. As layoffs increased, consumer spending decreased triggering a downward spiral that was running unchecked. It fell to the leaders of our country to take effective action to restore stability. President Roosevelt stepped in to take action by instituting a mix of different types of programs and projects (approximately 42) collectively known as The New Deal (sometimes referred to as the Alphabet Agencies because of the use of acronyms). This approach was met with quite a lot of opposition because the government had never before launched such massive social programs. In a climate of fear, the costs of untried ideas and the risk of failure could have derailed the process at any time. Through the Civilian Conservation Corps (CCC) and the Works Progress Administration (later changed to the WorksProjects Administration (WPA) unemployed young men with no other options were housed, fed, clothed, and given work to do. Many learned new skills that would improve their lives such as reading, writing, administration and carpentry. Public Works and Infrastructure were greatly improved through these and many other programs such as the Public Works of Art Projects. According to The Living New Deal, there were approximately 258 projects completed in West Virginia and this tour is a sampling of some of the work done in our region. Sources: https://livingnewdeal.org/what-was-the-new-deal/programs/ Fighting For The Forest by P. O’Connell Pearson, Simon and Schuster 2019 ISBN 978-1-5344-2933-8 The Tree Army by Stan Cohen, Mountain Press 2018 ISBN 978-0-933126-11-4